I woke up in a strange city on my wife’s birthday. I was alone. A chair was broken. 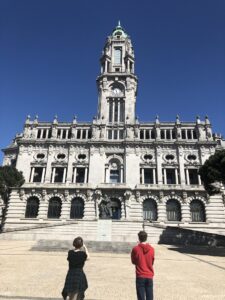 I’m afraid that introduction over-promises, and I will certainly under deliver. This was our first morning in Porto and, as I mentioned in our last installment, I slept like a log. That meant that, while I slept, the other old people (and Kenza) had woken up and gone for coffee. (The chairs were poorly designed, and, while Amy was putting on her shoes, one of them had broken. Later we found a storage closet where two other broken chairs were stored. All of this made us suspicious of another one of the chairs, which was wobbly, which we put in the corner so no one tempted fate.)

After a time, the others returned with some eggs and bread, and the kids surfaced. After breakfast, my crew – Amy, Cole, Harper, and I – headed out to explore the city. Porto is somewhat less hilly than Lisbon, smaller, and somehow feels a bit more like an American city. Not entirely, obviously, but in comparison to Lisbon. It might have something to do with the place being a college town. Also, my Wikipedia-level understanding of the history is that the Moorish occupation was much shorter than with Lisbon, and Porto has historically maintained closer ties with England over the centuries. Or maybe I’m imagining things. After briefly strolling around Porto City Hall and enjoying the magnificent tiles in the São Bento train station, we fairly quickly found ourselves on the top deck of the Dom Luis I Bridge.  We spent more time with the bridge the following day, so I’ll hold off on saying much about it other than that it’s a beautiful double decked bridge spanning the Douro River build by a student of Gustave Eiffel. 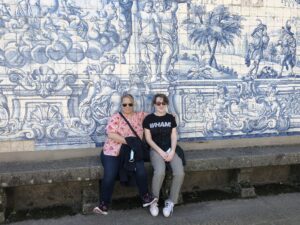 Harper and the birthday girl at the cathedral.

After taking in some of the views from the bridge, we returned to the north side of the river and made our way back to the nearby Porto Cathedral. It’s a Romanesque structure with towers, crenellation, and flying buttresses. So, it looks a little like a castle. Despite it being her birthday and her general unease with heights, Amy gamely went up into one of the towers with us. The interior was gilded and busy. These old, European Catholic churches give me an appreciation for how and why the radical Protestant reformers came to insist on simplicity in their churches. If one assumes that a relationship with God is to be direct rather than mediated through the Church, I can see how the interior of these places would come to be seen as wasteful and expensive distractions. Still, they are something to see, and this was well worth the price of admission.

Following the tour of the cathedral, we made our way down to the bank of the Douro River. Porto has a really cool riverfront. Lots of outdoor dining, buskers, and energy in general. It being a sunny and warm Friday afternoon in early spring, it was hopping! In fact, this was the only time during the trip that I felt like it got positively hot out. The forecast before we left the U.S. called for it to be raining and in the 50s basically the entire week we were in Portugal. We never felt a drop, but the weather was generally in the 50s and sometimes cloudy or windy. But, for a period of time that afternoon, it was sunny, 70s, and not much wind. Our sweatshirts came off, and we were regretting the long pants. 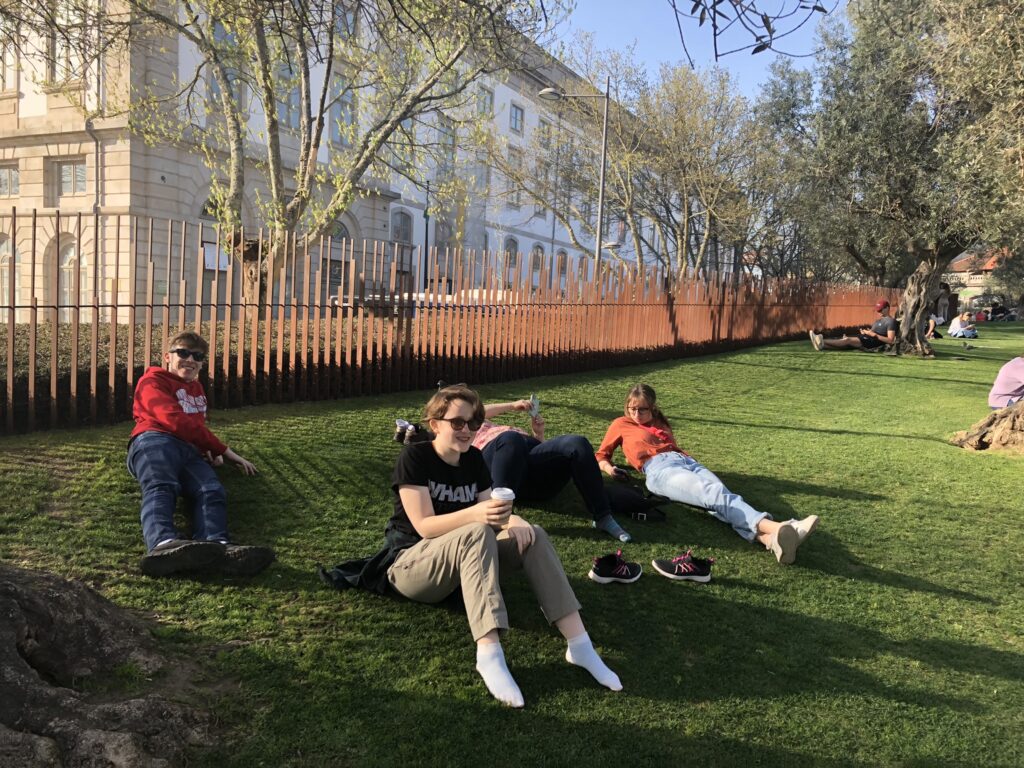 Sometimes, sitting in the grass is the absolute perfect thing to do.

We’d planned on meeting the other crew for a late lunch and, so, began the climb uphill from the river front. It was warm, we were walking a lot, and we hadn’t had much to eat. We were starting to bonk. We stopped in to a store for some drinks and some sunscreen. The guy working the cash register didn’t speak much English and, near as we could tell, not much Portuguese either. But, we figured out the transaction and made our way to Café Santiago for some Francesinhas. The restaurant was not really set up to accommodate a table of eight, so we basically remained split up, 4 and 4. A francesinha is a local Porto dish that Amy had had her eye on since we saw them in a Rick Steves video. It was entirely appropriate that we be able to hit Café Santiago on her birthday. Per the Wikipedia description, it is “made with bread, wet-cured ham, linguica, fresh sausage, steak or roast meat, and covered with melted cheese and a hot and thick spiced tomato and beer sauce, served with a side of French fries.” Amy and Harper split one. I was, frankly, intimidated by the description, so I got something similar but just a bit lighter on the menu. Everyone was more than happy with their selection. It was a fantastic lunch.

Properly fueled, we resumed our wanderings. The next stop ended up being a chocolate shop where we got a selection of chocolates and a round of hot chocolates. The hot chocolate was incredibly thick. It was like drinking the inside of a lava cake. By and by, we ended up at Praça de Lisboa which is a really neat park and commercial area. We enjoyed it just for its green space, sitting on a nice hill where we could do some people watching while kicking off our shoes and letting our dogs bark a bit. But, further in, there is a bar with low tables on the lawn, people sitting around them in the grass, studying, drinking, chatting, whatever. And all of this is kind of elevated. You find, sort of recessed underneath is a bit of an alley with stores. We didn’t take advantage of any of the commercial stuff, just the soft grass. At one point, I needed a bathroom and found a sign saying “WC” which I’d come to recognize as “water closet.” That took me to a stairwell which listed the women at “-1” and the men at “-2.” I went down two flights of stairs which spit me out into a parking garage. The “WC” signs were a bit ambiguous and kept leading me ever onward. I’d done quite a bit of walking and was starting to wonder just where the hell I was when I finally found the bathroom. It was serviceable but fairly disgusting. I went up the first available flight of stairs and emerged well away from the park, across and down the street a fair bit. The underground parking structure was apparently massive. 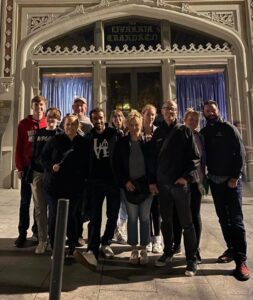 On the Harry Potter tour of Porto.

We capped off our wanderings with a Harry Potter tour of Porto. We met our tour guide at the São Bento railway station. This place is just beautiful. Wikipedia tells me that the vestibule has 20,000 azulejo tiles. There are depictions of battles and saints, travel and daily life, work and romance. Not your average metro station. The tiles took a decade to complete. Our guide met us between platforms 3 and 4 (there being no 9 ¾ here). He told us the train station used to be a convent and that the powers that be wanted to start building earlier, but one nun refused to leave and they had to wait for her to pass before construction could begin.

J.K. Rowling wrote a bit of Harry Potter in Porto, and a Brazilian student named Vini was a big fan and created a tour which combines places associated with Rowling as well as Porto places he felt were analogous to themes in Harry Potter, and turned them into our tour. Vini is an outstanding guide, very engaging and friendly. The tour itself was mostly just walking outside places where Vini would explain to us how they related to Harry Potter either through the literal presence of Rowling, presumed influence on the books, or sometimes just metaphorical similarities. Amy was, of course, the best at Harry Potter and, so, when Vini asked Potter questions, she was usually the one able to answer. In the course of our tour, we stopped at Manteigaria for some pasteis de nata. This was the place we hit on our food tour the night before, but, like I said, they were *so* good. We didn’t complain.

After the tour, it was about 8:30 at night, and we were hungry. Our first effort was to get a table at the sushi place near the tour’s end that Vini had said was very good. With no reservation, we were out of luck. We ended up at a place called Casa Guedes for a meal that was easily the most disappointing on the trip. I had a pork sandwich that was pretty dry and our table split a plate of fries that were bland and chewy. On the upside, their large beers were very large, so it wasn’t all bad. It had been another 25,000 step day. 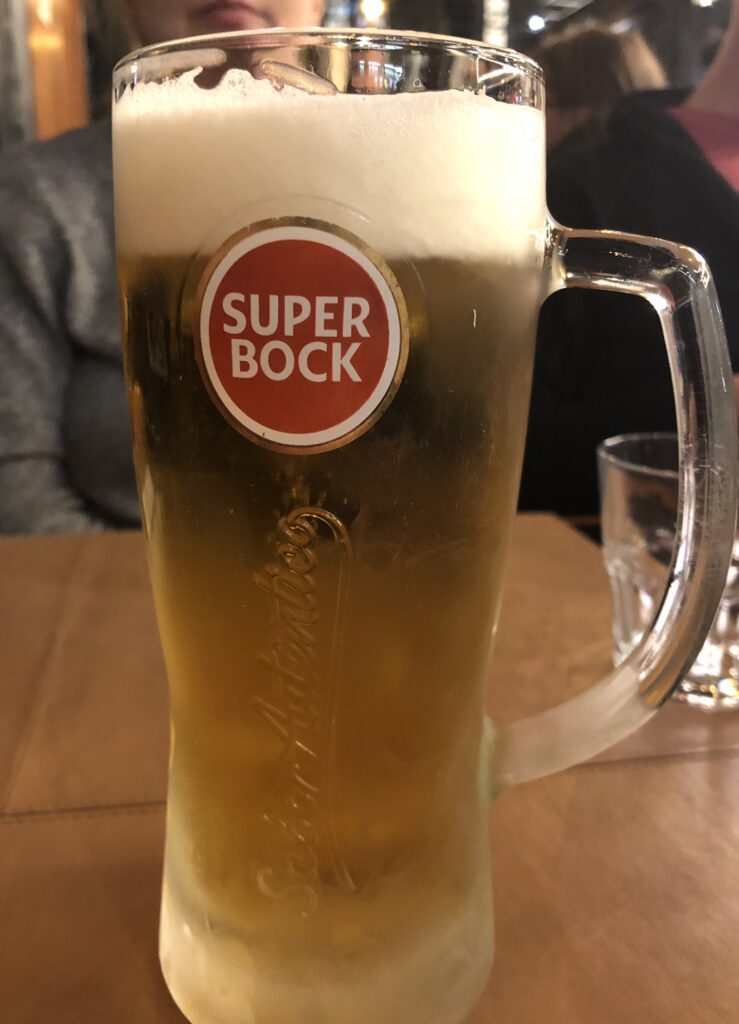