You are here: Home / Personal / Portugal Part I: Travel to Lisbon 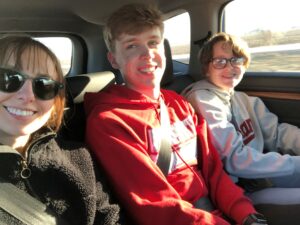 Packed in the back. On the Road to Chicago!

This was a trip that was supposed to happen almost two years ago. I think a lot of people are having trips like that. We started making the plans in the latter part of 2019. As originally contemplated, it was going to be longer and take place in June 2020. Amy and her sister, Suzie, were going to attend an international WordPress conference in Porto, Portugal, and we were going to extend the itinerary to include Lisbon, Madrid, and Barcelona. And then the world shut down.

Fast forward to 2022, and – after an impressive Omicron jag – COVID cases were low, vaccinations were easily available, and the world was more or less open again. Also, our Air Portugal credits from 2020 were set to expire, so we booked a trip for Spring Break. We banked on the fact that Cole was going to make the Indiana All-State band and scheduled our departure to be during Spring Break but after his performance. Suzie’s daughter, Kenza, drove up from Tennessee, we caught Cole’s performance on Sunday the 13th, and headed up to O’Hare that evening where we also met up with Sydney, Kenza’s step-sister. I suppose a dramatis personae is probably in order at this point: Myself, 50 year old Midwestern ne’er do-well. Amy, my long suffering wife and chief architect of this expedition. Cole, my son, age 18. Harper, my daughter, age 16. Amy’s sister and web-design business partner, Suzie. Suzie’s husband Matt. Suzie’s daughter, Kenza. And Matt’s daughter, Sydney. 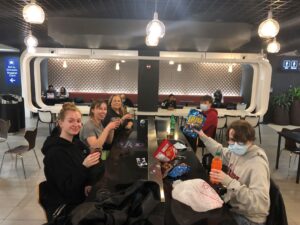 Amy & Kenza saved the day with cart booze and snacks!

When we got to the terminal, all of the restaurants and bars were closing down, which seems like a money-losing proposition. Even though it was a Sunday night, there were clearly still a lot of people in the terminal willing to spend money. But, Amy & Kenza saved the evening, bringing back an armload of booze and snacks from a cart that was just about to close. We set up shop at an empty section of the closed food-court and waited for our flight. Eventually, we made our way to the gate. The number of people getting turned away at the gate because they’d neglected the airline’s instructions to get a negative COVID test was, frankly, stunning. We must have counted at least 10 when while we were sitting there. O’Hare has a place where you can get the test if you wait until the last couple of hours. But waiting until the last hour on a Sunday night made it impossible for them to get back to the facility, get tested, clear security, and get back to the gate before the flight departed. The next flight out wasn’t until Wednesday. I can’t imagine spending that kind of money on international travel and then ignoring the travel requirements. Amy had us scheduled for a regular test on Friday and then a back up, rapid test for Sunday afternoon, just in case. (The regular test worked out fine, no problem.)

The flight was uneventful. Took off at around 11:15 (Central Daylight) and landed at about noon Lisbon time. Customs seemed like it was moving along fairly rapidly but at one point turned glacial. I think it was a shift change. We arranged for a driver to pick us up from the airport since we didn’t know our way around town yet. Fabiola was from Brazil and was terrific. She is originally from Brazil and is learning English. While I would always recommend learning as much of the local language as possible, I have to say, our almost total ignorance of Portuguese didn’t hurt us much. Seemed that most folks knew at least some English, and usually quite a bit. I know a fair amount of Spanish, so signs and other written material was usually pretty easy to follow. But understanding spoken Portuguese is well beyond me. 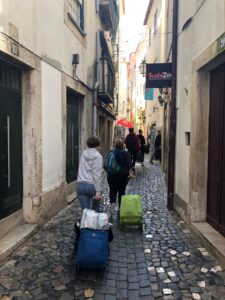 Through the alley, across the cobblestones, to the right, then up, up, up, and up a little more.

We met up with Matt & Suzie who had been in Lisbon for a couple of days. We had Fabiola drop us off at the little two-person studio they had rented because the four bedroom Airbnb we had booked wouldn’t be available for a couple of hours. In retrospect, with the delay in clearing customs, we probably could have just been delivered straight to our apartment. It was not that far from Matt & Suzie’s location, but that part of Lisbon is either in or very near the Alfama neighborhood and very hilly. So, we found ourselves dragging luggage across cobble stones and stairs, mostly going straight up. It was quite the workout!

We hit a grocery store for some necessities (chief among them, beer and wine). Cole, being 18 and legal to drink in Portugal, had his first (to our knowledge, and probably in reality) beer and wine samplings and hated them both. However, throughout the rest of the trip he would take well enough to the beer. Properly fortified, we headed back out into Lisbon to look for some dinner. Monday nights seem to be a slow night for restaurant operations. Matt had scoped out some likely locations in the previous few days, but they were closed. We ended up at a place called Grehaldor de Alfama.  The restaurant was at a location that seemed to be catering to tourists, but it was a cozy place that seemed to have a husband and wife running it. It could have been a function of a long day traveling, but for me, everything I ate there was fantastic. The lady taking our orders told me I didn’t want the sardines when I tried to order them, so I ended up having salmon and then variously eating the bass, steak, and cod that others didn’t quite finish. There was also some kind of sausage appetizer to which flame was applied at our table. It was also very good. We then climbed the hills back to our apartment and promptly crashed. I slept for about 11 hours. No problem with jet lag! 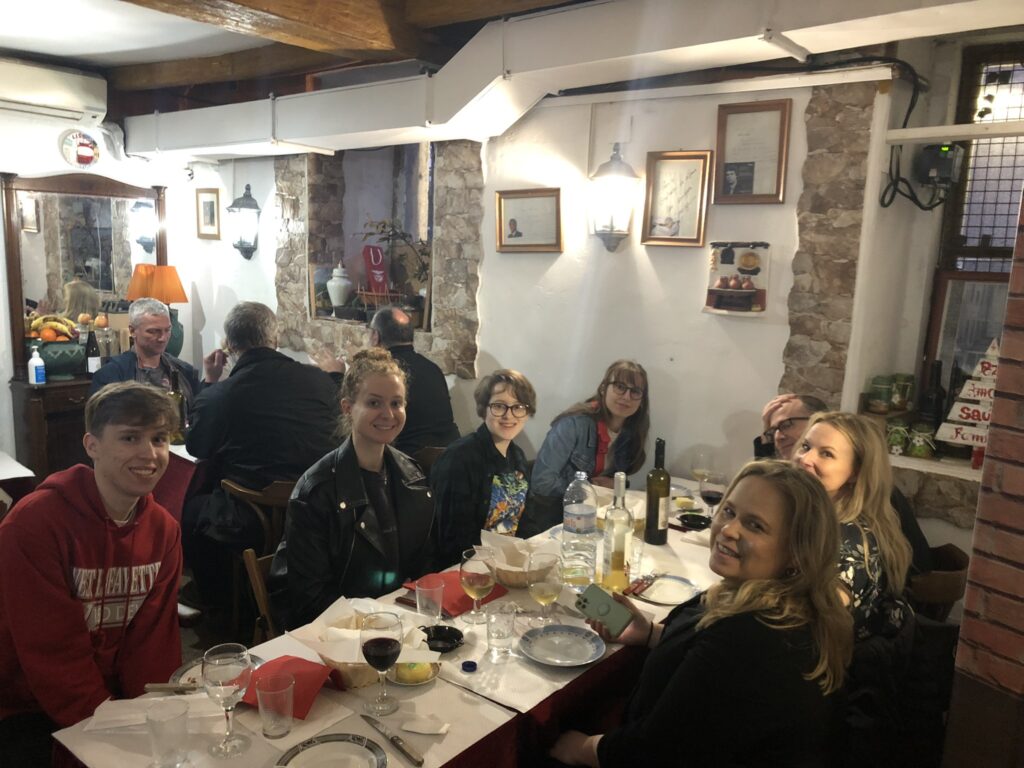 All together for a fantastic dinner in Lisbon!