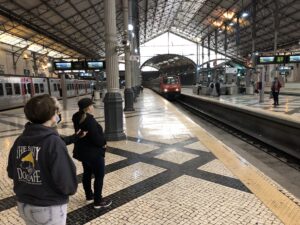 Waiting on a Train

The day began in the usual way with pastries and coffee at the local pastelaria, taking home piles of pastries for the kids. The plan for the day was a trip to Sintra, a town about 17 miles west of Lisbon. Only it was Europe, so they use kilometers and there are more of them. The good news is that it wasn’t raining. As recently as two days prior to us leaving on the trip, the weather apps were calling for rain basically the entire week. In reality, the only rain I experienced was during the five feet or so from an airport shuttle to the stairway up to the plane as we were departing. The bad news was that the day we were headed to Sintra, the winds out of the south were fierce and Saharan sand was in the air.

We made our way down hill to the Rossio train station where, following a delay owing to a bathroom search, we caught our train to Sintra. The train ride begins with a long tunnel which I found a little disorienting, but Wikipedia tells me is 2.9 km long and “is considered one of the most important works of engineering in Portugal.” We found ourselves in the Sintra town square and probably tackled the sightseeing in the least efficient possible way. The two main sites are the Moorish Castle and Pena Palace. Both places are cool, but less than authentic. The castle was built by the Moors in the 8th and 9th centuries after they conquered the Iberian peninsula. Its utility as a defensive site diminished over the years and, in the 19th century, Ferdinand II rebuilt the walls, replanted some trees, and manicured the grounds inside the walls. If I recall the plaques correctly, Ferdinand used the place for meditation and reflection. In the mid-19th century, the palace was on the site of a former monastery that was reduced to ruins by the 1755 earthquake.  The design is pure storybook which is a little odd considering it was built and used during a time period recent enough to include a telephone. Essentially the sites were play things for Portuguese nobility. 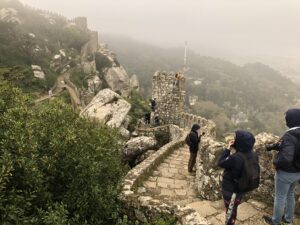 All along the watchtower, princes kept the view.

Even so, the first thing we wanted to see was the Moorish Castle. The thing about castles is that they work better when they are higher than the enemy. There are all kinds of options for having someone take you up to the top of the big hill – buses, cabs, tuktuks. But the area by the train station was crowded and we wanted to get away from the hordes. So, we just started walking and walking and walking, ever upward. It was actually a beautiful hike, but it did leave us with another 12 mile, 150 flight day.  The wind was strong, clocking in at 20 miles per hour, and as I mentioned, there was sand in the air from the Sahara. This phenomenon apparently affected a broad patch of Europe, including at least Spain and Germany as well.  For the most part, the hills surrounding the castle sheltered us from the wind, but occasionally you’d crest a hill or find yourself exposed to southerly winds and you could really feel it. You didn’t want to be wearing your hat when you climbed on top of one of the towers. Even with the dust limiting visibility, some of the views were pretty amazing. On a clear day, you must be able to see forever.

From the castle, we hiked down a bit, then took a bus from a lower parking lot up to the palace. By the time we got there, the dust was really obscuring any kind of view. The inside was kind of weird just because the furniture was recognizable – a lot of stuff that you could imagine maybe a rich grandparent having. It lives in an uncanny valley that’s not contemporary and is maybe historical, but only just barely. The colorful towers were pretty though. 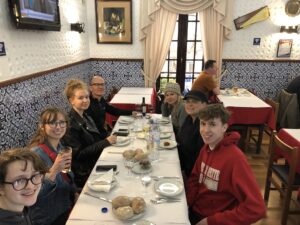 By that time, it was probably 2 pm, we’d been working hard, and some of us were starting to bonk. It was a great time for lunch. Our food tour guide, Irene, had emailed us some potential recommendations, and we went with Apeadeiro. I had squid and chorizo. Harper had squid and shrimp. Both of them were good, but her fries were amazing. Sometimes it’s the simple things! After lunch, we broke up the band. Matt, Suzie, and Sydney headed back to Lisbon while Amy, Cole, Harper, Kenza, and I explored Sintra a bit more. Eventually it occurred to us that we didn’t know the train schedule. We got paranoid that the train that Google showed us might be the last one, so we rushed to catch it. I suspect it was not the last train, but better safe than sorry.

Once back in Lisbon, we still weren’t ready to be done, so we wandered. It seems to me that Lisbon would be a challenging place to live – although I’m sure you get used to it. But it is a remarkable place to be a tourist who is willing to walk but with no particular destination. The streets, alleys, stairs, and walkways twist and turn up and down, and it seems that there is always an unexpected and interesting shop or restaurant or bar crammed into every nook and cranny. In our wanderings, we came across a place purporting to be the world’s oldest book store, the Livraria Bertrand. 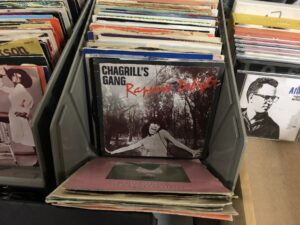 I said-a hip, hop, the hippie, the hippie
To the hip hip hop-a you don’t stop the rock.

At that point, Harper was fading but Amy, Cole, and Kenza wanted to keep exploring. Harper and I started making our way back to the apartment. However, we hadn’t made it too far before we found a little record store that we had to check out. Harper has a turntable and is a budding fan of vinyl. This place had bins full of random 45s they were selling for 1 euro apiece. Harper picked up “Amanda” by Boston and “Come on Eileen” by Dexie’s Midnight Runners. I passed on but probably should’ve bought a copy of “Rapper’s Delight” by “Chagrill’s Gang.” When I got home, the Internet told me that this is an obscure Portuguese knock-off of the famous version by the Sugarhill Gang.  As we were leaving, what appeared to be the owner’s buddy came in with an armload of cold Super Bocks and was popping the tops. Tough to say whether they were making any money, but listening to music and drinking beers doesn’t seem like a bad way to spend a Wednesday night in Lisbon.

From the record store, the rest of the walk was surreal. We were following the path given to us by Google Maps. There was an outdoor escalator. There was an impossibly narrow alley. Then we passed a staircase that Harper said she was glad we didn’t have to take. But I’d navigated too far. The map was taking us up the stairs.

We have since named it the Stairway to Heaven. Just a never-ending staircase that went between buildings in some cases and between barren, graffiti-filled walls in others. We passed a guy talking on the phone about an increase in income which he planned to use to get a garden. Harper is convinced this was about drugs somehow. About 2/3 of the way up the stairway (though, at this point, we didn’t know how long we had left to climb), Harper was absolutely gassed. But, she heard some voices behind us and was paranoid, so she soldiered on. (To be clear, we never caught a whiff of trouble or danger from anyone the entire time we were in Portugal. But, it was dark and the environment was strange, so the mind plays tricks.) At long last, we made it to the top and, much to our surprise, we recognized the place. The point where the stairs ended were only about 1.5 blocks from our apartment. Home at last.

I’m certain that those stairs weren’t anywhere near as long as what they seemed at the time. And they will just grow longer, steeper, and weirder as we tell this story in years to come. And that’s what I love about these vacations. One day, Harper will probably be telling her kids about that walk home. It won’t be a big deal. Nothing life changing. Just a fun, peculiar moment with her Dad. And, even if we didn’t do anything else on this trip, that memory would’ve been worth all the price of admission. 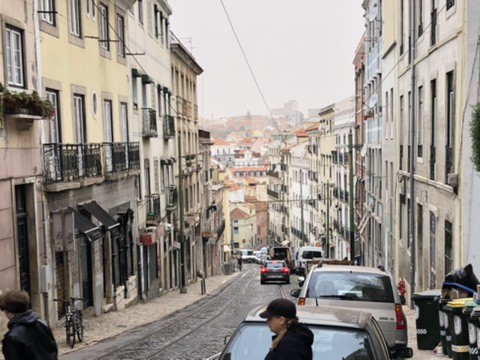