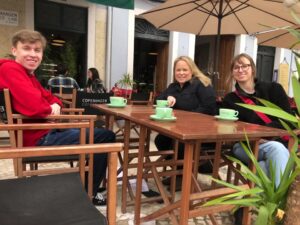 I love the outdoor breakfasts!

Thursday was St. Patrick’s Day. So far as I could see, nobody in Portugal cared. The early risers decided to change things up for breakfast, and we went to Copenhagen Coffee Lab instead of our normal pastelaria. This was a chain restaurant, but not one we have at home, so we figured it was o.k. Amy, Cole, Kenza, and I made our way down (in Lisbon, you always remember whether the destination was up or down) to the restaurant. I had a double espresso along with some salmon and eggs. I am not used to espresso, and even though I know it’s strong, even a double seemed woefully insufficient given how little liquid was in the cup. After sipping the stuff, I realized it was plenty. It’s definitely potent.

We were headed to Porto that day and had to check out of our Lisbon apartment by 11, so we headed back and finished packing. There had been an incident with some wine and a chair the night before. Matt and Suzie were taking care of clean up. They indicated they were making progress. I was skeptical. I think we’re still kind of holding our breath to see if an extra charge materializes. We took an Uber to Oriente Station where we caught a train to Porto. There was a brief period of irritation as the girls disappeared into the train station just before it was time to head up to the platform. We had plenty of time as it turns out, but I get anxious about time when I am unfamiliar with the schedules and the terrain. The ride was reasonably comfortable and uneventful. I mostly spent my time reading “Drunk: How We Slipped, Danced, and Stumbled our Way to Civilization” by Edward Slingerland. (His theory is that inebriation, despite its obvious costs, has adaptive advantages for primates forced into close proximity with one another and facilitates creativity and collaboration.) 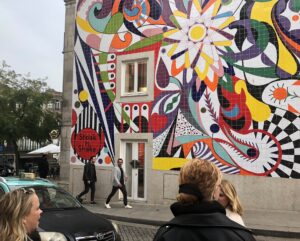 The Porto Steak n’ Shake looks just a *little* different from the ones in Indiana!

When we got to Porto, the station was under some construction, so for ground transportation, the signs had us exiting through featureless hallways and onto the sidewalk of a side street with no particular markings. We called another Uber that found us with no problem. But the second car for the rest of the crew was not so efficient. It took that group quite sometime to summon a car that could locate them. The Porto apartment made a good first impression. It looked clean, comfortable, and fairly modern. I think some of this was illusory. It wasn’t a bad apartment, but the furnishings made it look more comfortable than it actually was. And the layout kept confusing me. The door to the exterior hallway opened into a main living room with two side doors, one that led to an interior hallway going to the bedrooms and one that led to the kitchen. I think my confusion stemmed in part from the hallway to the bedrooms being between  the kitchen and the dining table. On some level, I think I kept expecting the door closest to the table to lead to the kitchen.

Cole and I immediately got the lay of the land by heading out on a quick beer run. There was a little store about two blocks away. (If we read the signs right, it was also next to a 24-hour marijuana dispensary). I grabbed a warm 15-pack of Super Bocks and two cold mini-bottles that we carried home. The cold mini bottles were a good idea, but the warm beers ended up being largely wasted because we just didn’t spend enough time in the apartment to drink them over the next couple of days. After unpacking and some beer, wine, and snacks, it was time to go on our food tour of Porto. We made our way down to the World War 1 memorial where we met our guide. I’ll call her “Julie,” but I’m not entirely sure I have that right. She was from France and married to someone local and was super nice. This tour was maybe heavier on the drinking than actual food when compared to our Porto tour. Whereas Irene in Lisbon was a chef, Julie was more of a drinking buddy. So, it was fun, but the cuisine was not quite as good. 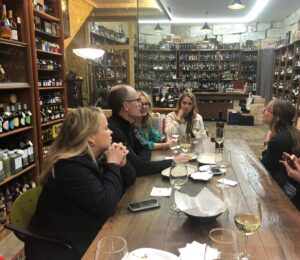 A bottle shop with all kinds of wine and tinned sardines and mackerel. One of my favorite stops!

Our first stop was for salty snacks at Paderia Ribero. This ended up being a place central to our future journeys, and we got comfortable using their bathroom over the next couple of days. Also, it was next door to a Steak n’ Shake which was pretty amazing to me. I didn’t even really think they had those outside of Indiana, let alone in Portugal. Wikipedia tells me they opened a few in Europe starting in 2014. Our second stop was at the Patio d’as Maria Merceria.  I think this was more like a specialty grocery where they seated us and served us down in a basement where we had meats, cheeses and port. Port is just a bit sweet for my tastes, but the set up was great, and I certainly like meat and cheese! Third on the tour was Garrafeira which was a cool bottle shop. We were set up at a long table and served sardines, mackerel, and green wine. The kids were maybe a little too enamored of green wine! It’s sweet and a little fizzy, so I can see the appeal. Since he’s 18 and it was legal, we were kind of letting Cole set his own pace with beer and wine. Further research suggests that Harper was probably also legal to drink. Even though we thought the drinking age was higher, it was pretty clear nobody cared if a 16 year old with her parents was drinking wine. Still, we kept a closer eye on Harper’s consumption. 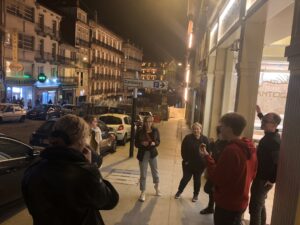 Enjoying pastéis de nata out on the street.

Stop 4 was Tasquinha dos Sabores. The bread was good, and there was some wine. But this stop was a little bit forgettable. That might not be the fault of the restaurant so much as its position in our tour. Unlike everywhere else, there was quite a bit of food left on peoples’ plates. Stop 5 was Manteigaria for some pasteis de nata. They were *so* good here. The pastries had just enough crunch and the custard was not at all gelatinous and was delicious. And, the final stop on the tour was Capela Incomum which is a chapel converted into a really cozy place to have some drinks. The layout gives it a kind of atmosphere that I don’t really see in bars and restaurants in the Midwest. We had some kind of dessert wine which, again, was a little sweet for my tastes. But, still I was happy to have been there.

On the walk home, we encountered an initiation of some kind. A fairly large crowd of young adults, chanting, singing, and clapping which attracted various onlookers – ourselves included. Kenza, curious and always happy to strike up a conversation with a stranger, started talking with a guy from Iran who was in Porto by way of Finland. He said that these were nursing students being initiated and that it had been going on every night for 10 days. Eventually, the routine was that they’d end up in the fountain. We didn’t stick around to see that. It had been a long day, and I slept like a log. 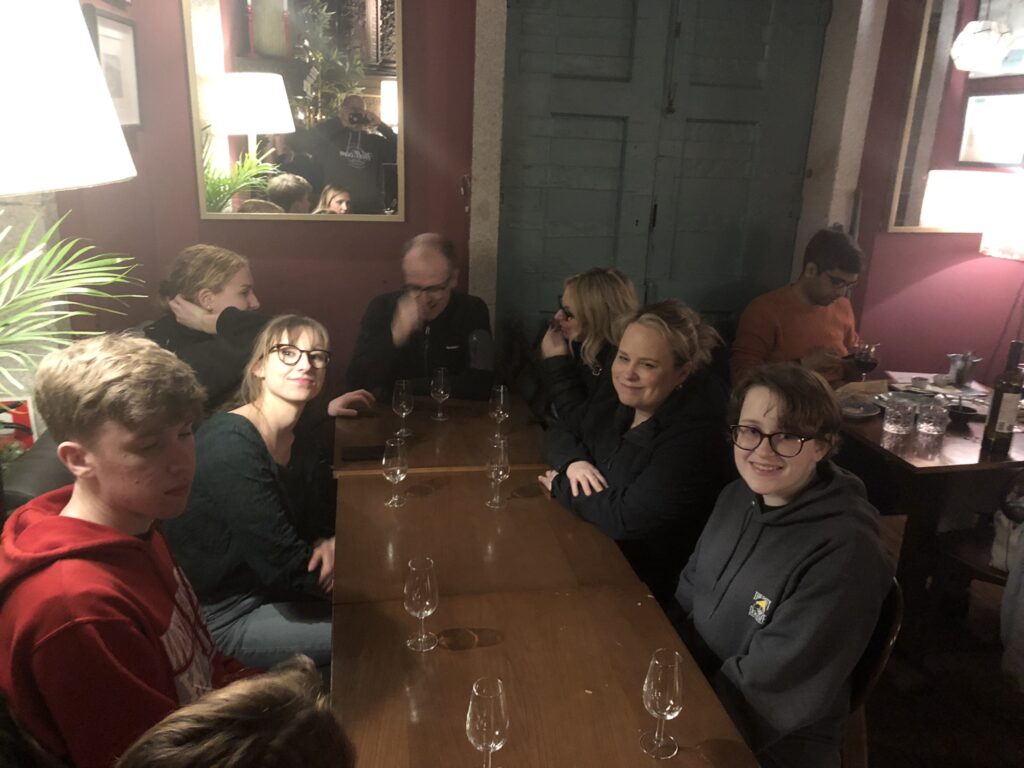 Last stop – a cozy table at Capela Incomum. There was even a mirror so I could get in the shot!