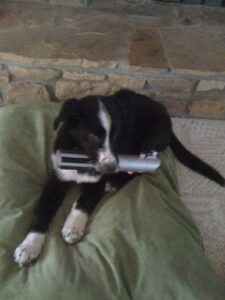 The force is strong in this one.

We had to put our dog Ollie to sleep last night. I started this blog with a remembrance of my dog, Shady, when she passed away more than 16 years ago. In July of 2010, we had to put our dog Keesha to sleep. And, in February of 2011, we lost Brooksey. We’ve had a good long stretch of healthy dogs since then. But, this is the hard part of dog ownership. They bring such joy, but the sadness at the end of life is part of the deal.

It was not long after Brooksey’s death that my wife was looking for puppies. She visited a lot of dog sites on Facebook and whatnot and would periodically send me pictures of puppies that she thought we really needed to have. It took me longer to get over the sadness of losing Brooksey and Keesha so close together and, frankly, the exhaustion that came with tending two dogs who grew very old at the same time. Eventually I acquiesced. She showed me the picture of a good looking puppy from the Peru animal shelter site. As I recall the story, he’d gotten loose from a place near Peru, and the owner didn’t want him back. So, I like to think he lucked out of a life of neglect to living with us — which, truth be told, his a pretty cushy posting for a dog. The folks from Peru met Amy halfway at the McDonalds in Delphi. I don’t think the paws had ever been visible in the pictures we’d seen. They were enormous. Amy brought him into my office on the way home, and my law partner commented on his tiger paws. Taking him for a walk his first time out, we heard this enormous bark coming out of the puppy with — getting gross for a moment — some poos to be reckoned with! This was going to be a bigger dog than we’d anticipated. 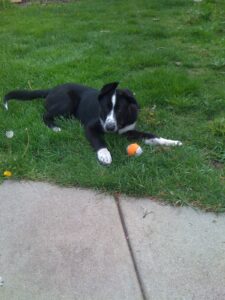 What had been billed as a “black lab mix” may or may not have had some lab in him. But he definitely had some Great Dane. And, we think, border collie. When another dog would be coming the other way, he’d crouch down like a border collie — as if hiding in the tall grass to pounce. The idea of stealth from a Great Dane mix on a suburban lawn was pretty funny. He was a challenging puppy — the size and energy was a daunting combination. We got in the habit of giving him kongs filled with frozen meat and cheese and rawhide first thing in the morning, just so we could have some time to wake up before he was on top of us. This became a life long entitlement. I’m happy to report that on the morning of his last day, he got to enjoy his kong and rawhide treats.

Ollie liked to lean on you. A “mighty lean” I called the good ones! It was his way of giving you a hug and saying good morning. He loved a good game of tug. As he grew large — 90 pounds or so — this became a real test of strength. When he was playing with you, sometimes he’d actually bend his front paw around your ankle to “hook” you. He loved his rawhide and he loved his walks. But, truth be told, he was something of a mess when another dog came around. He so desperately wanted to get at the other dog. And he must’ve looked like a menace to someone who didn’t know him. 90 pounds of urgent enthusiasm, struggling against his harness and his walker (almost always me) to get at the other dog. Once he got there, he was friendly, but we usually didn’t let him approach out of respect for the other dog owners. I feel like this habit intensified when we got Milo. 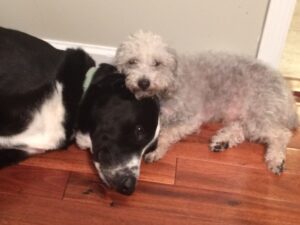 We got our other dog, Milo, in 2015, when Ollie would have been about 4 years old. Milo is a schnauzer/poodle mix (“schnoodle”) and when we got him, he was *tiny.* Ollie simply did not know what to make of Milo at first. He was interested when Milo came home, but so anxious about the whole thing that he was drooling buckets. It never occurred to Milo that he was smaller than Ollie. They’d play, making horrible noises at each other, and tiny Milo would give as good as he got. Giant Ollie and tiny Milo were such opposites and such good friends. They reminded me of the Spike and Chester cartoons where Spike was a big burly oaf and Chester was a yappy, peppy, and perky smaller dog talking trash because he had the big dog as muscle. As I said, Ollie’s bad habits with other dogs seemed to get worse when Milo came along. Milo would get loud as other dogs approached — not so much, I don’t think, because he was so interested in the other dog, but because it was fun for him to wind up Ollie. 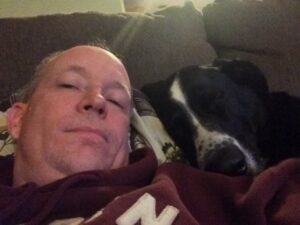 On hot days, after our walks, if we didn’t close the dog door, Ollie had a tendency to slip out into the back yard and go for a dip in the pool to cool down. That wouldn’t be so bad except that he had a tendency to come back in and dry off on the couch — which apparently makes for a magnificent towel. His enjoyment of our pool earned him an occasional stint as the local Crystal Clear Pools mascot. (They had a picture of him floating on a raft in our pool which they have repaired and maintained over the years.) Other than getting hot after walks, Ollie was remarkably indifferent to weather. Rain, shine, hot, cold, he was happy to be outside. I don’t know that this description will mean anything to readers, but he was the “doggiest” dog we’ve had. He loved his people, but he was just kind of motivated by food and walks and other dogs. (Random detail – before walks, he’d go up to the door and stand close to it, but when he had to move because of some excited energy, he’d turn in a quick circle.)

The decline came fast. We anticipated that he wouldn’t be the type to grow old gracefully, but even so, this was unexpected. At 10 years old, which is somewhat old for a large dog, he was still energetic and fairly spry. On March 15, Amy and the kids had left for Spring Break. I got a text at work from a neighbor who’d found Ollie and let him back into our house. I came back home because I suspected the back gate had blown open in the windy weather from the previous night. Sure enough, when I got home, he’d made his way (with Milo, his partner in crime) out the dog door into the back yard, out the gate, and into the front yard. I was in a rush, so I’m not sure if he was limping then, but when I got home from work, he was limping very badly. I took him to the vet the next day, and he had what amounts to an ACL tear in dogs. I don’t know for sure that it was related to his adventure, but it seems likely. On April 1, he got surgery for the tear. It’s a fairly long recovery, but he seemed to be progressing fairly well for the first few weeks. Initially, he had to be helped down the deck stairs to the back yard and we had to keep him on a leash back there so he didn’t run too fast and undo the surgical repair. But after 4 or 5 weeks, he was navigating the stairs easily, and we were giving him some unleashed time to lay around in the back yard on nice days. On one of those afternoons, he went tearing after a squirrel and, sure enough, started favoring that leg again. His progress was definitely set back. But, it felt like he was mending again after that.

Earlier this week, he was lethargic, not eating, and at one point seemed to have a dizzy/drunk spell. We had a dog with diabetes, and it looked a little like how she’d get when her blood sugar was off. We took him into the vet, and they kept him overnight and much of the next day. He had a fever and they thought it was an infection but they weren’t sure where. They had him on IV antibiotics and he perked up. He wouldn’t eat at the vets, but they thought that might be environmental, so they sent him home on Wednesday night. He ate well that night and on Thursday and seemed much better. Friday morning, he was positively perky – demanding his morning treats, pulling on the leash in the back yard when I took him out. He was still limping from the leg surgery, but other than that, all seemed well again. He was a little lethargic when Amy took him out around noon, but that could be attributable to the pain medication he was on for the leg. When I came home in the afternoon, he was in his crate. He didn’t come out to greet me which was a little unusual, but I didn’t push him to get up.

However, when it was medicine time, he wouldn’t even sniff the roast beef that it was wrapped in. We forced him out of his crate, and tried supporting him with a towel under his belly as a sling. Not only couldn’t he walk, his legs were criss crossing underneath him. We put him in a comforter as a make-shift stretcher and got him to the Purdue veterinary ER. The results were not at all the things we had been concerned about. He had blood in his stomach and a mass on his spleen. Invasive surgery was the only real option, but the vet gave us about a 30% chance we’d find anything operable and, even with that, there’d be a tough recovery on top of the potential neurological issues with his legs and his knee recovery. We made the tough call, which was made worse by how rapidly the situation had developed. He went peacefully with his family all around him.

I’ve been a dog owner for a long time and have been through a number of these decisions now. It’s never easy. But, what was especially challenging was watching my kids say goodbye to their dog. They have not been through so many of these, and they feel the pain much more keenly. Ollie came into their lives when they were 7 and 5 years old. All their lives, in a sense. That part was especially heart-wrenching. I’m confident we made the right decision, but – not to put too fine a point on it – this part sucks.

Good boy Ollie. We love you.