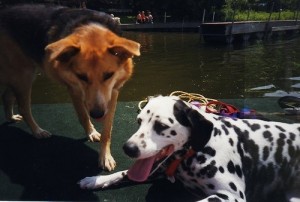 The problem with having dogs of similar ages is that they get old together. About seven months ago, we had to put Keesha to sleep. Today, we had to do that for our 15.5 year old dalmatian, Brooksey.

Amy had Brooksey before she had me. To give you some idea of how much I liked Amy from the very start, you have to know that Brooksey was an awful puppy. She just bit and tore and was generally a menace. I nicknamed her “Shredder.” Amy added the tagline (“the lesbian dalmatian”) because of Brooksey’s odd habit of mounting other female dogs. My early conversations with Amy often involved a puppy Brooksey gnawing on my wrist. Yelling at her, pushing her, nothing worked; except one thing. Pig ears were Brooksey’s kryptonite. She loved pig ears, but she was also mysteriously afraid of them. You could hold one out and it would ward her off for a time.

Amy’s first move seemed to calm Brooksey down. I think that first apartment was Amy’s sophomore year in college. She moved elsewhere for her junior year. After that, she wasn’t nearly as destructive – even though she had to put up with Amy’s roommate’s habit of flipping Brooksey’s ear backward and leaving it there.

Brooksey was extremely graceful, fast, and nimble. She could outrun our other dogs by an order of magnitude. She could turn on a dime. And, she loved running in tall grass. Absolutely loved it. The only time I saw her really come to harm from her all out running was one time at Southeastway Park in Indianapolis. She was going to leap up a small wall to the grassy area beyond, but the ground was just a little slick, causing her to miss her jump and crash her head into the wall. She went from a state of pure, speedy happiness to a sort of dazed confusion. The daze didn’t last very long, but there was a scary moment or two. It was a pretty solid blow. Much later, as she got older, she would occasionally forget that her body couldn’t maintain those fast turns – she’d make a cut and come up a little limping a little bit.

When we went for walks, Brooksey loved to play “the leash game.” For some reason, when we’d passed the half-way mark and headed for home, Brooksey would start jumping around and “attacking” the leash. Early on, this was a welcome change because she could be a challenge to walk — she’d pull as hard as she could, usually at a sideways angle. That is, until she found something to sniff. She had an outstanding sense of smell. Our shepherd-mix, Keesha, would frequently just rely on Brooksey to find the good smells, then go and body Brooksey out of the way.

Brooksey and Shady had a great time playing in our yard in Monticello. Brooksey would run circles around Shady, who would play along gamely. Brooksey would grab Shady’s collar and roll her, and then they’d get up and play again. Brooksey and Keesha had a much more complicated relationship. Brooksey had been a fairly spoiled, only child when Keesha came on the scene about 1.5 – 2 years later. And Keesha had to work out some issues from her time on the street – bullying Brooksey out of the way for food. After that, they generally got along very well; curling up together and being companions. But, every so often, Brooksey would get it into her head to be terrified of Keesha – usually when Keesha was curled up and sleeping. Brooksey would just regard herself as blocked and wouldn’t walk past wherever Keesha happened to be laying. This fear was despite the fact that, with one exception, they never fought. The one time was my fault, and Brooksey (literally) scared the crap out of Keesha. I had been sitting on the couch one Thanksgiving night, eating turkey out of a doggy bag. Shady was looking at me, coveting the Turkey. Keesha approached. Brooksey was curled up in a chair. Shady started growling this adorable puppy growl at Keesha. Keesha was pondering how, exactly, to put this upstart pup in her place. Then, out of nowhere, Brooksey latched onto Keesha’s neck. I had to basically put Brooksey in a scissor lock and squeeze her until she let go. Near as we can figure, Brooksey thought Keesha was threatening me and was coming to my defense.

Brooksey was the most cat like of our dogs. She was remarkably dense when it came to learning things that would benefit you, but could be quite clever when it came to communicating her desires. In particular, she was good at pawing in a very communicative fashion to let you know how you could best serve her. As a dalmatian, she was a rock star when we went for walks. Kids always wanted to pet her. She was reasonably tolerant of the attention but she certainly didn’t seek it out – and she got a little edgy when too many people crowded her. She was very delicate and would almost never lay on the hard, hard ground. She needed a blanket, or preferably furniture for laying on. Until very recently, she slept in the bed with us at night. That started the night before she had to go into the vet to get spayed. She’d go head first under the blankets and mold herself to Amy. Other times, she’d turn into “rigor mortis dog” – feet straight up in the air, making a little tent with the blankets. But, once she was on something soft, few animals could get as comfortable as Brooksey could get.

Unfortunately, toward the end, her body and mind started to go. Her tail started clenching under her body; her hind end was bent down; she began pacing incessantly; and, she began losing control of her bowels. She’s had a good long run for a dalmatian, but unfortunately it was time. She was the Alpha and the Omega of our dogs – at one time, we had three. Of those, Brooksey was there first and went last. We are dogless for the first time in a very long time. I doubt that will last too long. But, having very old dogs can be trying. It’s part of the bargain, and definitely the benefits outweigh the costs.

Good dog Brooksey. We love you, and we miss you.