You are here: Home / Personal / Keesha 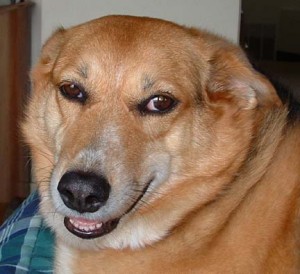 Keesha ready for some head petting

Today we had to put Keesha to sleep. It’s been close to five years since I last had to write one of these posts. In fact, the first ode to a dog who had passed, Shady, was the subject of my first blog post here.

Keesha was 14 years old. Amy adopted her from a shelter in Bloomington, days – maybe hours – away from being put down. She was only about a year old and as sweet as can be, but I believe she had been adopted by a family and didn’t work with them. In any event, the shelter was simply out of room. When Amy adopted her, she was skinny and shy. Mealtime with Brooksey presented some challenges because Keesha, having lived on the mean streets of Bloomington, gulped down food as fast as she could eat it and wasn’t inclined to share. Once she figured out that food would be steady, she settled down and let Brooksey have her share. (Not to say that Brooksey didn’t get nudged out of the way from time-to-time when there were tasty things in the dog bowls.) She quickly put on weight as well. In fact, she put on so much weight at one point that my buddy declared, “she’s an ottoman!”

About the only negative effect that hung on from her time as a stray (and this could have just been part of her nature) was her fear of thunderstorms. Back when she could get up into the bed, you were apt to wake up wearing Keesha as a hat when storms were rolling through.

She was generally the alpha dog, but not terribly assertive. She’d tolerate a certain amount of crap from overbearing puppies, but eventually she’d snarl them into place if they got too rambunctious. Brooksey and Shady never much challenged her. In fact, the only time there was an altercation between Brooksey and Keesha, Brooksey won decisively. It was my fault; I was on the couch eating some leftover Thanksgiving turkey out of a doggie bag. Shady was standing near me, hoping for some. Keesha edged closer, causing Shady to give a little puppy snarl. The ridiculousness of puppy Shady challenging Keesha with her tiny little snarl made me laugh. But that stopped pretty quickly as Keesha made some sort of move toward me (nothing aggressive – she was just trying to get some turkey), Brooksey came flying out of nowhere and latched on to Keesha’s neck (quite literally scaring the poop out of Keesha.) We think Brooksey thought Keesha was going to hurt me.

But, Keesha had the sweetest disposition. A stranger was just an opportunity for love. “Nobody loves love as Keesha loves love.” Her ears would go back on her head, her tail would wag hopefully, and she was just about impossible not to pet. She also had a great yowl – often heard when demanding her other great love: puppy treats. At the end, when she stopped wanting puppy treats, we knew something was desperately wrong.

Keesha had endured many health challenges over the years. At the end, she was blind, she had been diabetic and getting insulin shots twice per day for the past seven years, she survived a stroke two years ago, she had degenerative neuropathy (a doggie MS), and she had a mighty hump caused by a fatty tumor. For all of that, she still seemed to love life; happily demanding her puppy treat every day. As an old dog, she even learned a new trick a year or two ago. While staying at Amy’s mom’s house, Keesha learned that if she went outside there, she’d get a treat. So, she tried to parlay this into more treats at home – she’d ask to go out, step outside, then want to come right back in and get her treat. As I said, though, recently she did not take any joy even in that. And so, Amy and I had to make the decision to put her down. That was tough. Even tougher for the kids. Cole wasn’t old enough to know what was happening with Shady, and Harper hadn’t even been born. (In fact, Amy let me know she was pregnant with Harper the evening after we put Shady to sleep.) Needless to say, when we explained what was happening and let them say their goodbyes, Cole and Harper were very sad. I think they’re coming to terms with it, but it is a very sad thing when your dog dies, especially if you feel the duty to affirmatively act to end their suffering. 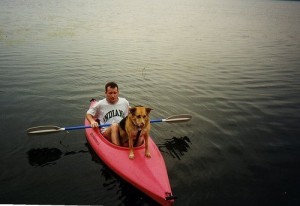 Keesha and me, kayaking at dog camp

Some other Keesha memories, in no particular order:

Apparently she climbed up to the top of the back of a couch up against a wall in Amy’s apartment in Monticello. It didn’t seem to dawn on her until half way across that it was, in Amy’s words describing Keesha’s thought process, “NARROW!”

We loved playing a game where Amy and I would stand a ways apart in the yard and call for Keesha. She would cheerfully come barreling (and there is no other way to describe her running other than ‘barreling’) toward the person calling her and get some love. Then the other person would call for her, and she’d happily barrel back. Rinse. Repeat.

Her hair would shed outrageously. Twice per year she’d blow her coat. And, when she did, she smelled oddly good.

Her hair was made for cooler climates. We used to joke that the happiest time in her life was when our furnace went out for a few days in the dead of winter. Finally, the house was being kept at a reasonable temperature and everybody wanted to snuggle up to her.

When we first moved into our house in Monticello, I loved watching Keesha and Brooksey tearing around excited about all the new space after having been apartment dwellers for so long. At some point while moving in, I saw Keesha eating a treat and didn’t think much of it, figuring Amy had given her a treat. Then about 10 minutes later, I saw her eating another one. Turns out she had found a tub with treats in it, and was just helping herself to them one-by-one. There was a similar type incident when she was down in Bloomington, involving a Taco Bell burrito. Rather than just wolf it down on the spot, she was caught slinking away to another room, holding the burrito gently in her mouth.

I think she hung on so long because she dearly loved her people; and certainly we worked so hard on her health for so long because we loved her. But, at the end, we all wear out one way or another and Keesha was finally at the end. She was a very good dog. Rest now Keesha. We miss you.