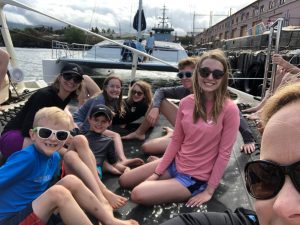 (This is part 3 of an account of our family vacation to Kauai in late May, 2019. I love the traveling, of course. But, I’ve found that having an account of the trip helps me to revisit these trips from time to time. So, while these posts are primarily for my own benefit, hopefully others might enjoy riding along with us, so to speak. Part 1; Part 2.)

On Sunday, May 26, 2019, I may have seen more beautiful things than I’ve ever seen in a single day in my life. It began at the cabins at Koke’e. An ambitious rooster woke me up at 2:30 a.m. I was able to go back to sleep and woke up for real at 5. We packed up and were ready to go at 6:30 a.m. (Recall that this was on the heels of a hectic schedule at home prior to vacation, a 24 hour travel day on Friday, and a good bit of hiking (with flat tire!) on Saturday.) 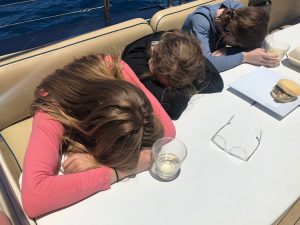 Among other things, we packed up the firewood we had bought for the cabins. It can get a little cool up as high as we were, but we had fairly warm nights and didn’t use much wood. This would come in handy later. The drive out of the park was tough. We were on a schedule, trying to make our catamaran tour before the boat left without us. We took a wrong turn, and then one of the younger boys threw up on the winding road. We had some anxiety about getting to the catamaran trip late, but ultimately we made it to “Captain Andy’s” on time. The vessel was comfy and the crew was good. There were about 49 people on board. I can’t remember our captain’s name, but he said he’d come out to Kauai because his mom was working in real estate there. He ended up pursuing his boating license and was now in charge of the catamaran up the Na Pali coast. Snorkeling and getting in the water on this trip is a little hit and miss, apparently. For us, it was a bit of a “miss.” We got in the water at one point, but it was a little choppy, and the visibility for snorkeling was limited. Doing cannonballs off the deck was fun though. 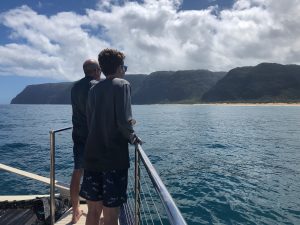 The boys had a slightly different experience.

With the choppy seas, about half of our party got sick. At one point, the girls all had their heads on a table at the back of the ship and looked like they’d been over served. Cole, on the other hand, had the time of his life. During the worst of it, he planted himself as far forward as the crew would let him and looked like a ship’s figurehead cutting through the water. He loved the bounce and the spray. Amy and Harper had a distinctly different experience. A pod of spinner dolphins swam alongside our boat, we saw flying fish, and towering over all of it were the otherworldly cliffs of the Na Pali coast. It’s as far west as I’ve ever been, and it was like the real world was giving way while we were on the Voyage of the Dawn Treader, headed for the far reaches of Narnia or something. 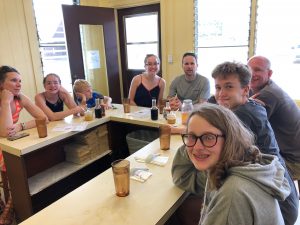 Ready for some saimin!

When we got back to shore, the girls made a quick recovery, and we made our way back east and north where we were staying in Princeville on the north coast. (The road doesn’t go quite all the way around Kauai, so to get to the north from the west side of the island, you have to go all the way back around via the east coast.) As we passed through Lihue, we stopped at Hamura Saimin. In general, we didn’t have as many successes with food as we had had on the Big Island, but Hamura’s was one of those great successes. Saimin is a Hawaiian noodle dish with Japanese, Chinese, and Filipino influences. It has noodles with broth and onions, fishcake, and spam or other meat products. Hamura’s is nothing fancy, just a lunch counter, with a few dishes, mostly saimin. It was terrific.

We finally made our way to Princeville and enjoyed some beers on the patio at the house we were renting.At the end of the day, we watched the sunset over Hanalei Bay from the grounds of the Hanalei Bay Resort. The popular site for watching the sunset was an immaculately groomed lawn at the top of a steep hill overlooking the bay. This was accompanied by what we’d come to call ‘sunset music’ – a few people would come out to the lawn of the resort overlooking the bay and play a tune on their guitar or ukelele as the sun went down.

Not really a good segue for this, but a few sidenotes: Keeping with our tradition from the last visit to Hawaii, we had the radio permanently tuned to the station playing island music. Harper quickly became the master of the island playlist – adding a song whenever we heard one that we particularly enjoyed. “Slippahs” by Kepa Kruse was my favorite. The three girls shared a room. Rather than sharing a bed, Harper decided to sleep in a chair with a footstool which she happily did all week.