(This is part 1 of an account of our family vacation to Kauai in late May, 2019. I love the traveling, of course. But, I’ve found that having an account of the trip helps me to revisit these trips from time to time. So, while these posts are primarily for my own benefit, hopefully others might enjoy riding along with us, so to speak.) 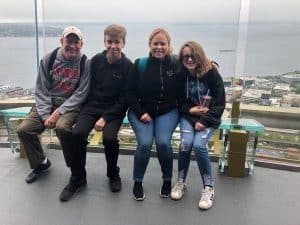 Photo Op at the Space Needle

It was one of those vacations that started with me coming in hot from my regular life. Lots of work stuff in April and May combined with soccer season left me feeling more like I’d simply abandoned my responsibilities rather than actually coming to a good stopping place. That was more illusion than real and probably illustrated the fact that I needed to take a break. We left on the afternoon of Thursday, May 23. Amy introduced me to Portillo’s on the way up to Chicago. The Chicago Dog and cheese fries were a good starting point for vacation.

We were catching an early flight out of O’Hare, so the four of us crammed into a Comfort Inn in Des Plaines that night. The hotel was relatively nice on the surface, but seemed just on the edge of falling apart if you scratch the surface: Just little things like a loose post on the baggage trolley and a wobbly rail in the elevator. The chief advantage of this place was that we could get a night’s sleep, leave our car for the duration of the vacation, and get a ride to the airport all for not much more than parking alone would have cost near the airport. So, despite my critiques here, it more than met our needs. Random note: Before falling asleep, Cole & I watched some video game championship that was being broadcast. Video games have come a long way! 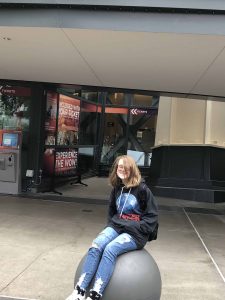 Harper at the Space Needle, humoring Dad with a picture

The next morning (May 24), Amy got up at 3:30 a.m. and the rest of us got up at 4 for what would end up being something like 21.5 hours of travel. At the airport, we met up with our family friends with whom we’d gone on a vacation to the Big Island four years earlier. The first leg from O’Hare to Seattle was uneventful. Harper had to sit in a row with strangers but she slept through most of it. (In fact, at one point, I think her head was on one of the strangers while she was asleep.) We had a 6 hour layover and decided to kill time by going out to the Space Needle. On some level, I thought this was inviting trouble because of the uncertainties of traffic and getting back through security. But, as usual, Amy has the better instincts on these things. None of that was a problem, and the side trip was more worthwhile than sitting in an airport terminal. Paulo was our Uber driver over to the Needle. He had the sniffles which I mention because, despite not being a germophobe in general, I’m always paranoid about getting sick before vacation. Once again, my worries proved groundless.

At the food court near the Space Needle, we introduced Cole to the concept of the “Bang Bang.” This was something our friend Jason picked up from a comedian somewhere. The idea is that you eat a full meal in one place and then immediately go to another place for another full meal. We’ve never actually done this, but “stop for a Bang Bang?” has become kind of a running joke. The Space Needle itself is touristy but at least briefly entertaining. Kind of perfect for a layover. The architecture is interesting, but you’ve seen it a thousand times before on TV and whatnot. You go up high and see the city. There is an area with a glass floor that’s fun. On the way back, our Uber driver was Paul. He liked to talk. He apparently met his wife at university in Arizona before returning to Seattle. He’d been to Hawaii with his family a few years back. His 60 year old mom did some cliff diving in Oahu. His wife was pretty far along in her pregnancy for most of the trip and somewhat limited on what she could do. (The trip had been planned in advance of the pregnancy.) So now you have the run down on Paul. 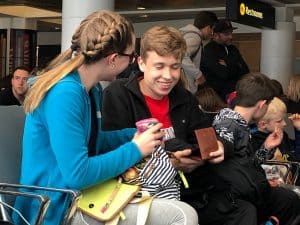 On the way back to Sea-Tac, traffic was light and security was minimal. We had time for a drink and a snack before our flight. Our next leg was Seattle to Lihue on Kauai. I sat with Cole and Madda, one of the daughters from the family we traveled  with. They’re both 15 and have known each other since preschool. As I recall, the fact that they were in preschool together is the reason our families know each other at all. (I have a theory that a lot of adult friendships feature oldest children of a similar age. When you have your first kid, you’ve entered a distinctly new phase in life and need friends who are in a similar phase. By the time you have younger kids, you’ve sort of filled the friendship rosters a little bit.) Anyway, watching these two laugh and joke with each other was fun. They don’t hang out a bunch anymore, but clearly they’ve known each other and enjoyed each other’s company for a long, long time. We landed in Lihue at about 5:30 in the afternoon (10:30 p.m. Chicago time at this point.) 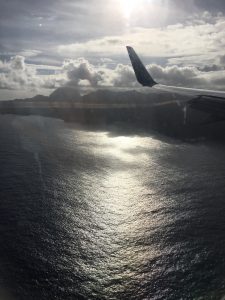 On the Road to Lihue

The car rental places don’t move with a lot of speed in Hawaii, so while Amy waited in line, I killed time watching the chickens outside. Kauai has a lot of chickens. Eventually they’d fade into the background, but at this point they were novel. There was also an entertaining moment where a girl of about 3 or 4 was waiting outside with her dad. He suggested they go check on mom inside. She had a cute little butterfly suitcase. Her face got stern and serious and she expressed concerns about people stealing her butterfly which was in front of the bench next to Cole & I. Clearly, we looked disreputable. From Lihue we drove about 40 miles to Kokee State Park where we were staying in cabins for the first couple of days. Along the way, we stopped at the Big Save in Waimea for supplies and squabbled about directions once or twice because it was dark and we were utterly exhausted. Finally, we finished the long, winding road (15 miles of twists and turns in total darkness) up to Kokee and got out of the car. We were at what felt like the edge of the world, at altitude, miles away from civilization, so the stars were spectacular. Cole was so deeply asleep in the car, it was a challenge to get him up. We used to just pick him up and carry him to bed, but at 15 that’s not happening anymore. Gentle voice, loud voice, light shake, light shake with gentle voice, light shake with loud voice, firm shake with gentle voice, firm shake with loud voice. A few of the latter got his body moving, but it’s clear that his mind was still checked out. We walked him to his bed and got him tucked in. Then we all collapsed and had a good night’s sleep.