(This is part 2 of an account of our family vacation to Kauai in late May, 2019. I love the traveling, of course. But, I’ve found that having an account of the trip helps me to revisit these trips from time to time. So, while these posts are primarily for my own benefit, hopefully others might enjoy riding along with us, so to speak. Part 1 is here.) 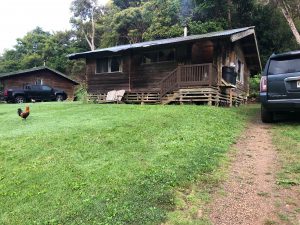 One of our cabins at Koke’e.

The morning of Saturday, May 25th began with mediocre coffee that tasted of onions. Probably had to do with the coffee maker in the cabin. The accommodations were pretty bare bones but serviceable. We had some scones from the Big Save that were all right. Then we went to explore Koke’e. Problem was that our car had a flat tire. We seem to have hit a nail or something the previous night and the air was completely out of it. Jason and I put on the spare. We handed the lug nuts to Cole and proceeded to make “Christmas Story” jokes. (“Ooh fuuudge . . . only I didn’t say “fudge.”) While we were changing the tire, some folks were setting up for the “Pedal to the Meadow” bicycle race – a 15.75 mile race that starts at sea level in Kekaha and ends in the Kanaloahuluhulu Meadow up at about 3,800 feet. Our cabins were about a quarter mile from the finish. After getting the tire changed, we finally got under way. We drove the rest of the way up Highway 550 where we stopped at the Kalalau lookout, the Pu’u O Kila Lookout, and hiked about 2 miles on the Pihea Trail. This area is on the highland above the northwestern part of the island, looking down to the Na Pali coast. “Rugged and beautiful” is a good description, I think. 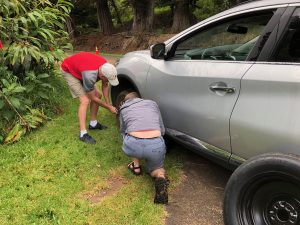 On the hike, I scared the two younger boys (ages 7 and 10), passing along my dad’s “mountain talk.” Some years ago, when I came out to Colorado to, among other things, explore the mountains there, my Dad who lived in Colorado was definitely happy to see me taking an interest. He was generally a jovial, jokey kind of person, but at one point, he got deadly earnest and told me, “Doug, if you don’t take them seriously, those mountains will kill you.” They are beautiful and fun to enjoy, but it’s not an amusement park. As we were hiking, the boys were getting a little close to the edges of the cliffs and whatnot, so I pulled them aside and gave them the talk. They don’t have a lot of direct experience with me, so I might have looked like a three-eyed monster to them at that point, but I think it left an impression. When we got back, we had lunch at the Koke’e lodge. The food was outstanding, definitely better than you’d expect from a lodge. 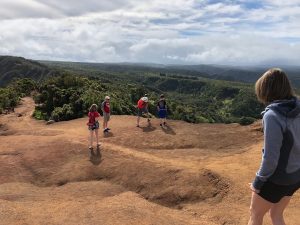 Living on the edge.

After lunch, due to the flat, Amy & I had to make the long drive back to Lihue to swap out cars with the rental agency. The roads in the state park were probably not a great idea on the doughnut tire. Theoretically, road side assistance came with the rental, but we had no cell service, so just taking the car back was realistically our best option. While we were at the rental place, Amy helped an Australian couple secure their child car seat which they were having trouble navigating. It’s been a lot of years since we had a kid in a car seat, but this is apparently one of those “riding a bicycle” things that you never forget. We also met some travelers from Logansport who were staying at the Marriott in Lihue.

On our way back, we stopped at some overlooks of the Waimea Canyon which is pretty incredible. Known as the “Grand Canyon of the Pacific,” it was created by both erosion – it takes in rainfall from Mount Wai’ale’ale, one of the wettest places on earth – and from the catastrophic collapse of the volcano that created Kauai. Meanwhile the kids stayed back with our friends. Jason apparently treated them to some off-roading in their rental car over some fairly rough terrain to get to a trailhead. Cole seemed particularly taken by the off-roading. (Just what you want when your boy is about to get his driver’s license.) From the trailhead, they hiked to a spot with a pool and waterfall that made for some good climbing and splashing around.

Dinner was improvised chicken and asparagus. The evening was rainy. We had 10 beers on hand that we split between the 4 adults and had generally a good time. Bed time was early as we had to get up at the crack of early to get to a catamaran trip the next day. As Hawaii time is 6 hours behind, Indiana, these time frames were no problem.