After three nights in the Rome apartment, we were ready to head to Florence. First we had to clean up the apartment and get breakfast. Dealing with trash is apparently a bit of an ordeal in Rome. We didn’t have much of it, but we had to walk it 3 or 4 blocks to a trash receptacle (only available during particular hours). Fortunately, there was a nice cafe nearby. (There’s *always* a nice cafe nearby). In this case, it was the Caffe Lungara 1940. I had a double espresso and a croissant. Amy had a cappuccino. Italian coffee culture is different from ours. We tend to drink more at one time and linger over it. I’m told Italians are more likely to drink it in smaller, more concentrated doses and stand over a bar to do it. The cappuccino is almost entirely a morning drink since it has milk in it. I’d never had espresso (double or otherwise) before. I enjoyed it — but, then I like my coffee strong anyway. The place had a retro decor. (I guess “retro” is relative in a place as old as Rome — think “Beatles albums on the wall.”) It also seemed to have more than its fair share of English speaking patrons. The staff was very friendly. 12/10 would recommend. 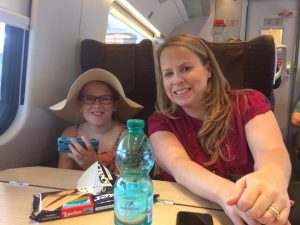 Train, train, take me on out of this town.

After a breakfast, we took a car to Termini Station which is the central train station for Rome, serving both the local trains and the regional trains. The news ticker on the TVs at the station were full of news about Trump’s abandoning the Paris Accords on climate change. The quote running was “Trump refuses the future” which, I suppose, tells you what you need to know about Europe’s view of the U.S.’s political situation. That said, the people we met did not seem to associate us with our country’s political situation. I can’t think of anybody who was anything but nice to us. A somewhat unexpected aspect of Termini: pay toilets. That’s a seller’s market, so we paid the price!

The train system was remarkably smooth. Mussolini may be gone, but the trains still ran on time. Everyone here should take the Rome to Florence train to see what’s possible. Compared to that ride, the Lafayette to Chicago train might as well burn coal and use a cow catcher. Indianapolis to Chicago would involve denser populations in both cities at a distance that is not terribly longer. We could do this if we wanted to. The Rome to Florence trip took 1.5 hours. The shorter trip from Lafayette to Chicago takes at least double that.

Some random thoughts about the trip:  I was a little surprised to find that my ears popped from pressure as we headed through tunnels. After reflection, I realized the train was acting like a piston when it went through the tunnel, so of course the air pressure would increase. The arid countryside between the cities reminded me a little of the Western Slope areas in Colorado. Finally, a warning sign on the train window told you that, in an emergency, you should break it with the Martello di Emergenza (“Hammer of Emergency”) which I think would make a good band name.

After hitting Florence, we dragged our luggage ¾ of a mile to our apartment on Piazza San Marco then up the stairs to another fourth floor residence. We didn’t have plans, so I was tasked with coming up with something. I found more green space. In this case, it was the Boboli Gardens which were across the Arno River and up a *steep* hill. The family called it “another one of Dad’s death marches.” Cole used the term affectionately. The rest of the family less so. On the way, we stopped at a little sandwich shop called Sogni E Sapori.  Cole and I had sausage sandwiches that were delicious. The girls had pasta which got the job done, but Amy strongly suspected it was warmed up in the microwave. 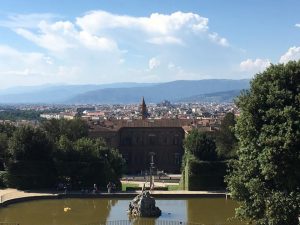 Too bad there wasn’t anything pretty to look at on this trip.

When we arrived at the Gardens, we hadn’t necessarily expected an entrance fee, but the fee was well worth it. Initially, where we entered wasn’t too impressive — a path through some corridors of bushes, but then it opened up to (yet another) incredible view. What was more, there was grass! The kids went barefoot. We had spent too many days with footwear on cobblestones. Because I’m 12 at heart, I cracked myself up looking at a statue that I affectionately referred to as Neptune’s Bidet because of the position of the fountain in relation to the statue of Neptune in the pond.

After wandering the park for awhile, we came to a broad clearing without many people and just relaxed, enjoying the day. Cole and I sat on the ground in the shade. Amy and Harper sat on a nearby bench. Eventually both of them were laying down on the bench. And then Harper was dead asleep on the bench. Travel takes it out of a girl! Probably this has something to do with the Bonine she took to avoid travel sickness on the train. (We have a nice collection of photos of Harper sleeping in various places during the vacation.) Leaving the garden, we stopped for gelato before our long hike home. One of my favorite stretches of Florence was the Via Romana running along the northwest edge of the gardens down a long hill to the Ponte Vecchio — a bridge over the Arno River with shops lining the edges. The Via Romana has an incredible array of shops and restaurants and all kinds of activity. 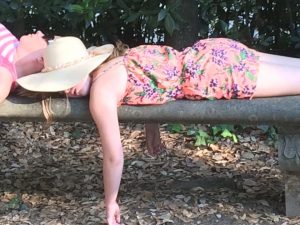 Impressive as the selections were, we were a little beat for dealing with a restaurant that night. So, we went to a grocery store not far from us. It had an impressive amount of stuff in a not very big space. It must be a challenge to supply these cities with such narrow streets and fairly cramped spaces. Being this old, the cities simply weren’t designed with cars and trucks in mind. That said, the streets of Florence were, by and large, less cramped than the streets of Rome.

Our apartment in Florence wasn’t quite as swanky as our apartment in Rome, but  we didn’t need a lot. This one had a small balcony with a view of the Duomo which was a really great view as we drank our wine and ate our meat and cheese to wind down the night. There were a lot of street noises. We were above a bus stop and, just generally, there is a lot going on. The ambulances are pretty frequent. And, at least on Saturday night, there was a happening party on a rooftop terrace a few buildings down from us. Sounded like they were having a great time. Also, they liked Led Zeppelin.