I wouldn’t call this a bad day, but if I had to pick a least favorite day, this was probably it. Even so, seeing Michelangelo’s David at the Gallery dell’Accademia was not something I’ll soon forget. Once again, this is a work of art that is recognized as among the best of all time, so I can’t add anything very insightful here. I’ll just say that the size and the detail are such that pictures don’t really convey the same impact as seeing it in person. However, the rest of the art collection did not speak to me. It was pretty exclusively religious and, after awhile, the paintings of Jesus and Mary kind of ran together in a way that they did not seem to do elsewhere (and, I’m sure you’ll be surprised to find there is a lot of religious art in Italy.)

Exacerbating this was the fact that a lot of the art was created before they had developed techniques such as perspective that make the art more realistic — the result being that, to my modern eyes, the images were fairly crude. (A lot of the Baby Jesuses had what looked to me like the face of an adult man, complete with receding hairline in some cases, rather than that of a child.) The plaques describing the work have the feel of an art student talking to another art student — assertions about the powerful emotion of a piece that, to me, looks like stick figures compared to later Renaissance work. I’m not trying to slag on this art – I recognize that my knowledge of such things is minimal. But it’s jarring to look at a work that does nothing for you then read about its supposed emotional intensity. So, for me, the David was very worthwhile. The rest of the gallery not so much. The kids held up pretty well, though you could see that the place did not much capture their interest either. (Again, aside from David.)

Not having a plan for the rest of the day, I went with my now standard approach of looking for a green space on the map and heading there. This time it didn’t work out for us. We headed for Cascine Park on the west end of town. The walk took us through what felt like a sketchy area of town, then the park itself — at the edge where we entered anyway — was pretty shaggy and didn’t have many people there. One kid riding a bike past us seemed to ride unnecessarily close to Cole, like he was trying to provoke a reaction before he avoided contact and moved on. I think if we had made it to the center of the park, we would have seen more people and more of interest. But, the place was giving us a bad vibe, so, we turned around before getting to anything much. It ended up being a pretty long walk (4 – 4.5 miles) for not much payoff. On the walk back, Amy and the kids got some gelato and I got a Peroni, so it wasn’t all bad. 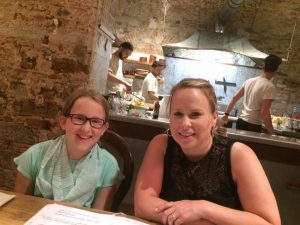 That night, we ate dinner at a place called SimBIOsi. When we got there, the host said it would be a 10-20 minute wait. Turned out to be over an hour. Adding insult to injury, they started handing out those free glasses of wine to people waiting but there were a lot of people waiting and they never seemed to notice us when they handed out the glasses. I get a little skeptical when places promote being “organic.” I don’t mind fresh, locally sourced, food that avoids processing, but I’m not a huge fan of the marketing surrounding these things.  That said, once we did get seated, the food was delicious. The lettuce in the salad was, in particular, ridiculously good. The seating is a long table that runs the length of the room where they sit you on both sides and you share space with other groups. We had some pleasant, but fairly minimal interaction with a British couple and then an Italian couple that were to the side of us. At the end of dinner, Harper finally got her cheesecake (which resulted in a retelling of the cheesecake nightmare story!) 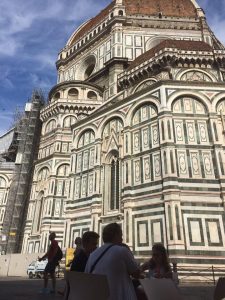 Admiring the understated architecture over breakfast.

Whatever Day 5 lacked, Day 6 made up for. We had 9 a.m. tickets to get into the Duomo museum. We couldn’t get into the Cathedral itself until afternoon because it was Sunday and, I believe, morning was reserved for services. So, we grabbed breakfast at a cafe across from the Duomo. It’s hard to describe how much I enjoyed eating outside in a beautiful plaza with this amazing piece of architecture towering over us. The museum devoted to the cathedral was spectacular. At one point, I was so engrossed in the sculptures cast into panels on the doors known as the “Gates of Paradise” that I bumped my head on the glass barrier. (Testament to how clear the glass was! Now I know how birds feel.)

I’m not sure how much the kids took away, but while we were learning about the construction of the Dome itself, I was very insistent to Cole & Harper about how the Dome was the kind of thing that started the scientific revolution. In particular, it seems to have been one of the points where people of the day recognized that they could not only match the feats of Rome, they could surpass them. The mindset that humans can make the world better than they found it is very important to me and hopefully will be to the kids as well. I think there is some level of irony to the idea that the people of the day were teaching themselves about things like math, physics, and perspective in an effort to create works that would better glorify God but the scientific revolution that resulted lessened the relative importance of religion in day-to-day life. I was also very interested to learn that Bruneschelli who designed the dome got his start (in part) as a clockmaker.

Another exhibit that I found moving was “The Deposition” by Michelangelo. It was one of his Pietas, carved when he was nearing the end of his life in his 70s, intending that it would be placed at his tomb. He became frustrated with a flaw in the marble and attempted to destroy it. (Although there is another theory that the imagery he used would identify him as identifying with a group of Christians who were out of favor with the Church.) The face of one of the figures in the sculpture is said to be a self-portrait of Michelangelo himself. 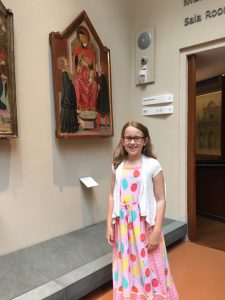 Tyrant of the Museum

During this trip, Harper earned the title, “Tyrant of the Museum.” She had very definite opinions on which room we should go to next. She wasn’t trying to hurry us from one room to the next — rather, she was trying to make sure that we worked through the museum methodically so she didn’t miss a room.

Later, in the early afternoon, we climbed the ~450 steps up to the dome. Everyone did fine. Amy was a little concerned that she’d get nervous with the heights, but it didn’t seem to be an issue. (Unlike the Astoria Column last year in Oregon which looked to be pretty nerve racking.) The views were, of course, spectacular. We celebrated the climb with some wine and sodas at yet another street side cafe. On the other side of the street, there was a busker playing an accordion. We had seen him in a number of locations over the two days we had been in Florence and loved his music. Harper took some coins to put in his cup. Buskers are fine, but there were also a number of beggars in the street who were not so fun to be around — they generally gave the impression of being grifters rather than simply people down on their luck.  Later in the afternoon, we made it into the Cathedral itself. We had seen parts of it as we climbed the dome but had not yet seen it from the ground. It’s impressive for sure, but it doesn’t take a lot of time. The line to get in can be fairly long, but generally it moves pretty fast. 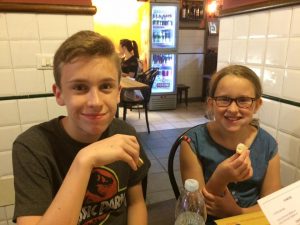 We wrapped the day up with dinner at Club del Gusto. One website said it was open at 6 p.m., but apparently they didn’t open for dinner until 7 p.m. (While we were waiting, Cole took the opportunity to pick up a Juventus soccer jersey from a nearby vendor.) On the way to the restaurant, we saw a line for a restaurant called  All’ Antico Vinaio which was significant enough that, when we got back, I felt the need to look up what the hell was going on. From the reviews, it looks like wine and killer sandwiches for not very much money. If we ever make our way back to Florence, we’ll have to check it out.

Still, our dinner at Club del Gusto was no disappointment. It’s a small operation — with what I took to be the owner and one assistant. The owner talked me out of a pasta with cow stomach (lampredotto). I knew what it was and intended to try it, but if the owner was suggesting something else, I figured I’d go with his suggested alternative. In retrospect, I wonder if he just assumed that as an American my delicate sensibilities wouldn’t deal well with cow stomach. Either way, I had a good dinner – some pasta with more like a Bolognese sauce. Amy and I split a half liter of red wine that was pretty good and, once again, reasonably priced! The kids had pasta with wild boar. If you’ve been following along, I’m sure you’ll be shocked to learn that we hit up yet another gelato shop on our way home. This was the view from our balcony at night:

Next: Back to Rome and on to Berlin