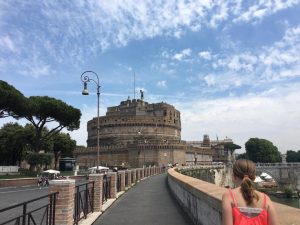 On the Road to Castel Sant’Angelo

We all slept in after our Colosseum tour. By the time we woke up and got moving, it was lunch time. We didn’t have any timetable that day, so it was all good. We ate lunch at a cafe (salmon pizza for me!) before heading out over to Castel Sant’Angelo which you could see from the terrace of our apartment. Before we entered, Harper browsed one of the ever-present merchandise stands to see if there was anything she wanted. She had received some surprise money from grandma before the trip and was wasting no time in finding something she liked. She got a jaunty sun hat that served her well throughout the rest of our trip — there being no lack of sun.

The castle started as a mausoleum for the Emperor Hadrian on the west bank of the Tiber but was turned into a fortress for the Popes. In particular, Pope Clement VII holed up there when the forces of Holy Roman Emperor (“neither Holy nor Roman nor Empire”) Charles V sacked Rome. Pope Paul III, in particular, seems to have spruced the place up “to ensure that in any future siege the pope had an appropriate place to stay.” Cole and I had fun noting the many places where “Paulus III” was inscribed (e.g. fireplace mantel pieces, doorways.) We also joked about the “minimalist” design. I will gently describe the decor as “busy.”

Near the top of the castle, there is a little bar with outdoor seating. Amy snagged us the best seats in the place — a table with a great view of St. Paul’s cathedral. At the top of the castle, there are some ridiculous views of the city and the Vatican. As we made our way back down and out of the site, there was a running fountain that I used to fill up a water bottle. (In a number of places in Rome, you’ll see running fountains. It’s my understanding that the water is generally potable.) From then on, I raved about the quality of the “castle water” which turned into a running joke about how I would never drink anything else — the kids came up with a plan where we could send them in (admission being free for the kids) to secure my castle water. The repeated flights to Rome might still get a little expensive. 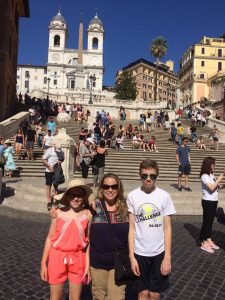 On the Spanish Steps

From there, we walked about a mile to the Spanish Steps. There are 135 steps that climb a steep hill, originally intended to link the Bourbon Spanish Embassy with the Trinita Dei Monti church at the top. The Steps are, of course, a popular tourist attraction where I heard many different languages being spoken. As I was listening to the many languages of people enjoying the Steps together, I had the not entirely original thought that the average citizens of the different countries often have more in common with each other than they do with the leaders of their respective countries. The conflicts, such as they are, have more to do with those leaders than they do with ordinary people. (As it happens, this was a theme in some World War I literature, suggesting that the German soldier and the British soldier would just as soon have a beer together as kill each other. It was the upper classes who had a beef with one another.)  The Spanish Steps’ impact on World Peace is debatable. What’s not debatable is that it’s valuable real estate where the nearby gelato stand feels comfortable charging an arm and a leg for subpar service. A block or two away and the prices go down and the quality of service goes up. Lesson learned! Cole declared that he was going to “sit the heck out of those steps.” And so we did. We found a nice step in the shade and did some people watching. The whole trip was full of fantastic people watching. 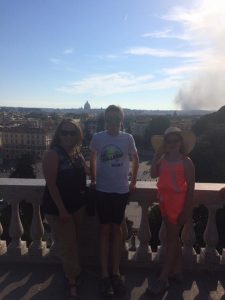 The smoke in the background by the Vatican is not a return of Charles the V sacking the city — apparently there was an auto junkyard that caught fire.

Seeing the Spanish Steps was the end of our planned itinerary for the day. I noted some nearby green space on the map which turned out to be the Villa Borghese Gardens, so we headed there. Rome is a place largely devoid of vegetation. The place is almost entirely stone of one kind or another. Cole kept having a sore back that I think was due to doing so much walking on such hard surfaces. So, the Villa Borghese Gardens which has some green space was a nice break from the stone. There was an overlook onto a divided highway that Cole and I found hypnotic, having something to do with the pattern of traffic climbing a hill with the ever present scooters and motorcycles weaving in and out of the larger cars. But that wasn’t the main attraction at the gardens. Rome being full of cool stuff situated among hills, there is never a shortage of spectacular views. The Gardens provided yet another one at the top of “the Pincio” which is the Pincian Hill, close to but not one of the original Seven Hills of ancient Rome. We didn’t explore the Gardens with any thoroughness because we were distracted by another shiny object.

Down below the Villa Borghese Gardens, from the overlook, we saw the Piazza de Popolo which is *huge*. The middle is dominated by the Flaminio Obelisk, an obelisk carved in Egypt sometime in the 1200 BC range during the reigns of Seti I and Ramses II. It was brought to Rome on the command of Augustus Caesar in 10 B.C. Torn down and broken into several pieces, it was re-erected in 1589 during a re-urbanization plan of Pope Sixtus V. (The overlap between modern Rome, papal Rome, and imperial Rome was always creeping up on me. Each of those stages is hugely significant on its own, but seeing them layered one on top of another represents a depth of history I’m not used to.) On opposite sides of the plaza are statues of Neptune and Dea Roma (which I originally took to be Minerva). We noted with some irony that Dea Roma’s fountain was more impressive than the God of the Sea’s fountain. 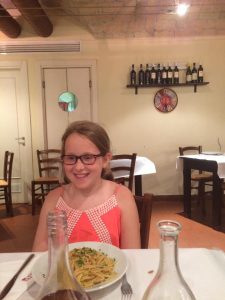 The face of a girl who is happy about her order.

We finished the day at a restaurant recommended by our friends called La Fraschetta Romanesca on the Trastavere side of the river.  The store front is relatively small with limited seating on the ground floor, but then you go downstairs and it really opens up. Harper was *very* excited by her meal when it came. The whole family enjoyed the meal. (I followed up my salmon pizza from the afternoon with salmon penne.) A half liter of wine was only $6 while a similar amount of water was served up for $5 — so you do the math on what to drink! Aside from seeing the amazing sites of Rome, this really was quality family time. Being in a new place with language barriers all around and none of the distractions of day-to-day life probably had us more focused on one another and gave us plenty to talk about.

In any case, the dinner at La Fraschetta Romanesca  ended another busy day in Rome. I think we did pretty well for ourselves without a formal itinerary.

Next: Day 4 – Travel to Florence and the Boboli Gardens