You are here: Home / Personal / Italy Trip Part II: The Vatican and the Colosseum

Day 2: Vatican City and the Colosseum 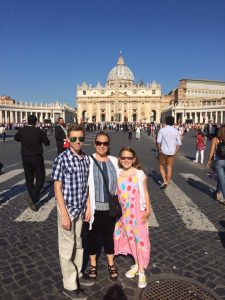 Vatican City was a short walk from our Apartment in Trastavere, and we had plans to go to the Vatican Museums. Getting the kids moving early in the morning with the time change and the day of travel before was a bit of a chore, but we persevered. Because we were going to what is, after all, a religious place, to show respect, we dressed in our Sunday best (even though we don’t happen to be religious ourselves.) In any event, bare shoulders and bare knees are verboten. (There is at least a bit of irony to this inasmuch as there are any number of depictions of naked people there.) 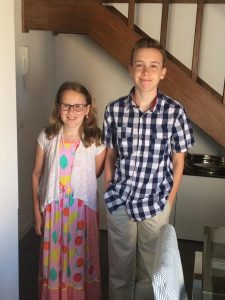 Ready to see the Pope

Amy had secured tickets for us online for entrance to the Vatican Museums. This was a great move because the lines to get into the place looked extensive. It was a self-guided tour where they gave you a little device where you would punch in the number of the exhibit, and it would give you information about the exhibit. Ultimately, we used the devices some but not very much.

It’s probably sacrilegious somehow, but we took a bit of a theme park approach: get the big ride first. So, despite all manner of interesting things on the way, we went fairly directly to the Sistine Chapel. It will come as no surprise to anyone that the place is amazing. No pictures are allowed. The guards are pretty constantly enforcing that rule and shooshing people to keep the noise levels down. The “get there early” approach worked. The Chapel was relatively uncrowded compared to how it would be later in the day. We grabbed some breakfast at the museum cafeteria and then went to explore the rest of the museum in a more leisurely way. There is a hall with maps of 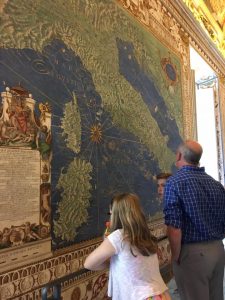 Enjoying a historical, wall sized map mural with my kids. As one does.

sections of Italy all along its length. I can’t stress how much I love maps. The family thought they lost me.

Amy and Harper really enjoyed the art collection in the Borgia Rooms. The place is just so big though. You could spend a long, long time enjoying all it has to offer. Eventually, however, the kids’ feet started hurting, so we called it a morning. (I want to stress that this was not a matter of the kids being unduly delicate — according to my iPhone, we would end up walking something like 12 miles that day.) Before we left, however, we picked out some postcards and send them to the grandparents postmarked from Vatican City. (They have a little post office in the museum.)

On the way back, we walked around St. Peter’s Square and then stopped into the little grocery near our apartment and braved the language barrier to acquire more meat, cheese, and wine. We had a snack and rested awhile before venturing out again later in the day for a night tour of the Colosseum. 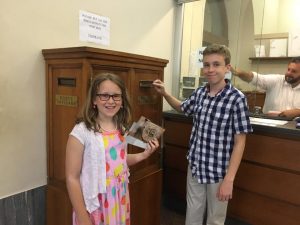 On our way to the tour, we very randomly ran across a fellow lawyer from Lafayette. He and his wife were meeting up with his son who lives in South Africa. Rome was kind of a mid-point for them. I had no idea he was there. We were walking down one street toward the Colosseum. He was walking up an intersecting street from a church they had just visited. I kind of squinted, thinking there was no way it was him. But, sure enough it was. I called out, “Hey Jeff!” causing him to do a double take of his own. Small world!

We had time to grab a quick pizza at a place near the start of our tour. It looked like it was going to be a bit of a tourist trap, but the pizza was unexpectedly good. Probably the best I had the entire time we were there — it was a sausage and mushroom. I regret that we only got one. Dining is usually a slower affair in Rome, and we were under a time crunch to get to our tour on time. They got it out to us quickly, and the family inhaled it. We could have handled a second one! 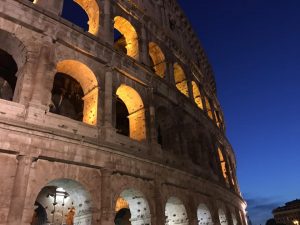 The Colosseum at dusk.

Our tour began at Trajan’s Column.  This is probably as good a time as any to mention that Italy has a lot of columns. If there were ever a column-based conflict between the U.S. and Italy, we would clearly lose. The U.S., in short, is on the wrong end of the Column Gap. The family had a lot of fun quoting the “Mike’s Marblopolis” SNL skit pretty much any time we saw a column. (“Ya GOTTA get yourself some . . . mawble cawlums!”)

At the beginning of the tour, we were all given headphones and a transmitter that allowed us to hear the guide without having to crowd her. The tour guide was, I believe, an archaeologist of some type. She definitely had strong opinions about the National Monument to Victor Emmanuel II. I don’t know if she actually used the phrase “white monstrosity,” but that was the general thrust of her comments. It’s a massive pile of “corpse white marble” that tore up a big chunk of Capitoline Hill and covers up a fair amount of the Roman Forum which could otherwise be unearthed. 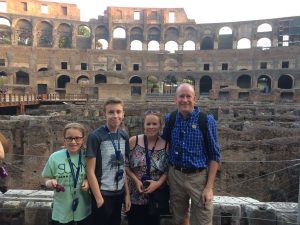 The tour took us past the Capitoline Museum which she recommended as having material of comparable importance to what you find in the Vatican without anywhere near the crowds. From there, we made our way to the Colosseum. It’s a massive and fascinating structure. I think it held about 80,000 people. They unearthed a great number of elevator shafts and our guide described how slaves used pulleys to haul animals, gladiators, props, and a number of other things up the elevators. This was about the only reference to slaves I happened to come across while we were in Rome — which is a little disappointing since so much of imperial Rome was made possible by the extensive use of slaves. Under the Colosseum, it was dark and there was a balancing act between light – which required use of some pretty foul torch fuel — and being able to breath. Also, there was a lot of wood used for the floor of the Colosseum, meaning there was a non-trivial chance of getting caught in a fire.

At one point, walking in the Colosseum on a warm night at the end of May, watching my children soak it all in had a pretty significant emotional impact on me. I was (and am) profoundly grateful that I had the opportunity to take them on this trip. I don’t know what they’ll ultimately retain, but watching them in that moment will always be something special for me. Shortly after that, there was a quote from Lord Byron on one of the displays that hit home:

I do remember me, that in my youth,
When I was wandering, — upon such a night
I stood within the Coliseum’s wall
Midst the chief relics of almighty Rome.
The trees which grew along the broken arches
Waved dark in the blue midnight, and the stars
Shone through the rents of ruin

Rome had been a city of a million people and, after the Empire collapsed, had a population reduced down to about 30,000. Cole and I had a good conversation about what that must have been like — living in a place where you are daily confronted with evidence of a previous civilization where there were a lot more people who could accomplish things far beyond your capabilities. There was also a period where, apparently, rival families warred for control of the Colosseum.

Our guide told us that, as with a number of monuments in Rome, the deterioration of the Colosseum abated when someone turned it into a Christian holy site. Without such protection, monuments and other sites had a way of disappearing. In the case of the Colosseum, such protection was secured when Pope Benedict XIV endorsed the view that the Colosseum was sacred because Christian martyrs had been persecuted there.  Per Wikipedia, “there is no historical evidence to support Benedict’s claim, nor is there even any evidence that anyone before the 16th century suggested this might be the case.” 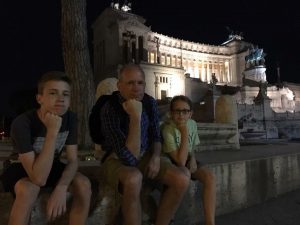 We Massons are thinkers.

After the tour, we walked back and grabbed some gelato on the way. The daily gelato stops became a happy routine for us. By the time we got home, we had walked something like 28,000 steps for the day. Amy and I finished the night with wine on the terrace. Then I crashed hard, sleeping until 10:30 in the morning the next day. I’m probably overthinking that night’s sleep, but it seems to me that after an extremely busy April and May, the effort required to square away work enough to go on vacation, the effort of getting packed for vacation, the flight, the early morning at the Vatican, and the thousands of steps the day before, my body was serious about getting some sleep.