You are here: Home / Personal / Italy Trip – Part I: Travel to Rome

It began, as all great tales do, as a love story. In this case, the love of incredibly cheap airfare! The kids are 11 and 13 which is a great age for traveling: old enough to be largely self-sufficient, but young enough to still enjoy our company. We knew generally that we wanted to take them to Europe so they would have at least a little context for the world outside of the the United States. Italy, along with Ireland, Spain, Germany, and England were potential destinations. Amy, being an inveterate planner, downloaded an app called “Hopper” which monitors airfare. We knew generally the dates we were interested in and the destinations, so she could keep track of bargains that might arise. During this period, we were hemming and hawing about where to go.

Then, one day, she sends me an e-mail. Hopper alerted her to an AirBerlin flight to Rome, round trip, for $411. The “downside”: we have to spend a night in Berlin on the way home. Oh no! Our decision was made. At those rates, we could spend less on our entire vacation than we spent on airfare alone during a vacation to Hawaii a couple of years ago. We decided to spend a few days in Rome and then spend a few days in Florence. I picked Florence based on a general notion that this was a central location in the beginning of the Enlightenment.

Day 1: Travel and the Trevi Fountain 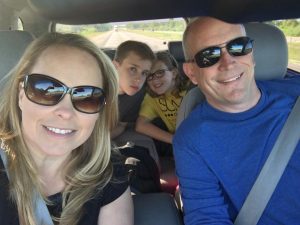 On the Road to O’Hare

The trip out was fairly smooth, but there were a few minor bumps. We parked at the WallyPark airport service at O’Hare. I believe there had been a change in the international departure gate recently, so the driver deposited us at the wrong gate. So, we had to take the airport train to get to the proper gate. Once there, AirBerlin shares space with another airline — Etihad out of the United Arab Emirates. Ultimately, a good number of AirBerlin travelers had to wait in what amounted to a relatively cramped aisle way until the Etihad flight was taken care of. These hiccups can be chalked up to us not being very experienced international travelers. The 8 ½ hour flight east was tough on our systems — sleep is tough to come by in those airplane seats and having the night abbreviated is disorienting. Cole, in particular, seemed frustrated by his inability to sleep. We were all probably a little cranky by the time we landed. AirBerlin really likes to feed you: dinner and breakfast plus a couple of snacks. New to me: complimentary wine on the flight! 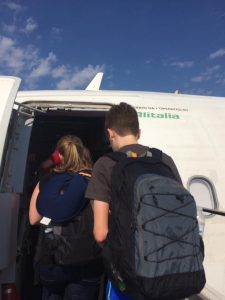 Boarding the plane from Berlin to Rome.

We landed at Tegel in Berlin and had a two hour layover. The airplanes exit from the front and back which makes the deboarding process much faster. You take stairs down from the plane to the tarmac with shuttles to the terminal. There was some issue with unloading the shuttles, so we were stuck there for longer than was comfortable. One fellow passenger joked that if the shuttle had had to go a few more meters, AirBerlin probably would have served us another meal.

At this point, it’s probably worth mentioning that our family knows very little Italian and even less German. So, it was helpful to us that knowledge of English in these countries is very widespread. I shared with the kids my deep amusement (because I’m a nerd with a peculiar sense of humor) at the phrase “English is the lingua franca.” Lingua franca is a Latin phrase for “french language” (technically language of the Franks, I suppose) used to denote a universal bridge language which, at this point in history, is English.  This led to a discussion about how Americans are generally very unlikely to know foreign languages when compared to the rest of the world. I cautioned not to draw the conclusion that this was because Americans were self-centered xenophobes. Rather, our country is very big, making international travel much more difficult and, furthermore, because English is the lingua franca, there’s not quite as much practical upside to us learning English as there is for people from other countries to learn English. That said, I would encourage anyone to get out of the country if they can because it expands your worldview and helps provide some context for evaluating our own country. 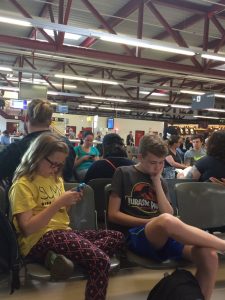 The Tegel Airport in Berlin was a lot smaller than I anticipated for an airport in a major capital city. This post explains that the airport was constructed in a hurry during the Berlin airlift. There is a larger airport under construction in Berlin, but our conversation with the hotel manager where we stayed (more on that later) suggests that the project is a major boondoggle with a completion date that keeps getting pushed back. While we were in Tegel, I noted (for no particular reason) a few young Americans who struck me as being “of a type.” There was a couple who I (perhaps unfairly) characterized as crunchy hippie types speaking with a guy who was more of a guitar bro. He was playing them a few songs and they were nodding along at the profundity. I’m having a little fun with these descriptions, but I don’t want to get too carried away rolling my eyes at “kids these days.” If what they’re doing brings them joy, that’s sufficient reason for doing them.

After a short layover, we boarded the Alitalia plane from Berlin to Rome. When we arrived in Rome, the driver for the car that had been arranged by the apartment rental place was at a different gate. So, there was a bit of waiting and exchange of phone calls involved in securing our ride. The traffic in Rome is chaotic. Lights and lanes seem to be more guidelines than rules. Smart cars, pedestrians, and scooters weave in and out of each other, mostly avoiding contact. But, we made it to the apartment we rented in Trastavere on Via Degli Orti d’Alibert, maybe half a block from the Tiber River. (It was a little longer to walk to the Tiber because there wasn’t a straight path from the place we were staying.) The apartment we rented was on the fourth and fifth floors of the building and had a pretty outstanding terrace on the roof. The kids did a good job of hauling their own luggage up the four flights of stairs. 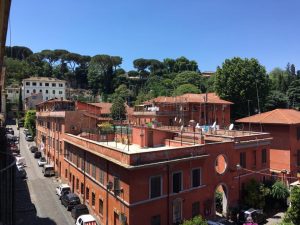 Lookin’ out my back door. (View from our apartment).

There was a little shop a couple doors down from our building, so we went in. There was an old Italian grocer, straight out of central casting who didn’t speak a lick of English. So, it was a good first challenge for the road weary travelers. At first we couldn’t tell if he was telling us whether he was opened or closed. But, when I recognized that he was telling us that he closed at 4:30, that seemed to bridge enough of the communication gap for us to get things going.  Part of the problem was that he wouldn’t let us just go grab likely products and bring them to the register. He wanted to get them for us. But, ultimately, we secured some wine, beer, meat, cheese, and bread and brought them back to the apartment. Then, it was nap time! We hadn’t slept much in the last 24 hours and everyone was feeling it. I’m not sure how much everyone else slept, but I got a few hours of much needed sleep, and we were ready to go see a little bit of Rome. 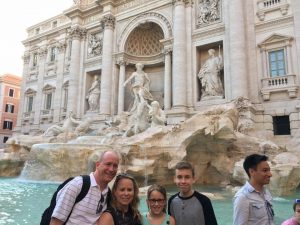 The Massons at Trevi

We decided to make the approximately 1.5 mile walk to the Trevi Fountain. Unfortunately, the Apple Maps app pretty quickly directed us to go straight through a wall. We were in a strange city and still getting used to navigating the narrow cobblestone streets where the had to crowd near a building wall when a car was coming past. We would quickly get used to this, and navigating the city wasn’t terribly difficult, but it did take some getting used to. We had read a lot about the prevalence of pick pocketing in Italy. We didn’t experience any ourselves, but we were on guard against it, so that added to the initial tension.

Near the fountain (and really near any tourist attraction) there were lots of street vendors selling a random variety of things such as wooden bowls, fidget spinners, and selfie sticks. (But, despite the apparent randomness, the sales seemed to be the same 6 or 7 items throughout Rome and Florence.) The Fountain, like so much in Rome, really was spectacular. Wikipedia tells me that “Trevi” refers to three roads, and the fountain is the terminal point where an aqueduct brought water into Rome and served the city for 400 years. In 1629, Pope Urban VII came up with the idea of a sculpture that would make the site more dramatic which, after a long time, led to the project which was completed in 1762. We didn’t know all that at the time — we just appreciated the beauty of the place, being in the midst of the other site seers, and threw in our coins.

Our first dinner in Rome was at the Piccolo Buco, not far from the Trevi Fountain. There was a fairly significant wait to get in, but they handed out some free glasses of wine while we waited, so that was fun. We had no idea, but this appears to be somewhat common — something similar happened while we waited for a restaurant in Florence a few days later. Common or not, it made us feel special! The kids, who got nothing out of that deal, perhaps weren’t quite as content with the wait. But, ultimately the food was good. Harper was angling for some cheesecake that she didn’t get that night. However, her raising the subject prompted me to tell her the story of my oldest sister having a nightmare about cheesecake once when we were kids — as I recall, it featured little men (I always pictured them as being like Oompa Loompas) holding out plates and chanting “cheesecake, cheesecake.”. My other sister & I never let her forget it. Harper and Cole cracked up when I told them about it. After a nice dinner, we made our way back to the apartment. We were quickly becoming more comfortable walking around in the city.

Next time: The kids wear their Sunday best for the Pope.