You are here: Home / General / Vacation Over

My lack of posting the past 10 days or so has been due to our family Spring Break vacation. This year we went down to Cocoa Beach for a couple of days then got on Royal Caribbean’s Enchantment of the Seas for a four day cruise from Port Canaveral to Nassau and back. At Nassau we went to the Atlantis resort. On the way, we were supposed to stop off at Royal Caribbean’s island, Cocoa Cay, but the winds were too heavy to permit a tender from the ship to the island and back. We got back to port on Friday and surprised the kids with a trip to EPCOT.

Some thoughts in no particular order:

-Driving through the night is still my favorite way to travel long distances. My family mostly gets to sleep through the experience, we avoid almost all of the traffic, and I can indulge my obsessive compulsive driving habits which cause me to bristle at any delay for trivialities like food and boredom. This time, I started driving at about 4 pm and turned the wheel over to my wife at about 6 am (we stopped in Indy for dinner). I’m getting soft in my old age. Normally I would have held out for dawn and/or the Florida border, but I decided there was no need to be a hero. Podcasts have really revolutionized the driving process for me. I used to find an AM station with moderately interesting programming (Art Bell’s Coast to Coast AM used to be a favorite) and then suffer through an endless series of news updates and Gold Bond advertisements. We arrived in Cocoa Beach at about noon. On the way back, we drove through the day — got on the road at about 8:30 a.m. and arrived home at 1:30 a.m. this morning. Despite it being a Saturday, we had to slog through Atlanta traffic. I’ve never been brave enough to tack on the additional mileage necessary to get from Indiana to Florida without suffering through Atlanta.

-I hate the Orlando area with a white hot passion. It’s a toxic stew of strip malls,  aggressive Christian signage, and an inscrutable patchwork of toll roads. First of all, I’m not a fan of the Disney properties or Orlando theme parks generally. This is a minor disgruntlement. Somehow I keep ending up there. Three years ago, we went to Disney because the kids were of an age where the pilgrimage seemed required. Then two years ago we went to Universal because we are Harry Potter junkies and they have Harry Potter themed stuff. Last year, we took a cruise excursion to Sea World when we docked at Port Canaveral (leaving out of Baltimore). This year, we couldn’t see leaving the warm Florida area a day early for the eternal Indiana winter. So we decided to leave a lot of extra cash with the Disney people instead. The experience is pleasant, but nowhere near worth the price. Kings Island and Cedar Point have much better rides. Aside from the theme parks, the driving is obnoxious. The development in the area seems like it was poorly planned or not planned at all, leading to an endless array of stoplights and strip malls. The toll roads, as I said, are inscrutable. The spacing of toll booths or the toll charged certainly does not seem to have anything but a nodding relationship to distance traveled. I assume there is a patchwork of competing jurisdictions, each delaying your travel and pawing at your pocketbook. If we’re letting Floridians travel our roads for free, perhaps we could charge them a hurricane relief fee to balance the scales? And, just as a cherry on top, I saw a fair amount of signage proclaiming my condemnation to hell, denouncing the baby murderers, and proclaiming that, if I’m honest, I know that God is real. Just the Christians though. I did not see any aggressive quotation of Koran or Torah passages.

-To the guy at EPCOT who couldn’t get a table for his family next to his brother at the German buffet, nicely done edging right up to Godwin’s Law without technically going over the edge. But, yelling at the server about anti-semitism as the reason for the seating snafu made you look ridiculous. Moreover, I can’t quite grasp the level of narcissism that leads you to conclude that your unhappiness with seating arrangements makes it appropriate to curse a blue streak in front of my family and dozens of others. Also, too, when tables full of strangers are jeering at you to sit down, it’s time to STFU.

-The Atlantis resort at Nassau is awfully cool. We went there for a day, but 2 or 3 days would have been better. There is just a lot to do there. The water slides are outstanding. The “Leap of Faith,” with its approximately 60 foot near vertical drop, is probably the big ticket slide, but some of the others – The Challenger, The Abyss, and the Surge – were very entertaining as well.

. The place is just big and beautiful. In addition to slides and pools, “The Dig” is an impressive underground aquarium. We didn’t even make it to the beach that day.

-Cruises are a good place for kids to expand their palate. My kids continue to impress me with their sense of adventure when it comes to trying new food. They simply disdain the kids’ menu these days. In “real life” some of the fancy dining options would cost a fair amount of money to try, which is problematic if they hit something they just don’t care for. But on a cruise, with the meals prepaid, the dynamic is a little different. They can branch out with not a lot of risk if something doesn’t pan out. This particular cruise also had a rock climbing wall that the kids enjoyed quite  bit. And so did I! I’ve never done rock climbing walls before, but it was fun – and, I’m happy to say, I successfully reached the top on my first try. I can’t imagine doing that for real in a setting where the hand and foot holds aren’t bolted in.

-The International Palms Resort in Cocoa Beach is not very resort like. We stopped there for a couple of days on the beach and got a room with a cool little divided off area with bunk beds for the kids. The lobby and public areas were nice enough, but the rooms were just trashy. Exactly like the kind of thing we would pile into on Spring Break in college. It wasn’t a big problem for us or anything but if you’re looking for posh or “moderately clean” or “mirrors that aren’t horribly scratched up” then this place isn’t for you.

And, for those of you who have read this far, here is a picture of me and the kids enjoying the beach. 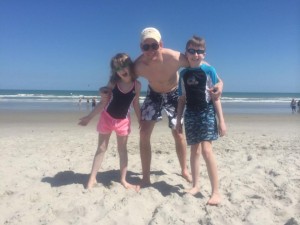