In a comment to my previous post, a commenter (who I’m happy to credit but won’t single out by name since he didn’t ask to become part of a main post) said:

I have little doubt that most states will end up legalizing abortion during the first trimester (during which 90-93% of abortions take place) and banning it after that, with the three exceptions included [rape, incest, health of the mother]. That’s where the vast majority of Americans are. That is also the approach most industrialized nations have taken.

I do not think that’s the approach Indiana will take. The introduced version of SB 1 certainly does not take a permissive attitude toward terminating pregnancies in the first trimester. And the testimony I’ve heard from the pro-life crowd indicates that they want it to be even more restrictive and punitive. Before passing it out of committee, I have read that the committee made amendments that made the bill more punitive. (More on that below at the update) (I’m not seeing the text of the amendment on the LSA website yet.) 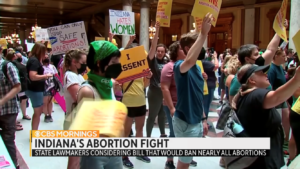 Peaceably assembling and petitioning the Government for a redress of grievances

My wife and son went to the protest during the first day of the General Assembly’s special session. I am proud of them.They went because they believe, among other things, that abortion is healthcare and that government should not be mandating reproductive decisions for women.

Governor Holcomb called for a special session, ostensibly to issue refunds from the tax money that Indiana has accumulated. But that was a fig leaf. He knew the Supreme Court decision eliminating the Constitutional right to privacy was coming down the pike and that the members of the General Assembly would be eager to impose regulations on reproductive health. It would not have been politically difficult to take up such legislation in the normal course of business. Certainly it would have been less costly.

I shouldn’t dwell too much on the timing, however. Candidly, I would not have been any happier if this legislation was pushed through in January. Like I’ve said before, I personally don’t think that a fertilized egg is the moral equivalent of a baby. And I think many people in the pro-life camp, on some level, also don’t think a fertilized egg is the moral equivalent of a baby. If there was a business slaughtering babies down the street, nine to five, Monday through Friday, for the past 50 years; I’d like to think none of us would be content with writing sternly worded letters to the editor or patiently waiting for decades to elect enough anti-baby-slaughter candidates to close the business down. I think that the pro-life side’s willingness to, by and large, observe the legal niceties while debating the issue reflected that they also recognized a difference. That’s also why most people are willing to countenance abortions in the case of rape or incest. (However, note, there are plenty of people who are – at least rhetorically willing to say that a fertilized egg is exactly the same as a baby and endorse legislation that criminalizes abortions even in cases of rape, incest, and impaired health of the woman.)

So, if there’s a moral difference between a fertilized egg and a baby, we have some line drawing problems. What’s the difference, when does it take place, who should be involved in making that determination, and what should the legal consequences be? The rhetoric surrounding this issue does not lend itself to thoughtful consideration of these questions. And it often confuses more than it illuminates. A woman who decides not to continue a pregnancy that’s barely more than a fertilized egg is not a “baby murderer.” What makes the discussion even more challenging, for a lot of people the fetus and the pregnancy are more or less stand-ins for other cultural issues. Even if we could come to some kind of agreement about the moral value of the fetus relative to the moral value of the health and well-being of the mother, we might not even be addressing the central, but unstated, issues dividing us.

Many of those who characterize themselves as “pro-life,” don’t seem to be notably encouraging toward life in any other contexts. When you hear rhetoric about “consequence free sex” coupled with a reluctance to make birth control widely available or ensure adolescents get sound sex education, it suggests that sex is the real issue — particularly women having the freedom to have sex out of wedlock and without becoming mothers or at least enduring pregnancy. Where concerns over unsanctioned sex is the real issue, you’ll see calls for very invasive and thorough documentation of rape, incest, and/or health risks. Otherwise these promiscuous ladies might cheat the consequences of their bad behavior. If they aren’t subjected to pregnancy itself, they should at least be subjected to something negative, the reasoning goes. Otherwise, presumably, women of such low moral character might be tempted to lie.

There are other groups (overlapping the moral scolds), for whom the liberty and equality of women is a real downer. We’ll call these folks the patriarchs. Seen at the State House on Monday were some masked dudes flying a Russian flag with the face of Jesus emblazoned on it. The “alt-right” is a toxic stew that features, among other things, pro-Russia, Putin loving, Trump conspiracy embracing, mostly white dudes who oppose reproductive rights. It’s all a toxic stew that seems to revolve in large part around hating women. The “manosphere” is a melange of incels, “pick up artists,” mens rights activists, “men going their own way,” and “father’s rights activists,” who – for all of their purported concern for men, spend a lot of time focused on the failings of women. It overlaps with alt-right and white supremacist groups and generally stands for the proposition that modern society has been corrupted by feminism. The ability of women to control their own sexuality and reproduction is a source of a great deal of consternation in these circles. What if they choose poorly? What if they corrupt the blood? What if a man wants to have sex with them and they don’t want that?

It’s these overlapping and often unstated interests that result in criticism that goes beyond Roe.  You also see opposition to Obergefell (2015 – same sex marriages) and Griswold (1965 – birth control), sometimes even Loving (1967 – interracial marriage) and Lawrence (2003 – sodomy laws).  All of this is to say that, if unsanctioned sex or proper gender roles are the real issue, discussions about fetal development are going to be unhelpful because “life” isn’t the actual, or at least not the sole, complaint. Striking an appropriate balance between the life of the developing fetus on the one hand and the health and well-being of the woman on the other hand isn’t going to be acceptable in those circles if it does not limit and punish out-of-wedlock sex and reinforce traditional gender roles.

I expect the Republicans that dominate the legislature will, by and large, cave to the interests that want unflinching criminal penalties for abortion, regardless of context. Legislators won’t be rewarded by anybody for taking a nuanced approach to the moral value of a developing fetus when the real argument is over who should be having sex with whom and under what circumstances or over how relationships between genders ought to be structured and reinforced through government policy. If we get legislation that permits abortion freely during the first trimester, I will be shocked.

Update 7/28/2022 – LSA has posted the Senate Rules Committee report (as well as a minority committee report which did not pass.)  The majority report amended the bill to add a line to the definition of “abortion” which says that, even though termination of a pregnancy isn’t an “abortion” where the fetus suffers from a medical condition that is incompatible with life outside the womb, such a termination still has to be reported under IC 16-34-2-5. (I’ll go ahead and quibble with that drafting choice. You shouldn’t be requiring or prohibiting actions within a definition section.)  The report also amended the bill to limit the provisions allowing abortion in cases of rape or incest. If a girl or woman is more than 15 years old and more than 8 weeks pass from the egg being fertilized through rape or incest, she has to carry the fetus to term. If a girl is 15 years old or less and more than 12 weeks pass from the egg being fertilized by the child being raped, the child will be required by the State of Indiana to carry the fetus to term. Additionally, it increases the penalty for all unlawful abortions to be a Level 5 felony. As I read the original draft, partial birth abortions and abortions by dismemberment were already a felony and would remain that way. I don’t think the original bill draft actually had a penalty for performing other kinds of abortions unlawfully.

The minority report, which the Republicans on the committee voted against, would have amended the bill to allow abortions where a physician determined that abortion is necessary to prevent a substantial permanent impairment of the woman’s physical health. It would have limited abortions performed after viability or 20 weeks to just those necessary to prevent a substantial permanent impairment of the life or physical health of the pregnant woman. It added language to the state’s religious freedom act, stating that, if a person’s system of religious belief holds that human life doesn’t begin until a particular stage of fetal development, then a statute prohibiting abortion before that stage constitutes a substantial burden on the exercise of religion and can’t be used to prohibit the person from getting an abortion.