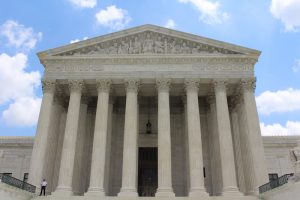 Tenet III – One’s body is inviolable, subject to one’s own will alone.
Tenet V – Beliefs should conform to one’s best scientific understanding of the world. One should take care never to distort scientific facts to fit one’s beliefs.

I used to regard the Satanic Temple as sort of the merry pranksters of religious rights activism. They have produced things like the Satanic Children’s Big Book of Activities and a giant statute of kids looking up to a seated Baphomet which they offer to state capitols that seek donations of religious statues. But reading their complaint and the attachment, what they’re doing seems a little less frivolous. With respect to Satan, they say, the Satanic Temple “venerates, but does not worship, the allegorical Satan described in the epic poem Paradise Lost – the defender of personal sovereignty against the dictates of religious authority.” They also cite their Tenets III and V in support what they describe as their “ritual of abortion.” Tenet III says, “One’s body is inviolable, subject to one’s own will alone.” Tenet V says, “Beliefs should conform to one’s best scientific understanding of the world. One should take care never to distort scientific facts to fit one’s beliefs.”

With respect to the “Satanic Abortion Ritual,” the attachment to their complaint says:

The Satanic Abortion Ritual is a destruction ritual that serves as a protective rite. Its purpose is to cast off notions of guilt, shame, and mental discomfort that a patient may be experiencing due to choosing to have a medically safe and legal abortion.

This ritual is intended to alleviate some of these stressors and empower the patient to be guided by the Third and Fifth Tenets when pursuing their decision. The purpose of the ritual is not to persuade someone to have an abortion if they are undecided. Instead, the ritual serves to assist in confirming their decision and to ward off the effects of unjust persecution, which can cause one to stray from the paths of scientific reasoning and free will that TST members strive to embody.

The ritual itself is described as consisting of looking at one’s reflection to remind the person of their personhood, reciting the third tenet prior to the abortion and reciting the fifth tenets.

The lawsuit is brought on behalf of unnamed “Involuntarily Pregnant Women” who seek to remain anonymous for fear of violent retribution from domestic terrorists motivated by animosity to proponents of abortion. The complaint describes zygotes, blastocysts, embryos, and fetuses, and clarifies that Indiana law deviates from the medical literature by describing all of these as “fetuses.” It then challenges the law as an unconstitutional taking of the Involuntarily Pregnant Women’s property rights in their uteruses without just compensation.

Citing the commercial value of gestational surrogacy, it challenges Indiana’s abortion ban as involuntary servitude in violation of the Thirteenth Amendment.

73. All women have the fundamental right to use contraception and engage in sex just for the pleasure and intimacy it brings and without any purpose or intent to become pregnant (“Protected Sex”).

74. The Involuntarily Pregnant Women engaged in Protected Sex but became pregnant without their consent due to the failure of their Birth Control.

75. The Indiana Abortion Ban imposes criminal penalties on anyone who provides an abortion to an Involuntarily Pregnant Woman.

Finally, the complaint argues that the state’s abortion ban violates Indiana’s Religious Freedom Restoration Act. (IC 34-13-9). (Unfortunately, later on – in paragraph 96 – they cite something other than the Indiana Code, section 73-401 et seq. A quick Google search suggests that this is a reference to Idaho’s RFRA.) Indiana’s RFRA is worded very broadly. Religious exercise is defined as “any exercise of religion, whether or not compelled by, or central to, a system of religious belief.” I don’t see that the chapter actually gets around to defining “religion.” I have not done a deep dive, but I don’t think Indiana courts have grappled directly with this question. And, I think federal courts have grappled with it to a degree, but mainly focused on whether the religious belief was “sincerely held.” When you get into it, today’s “religions” are yesterday’s “cults.” And courts have not thought it their place to police whether any particular person is correct about how they are practicing a religion. So, even if the thinkers and the leaders say that Religion X dictates one thing, they aren’t going to dismiss a practitioner who sincerely believes that Religion X dictates a different thing. And even if you can argue that the Satanic Temple started as something of a joke, the longer it sticks around the greater chance that some of the people who support it will be utterly sincere in embracing its tenets.

I’m not optimistic that they’ll win this lawsuit, but it throws a bit more sand in the gears of the Indiana General Assembly’s efforts to take away the reproductive rights of Hoosier women and girls.

Update: People a lot more knowledgeable than me pointed toward an interesting law review article that’s relevant: “Forced Labor, Revisited: The Thirteenth Amendment and Abortion.” (One of the people observed that, “enslaved women were *literally* the means of production of valuable assets, and part of the legislative history of the 13th Amendment is that it covers their forced pregnancies as forced servitude.”) And, look, I get it – the argument that pregnancy is slavery is jarring. But, as the author notes, that’s largely because we view pregnancy through the lens of women who want to be mothers. I doubt the argument that state compelled pregnancy amounts to involuntary servitude will carry the day, but it’s worth reading (if even only to reject it afterward) rather than simply rejecting the argument out of hand.

The author dismisses the argument that women assume the risk of pregnancy by engaging in sex by making the analogy to a worker who is subjected to compulsory service under the guise of a contract. “A contract for service (already a pretty strange characterization of her “consent”) is consistent with the Thirteenth Amendment only if the contractor ‘can elect at any time to break it, and no law or force compels performance or a continuance of the service.'” I was happy to see the author engaged with the critique that family obligations were not the same as economic obligations. He replied, in part, “Child support obligations do not raise Thirteenth Amendment concerns because they do not require specific bodily labor from anyone; one can raise the money any way one likes, just like any other contractual obligation.”

For my part, I see this argument lost in the same morass that makes the rest of the abortion debate challenging: when and why is human life entitled to greater moral consideration than other kinds of life? People can and have written books wrestling with these questions. I’m not even going to scratch the surface with a blog post. The closer the zygote, blastocyst, embryo, or fetus is to a self-sufficient child, the more likely it is that have some moral duty at least not to go out of our way to let it die. This is obviously in conflict with the compelling rights of the individual mother. Whatever you think of the textual grounding of Roe, its practical balancing of these interests on the trimester model was fairly sound.