This weekend, I had my 25 year high school class reunion. As we were taking a tour of the high school, one of my friends mentioned that it didn’t even feel like he went to school in that building. It was at such a remove, that it felt more like someone he knew went there and kind of told him about it. It struck me that one of the things I like about the reunion is not just seeing old classmates. In a way, it’s a little like getting to visit yourself as a kid. Partly it’s fun to see the people you used to know and catch up with them. But, partly it’s fun to see people from your childhood because they remember you when you were young, and they trigger your own memories of yourself at that age.

And if we are revisiting our younger selves, one of the conversations we seemed to be having was about how all that social anxiety was misplaced. That seemed to come up a lot. It was a very “Breakfast Club” kind of reunion for me I guess – the nerds, the jocks, the burnouts, the loners, and the beautiful people – we all had our issues. Everyone was trying to figure it out. People who seemed to have it all put together didn’t. Your own failings, which loomed so large in your own head, by and large were often times simply ignored by your peers as they were worrying desperately about their own self-perceived failings. And, on top of that, a number of us ditched the tour and started wandering around the empty high school unattended.

Time and age are perhaps taking their toll on our bodies. (Although, if anyone in high school was banking on the idea that the beautiful people they were jealous of would get old, fat, and ugly any time now; I regret to inform you that a lot of the beautiful people are still beautiful and, what’s more, seem to be healthy, happy, and just generally delightful individuals.) But time and age also seem to have a mellowing effect where I noticed that most of my old classmates are comfortable in their own skins and have mostly learned to embrace themselves unapologetically. Among other things, this made the conversations more interesting. There was the usual “what do you do, where do you live, how many kids, move on to the next person” conversations. That’s pretty much inevitable when you have that many people getting together for the first time in five years. However, I also had a fair number of talks that gave me some insight into people who had a part in shaping who I became as a young kid but who I maybe never knew that well. The kind of talks that deepened (or in some cases) created the respect I have for who they have become. For whatever reason, I wasn’t having these kinds of interactions with these people at the past reunions. And there were more than a couple of classmates I barely knew at all that I wish I had gotten to known much better. I was struck by a sense of missed opportunity.

I was intrigued when the conversations turned to the anxieties and social awkwardness that everyone seemed to struggle through. And, ultimately, finding out how needless and almost entirely self-inflicted most of those struggles turned out to be. I’d like to be able to save my kids those struggles by simply talking to them about how I found out that I didn’t really need to be half as worried as I recall being in high school. Maybe talking to them about it is worth a shot. But, I suspect the anxiety of one’s teen years is simply something that has to be lived through.

There was also a level of kindness at the reunion that really impressed me. From all around. From my good friends, of course. But also from people I saw as antagonists at the time, from people I wanted to know but was too shy to approach, and from people who I simply missed in the crowd. In some sense, it felt like we were veterans of the same war, had gone into the tunnel together, and made it out the other side.

Not that the whole weekend was treacly sentiment and deep introspective conversations. There was also a fair bit of hanging with my buddies, drinking too much, eating greasy food, and generally having a blast. 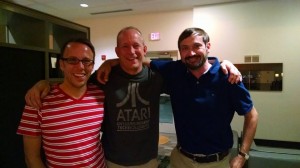 See! That picture was at 3 or 4 a.m. in the Holiday Inn lobby, and we couldn’t be happier. All-in-all, a great experience.