My grandmother died this morning. We’ll all miss her, of course, but it’s o.k. She was ready to go. Her name was Erma Guipe, but pretty much the whole world knew her as Gran. I believe she was 92 years old, and I know she was still sharp as a tack; however, her body was failing her. In some ways, her end was the exact opposite of my Uncle Fritz who we lost a little more than two months ago. He was a failing mind inside a healthy body; whereas Gran was a healthy mind inside a failing body. Growing old, as they say, is not for the faint of heart.

I was five or six when I 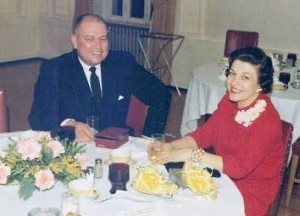 met her. She was my step-dad’s mother, and that was about the time our families merged. She always seemed tickled to recall that, when we first met, I greeted her by running up to her and giving her a hug. Kids all loved her. Everybody loved her. I don’t know that I ever heard a person speak a negative word; and if you didn’t like her, I suppose it would say more about you than about her. She wasn’t overbearingly nice or a pushover or anything. In fact she could be stern and tough as nails when the situation demanded it. The best I can describe her is that she was quick to understand a person and slow to judge.

I don’t know a great deal about her life before I ran into that front room of her house in Goshen, and gave her a hug; but my understanding is that she was about 20 or 21 when she and her husband, Hank, had my Dad. My Uncle Jack came not long after. Hank was off fighting World War II for a good bit of the early years for my Dad and Uncle Jack. Sometime over the next 10 years came three more uncles: Jim, Rick, and Tom. You can see where she developed some toughness; raising youngsters while her husband was away at war and having to corral five boys — who were, by all accounts, rambunctious sorts. Sometime in the late 60s, Hank died. Gran was a widow for about 45 years. But, she was by no means alone. At least two of her sons and, at times, three have lived in Goshen with many of the grandchildren living within several blocks of her. During the 70s and 80s, she ran a sort of a daycare. (We just called it babysitting.) I know many of those kids have kept in touch and also knew her as Gran. She never did learn how to drive. I always figured at least some part of her longevity came from the amount of walking she did. I know that, for some time, there was a Burger’s Dairy store a few blocks from her house, and she would frequently walk there and back for groceries. Of course, having sons and grandchildren nearby also facilitated this.

So, that first meeting wasn’t all hugs and happiness though. I mentioned the rambunctious uncles. The Guipe men kind of tend toward the big, gruff, and (if you don’t know them) intimidating — particularly to a sensitive, easily scared five or six year old such as myself. Gran was an island of comfort in the middle of this for me. That first visit featured one of the uncles tying my shoes together, much to my sadness and consternation. Gran kept me coming back. Along with her cooking. Year after year, she headed up Thanksgivings and Christmases, cooking for the masses. The five sons all had wives and children — if my count is right, Gran plus her sons, their wives, and their children amounts to 28 people. That’s before you get to the great grandchildren who I probably couldn’t count if I tried. But Gran could. Every year (in later years with some assistance) she has faithfully sent birthday cards to my kids. And all of the grand kids and great grand kids have had stockings that hang up at her house on Christmases. As to the food, it was all good, but I will be eternally in her debt for introducing me to ham loaf. That was on the menu with a mustard sauce every Christmas. My kids get vaguely disappointed when we’ve gone there for Thanksgiving because ham loaf isn’t on the Thanksgiving menu.

As I said, she was quick to understand a person but slow to judge. With that vast a family, she’d been through a lot. And our family members run the spectrum in terms of occupational success, run ins with the law, marital status, and just about anything else you can think of. I always got the sense that she took the measure of a person quickly and accurately. But, even so, I think she loved all of them for who they were. One year, during finals in law school, I grew a beard. It was a mangy mess of a thing, and I didn’t have any illusions about how it looked on me. After finals, I didn’t quite feel like shaving it off and was still sporting that look when I showed up at Christmas. Whereas pretty much everyone else in the family had given me varying levels of good natured crap about how I looked, Gran was rather cheerful and enthusiastic about it. I don’t think she actually thought it looked good; but she could see I was enjoying it, it wasn’t hurting anything, and so she was encouraging. (Side note: I still had the mange on my face when I met Amy a few weeks later. When I saw Amy a second time a few weeks after that, I had shaven. I figured it was the startling contrast that duped Amy into thinking I looked good; so, maybe I can thank Gran for helping me to land my wife! Amy bonded with her at my law school graduation. That they enjoyed each other’s company did not hurt my impression of Amy as a long term prospect.)

I don’t have any reason to think Gran treated me or thought of me any differently than her other grand kids. But I got the sense that she saw the good in me and was very proud of what she saw; and, at the same time, she probably recognized my negative qualities but they didn’t bother her. She’d undoubtedly seen worse. Such a person is easy to love; and that’s probably why we all did. We’ll miss you, Gran. But I’m glad you’re finally at peace.