Home » Posting from my subterranean bunker

Subterranean bunker sounded cooler than “basement storage room” which has become my new office. I don’t know that I have anything profound to offer that won’t be trite in the face of the magnitude of what we’re facing or redundant in the face of the fire hose of online content that comes at us all every day, but I felt like writing, so here you go. 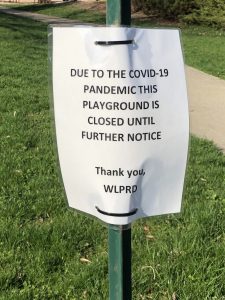 We’re in day 14 of the Governor’s “stay-at-home” order. He just extended it for another two weeks through April 20, 2020. I don’t particularly think that it will be lifted at that point. According to the current Institute for Health and Metrics projections for Indiana, our peak medical resource use is projected to be in 10 days, on April 17. They’re estimating that we can expect something like 97 deaths and need something like 4,441 beds and 865 ICU beds that day. (The good news is that they say we have 8,485 beds and 706 beds available.) They also say we’ll need something like 735 ventilators. I have no idea what our capacity is on that score. The latest stats released by the Indiana State Department of Health for April 6 show 5,507 positive; 28,764 tested; 173 deaths (as compared to the day before, that’s +563 positive; +2,573 tested; and +34 deaths).

While legal services are categorized as “essential,” my office is mostly shut down. I’m working from my basement, and my law partner is coming into the office but the doors are locked to the public. Our legal assistants come in to the office about a half day per week at staggered times and do what they can from home. The rest of the time, we’re basically paying them to stay home. Theoretically, paid to stay home sounds nice, but they clearly want to work. We have a good group of people at my office, but I don’t think this is uncommon. Despite the right-wing common wisdom, most people aren’t bums looking for a handout. A stronger social safety net isn’t going to turn us into a nation of mooches. There are presumably some jobs folks won’t do voluntarily unless destitution is the alternative, but the fact is that most people want to work and do something productive with their time. I had been pretty successful in not going anywhere for roughly 10 days. But on Sunday, I had to do some things in the office (when no one else was there) and on Monday, I had to go to a County Commissioners’ meeting. We’re getting better at the technology, but with the need to have several people involved with the meeting and the need to make the meeting accessible to the public in real-time, we haven’t quite figured out how to eliminate the in-person component entirely and there were several items on the agenda where I was the best person to do the talking. It was a big room with 10 people, and we all kept our distance pretty well. Then, I needed to go to our firm’s off-site file storage units to do a deep dive looking for some documents that are 20+ years old (and not available digitally). That’s a pretty large space that no one goes very often, so again I felt reasonably safe, but there’s a keypad to enter the larger facility, so that’s a potential vector.

As far as the family goes, we’re better situated than most for this particular storm. The kids have their own rooms, and we have a basement. My wife is a web designer, so her computer cast offs are pretty good technology for e-learning. Having space and a solid home network are luxuries not everyone had. Still, it’s worth taking a moment — as my wife did a few days ago — to recognize that our kids (privileged as they may be) have been pretty remarkable in terms of how uncomplaining they have been through this process. As Amy put it:

Can I just talk about my kids here for a minute? These kids are 14 & 16 years old. They are in high school. Their school year has been cut short. All the activities they love are canceled. Their band trip to Disney was canceled. Our summer vacation to Europe is canceled. They can’t even see their friends.

And they have not complained one time. They haven’t cried (wish I could say the same). They haven’t whined, asked to break the rules, or even griped about chores I’ve asked them to do. When e-learning started, they just went to work and did what they needed to do.

This sucks for them. I guarantee I would not have been so pleasant to be around had this happened to me at their age. I don’t know what I did to get such great kids but they are handling this with more grace than many adults. I’m lucky to have them. It makes being quarantined easy.

So, big shout out to my kids.
In terms of government response, it’s easy to bellyache about this or that shortcoming. And, on the federal level, a lot of it is definitely deserved. Add the two months of dithering and denial to the trash heap of Trump administration failings. The Guardian had a good article entitled “The missing six weeks: how Trump failed the biggest test of his life.” It details how the U.S. and South Korea experienced their first confirmed case of COVID-19 on the same day. South Korea sprang into action. Trump denied that this would be a big deal and did more or less nothing. Consequently more Americans will die than needed to, more of us will stay home longer than had to be the case, and our economy will be scarred more deeply. (A study of the 1918 flu pandemic suggests that earlier, more aggressive public health interventions result in significant economic benefits. “The effects are economically sizable. Reacting 10 days earlier to the arrival of the pandemic in a given city increases manufacturing employment by around 5% in the post period.”)
But what I’d really like at this point is evidence that someone has a plan for the endgame here. It feels like an Underpants Gnome situation:

What I’ve heard is all over the map and mostly from people with no kind of authority to implement whatever strategy we decide to pursue. Get the spread under control, deploy massive testing, and then track & quarantine infected people and their contacts? O.k., how are we ramping up the testing, how is it going to be deployed, what facilities and infrastructure are we going to put in place for the quarantined?

Or maybe it’s “stay in the bunker for 1.5 – 2 years until a vaccine is developed?” In that case, stay-at-home orders for two weeks at a time isn’t going to cut it. Neither is piecemeal employer-subsidized stay-at-home pay. We’ll need huge changes in the social safety net, educational systems, and tax infrastructure among probably lots of other things. If that’s the plan, we should probably be getting to work on the re-design. If we’re going to war with this thing for a couple of years (and, certainly in terms of lives cost, this will take a higher toll than most of our wars), we’re going to have to put ourselves on a war footing.

If there’s no plan for what we do after we “flatten the curve,” then that’s not ideal, but I guess I’d like that information as well.

That’s all I have for now. Hope you all are keeping safe and taking care of yourselves and your loved ones.