You are here: Home / General / Pandemic at the Disco

Obviously I couldn’t think of a title. I just felt like I should write about this pandemic in which we find ourselves. As a history major who studied World War I a fair amount, I’ve long had some familiarity with the flu of 1918. (The “Spanish” flu — mainly gaining this title because the WWI combatants kept their flu outbreaks secret for awhile as part of the war effort, so there was more publicity about the Spanish outbreak.) This isn’t that, exactly. Currently, this doesn’t look to be as lethal as the 1918 flu (which killed more people than the War.) But, God willing and the creek don’t rise, this will be as close as we come to that experience. On the other hand, the 1918 flu and other epidemics and pandemics should inform our response. And COVID-19 does seem to be more contagious and deadly than modern flu outbreaks and other diseases we’ve seen lately.

I’m usually one to reflexively dismiss “kids these days” type grousing about how we’re getting soft. But, in terms of disease, we truly do not appreciate how good we have it. The fact that anti-vaxxers are a thing really underscores that point. Reading histories and reports from before 1918, the disease situation was an absolute horror show. Smallpox, scarlet fever, measles, mumps, polio, tuberculosis, and typhoid are all diseases which loomed large the fears of our forefathers but have largely disappeared from our public consciousness. This monthly bulletin for April 1912 from the Indiana State Department of Health is metal as hell. 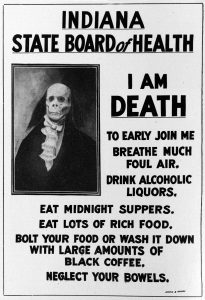 There are stories about a syphilitic attorney from Shoals; a fly who is born in manure, graduates with all of his maggot buddies, spreads typhoid, lays eggs, and gets into a ladies breast milk; the image featured to the right; and an evaluation of “Dr. Lindley’s Golden Remedy” among quite a bit more.

But the most rapidly spreading and deadly of the communicable diseases have been largely contained in recent generations, so we have sort of lost the muscle memory of how to deal with them. This inexperience has been exacerbated by the 24 hour news cycle. I know it’s popular to blame “the media,” but in this case, I think it’s appropriate to some extent. I see this news cycle as causing problems in two respects – first, it has cried wolf over the years. Anxiety about disease is a reliable way to draw eyeballs, so any time something new and different is spreading around to any extent, it gets intense media coverage. When those hyped diseases don’t materialize locally in any noticeable way, the media reporting takes on a “boy who cried wolf” quality. Secondly, any issue with a vaguely political angle is reliably hyped as a crisis or dismissed as a hoax. So, even reasonably well adjusted people don’t know how to calibrate their responses. People who reflexively catastrophize or minimize everything obviously aren’t going to get it right.

That’s why we rely on experts. It’s fashionable to glorify “street smarts” and to ridicule “book smarts,” but sometimes we really do need book smarts. And, our national leadership doesn’t have them. We have to allow some leeway for making mistakes during a rapidly evolving and uncertain situation, but even so, the federal government has not been making good decisions. I’m not blaming Trump for the virus or the fact that got to the U.S. That was probably inevitable. The travel restrictions to and from China probably did some good. However, the delays in testing and the decisions about making our own tests have left us blind and behind the curve. Many of the decisions seemed designed to limit the available data so as to control a media narrative and allow the White House to deny that there was much of a problem. I don’t care much for Ayn Rand in general, but there was a passage from John Galt’s rant that stuck with me where he talks about how “A” = “A.” At some point, no matter what you say about reality, certain aspects of reality can’t be talked away and are indifferent to anyone’s wishes, whims, or feelings. You don’t have to believe in a pandemic for it to hurt you and your family.  To the horror of the reality-based community, Trump’s approach was to wish it away. Also, he put Mike Pence in charge which, given his inadequate response to the HIV epidemic in Scott County while governor, was a poor choice. 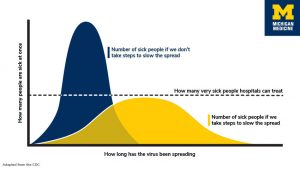 The state level response has been a little slow maybe but not necessarily bad. Much of that can probably be attributed to difficulty getting coronavirus tests. As I write this at 10:22 on Saturday, March 14, the ISDH website is reporting a total of 89 people being tested. That has to be insufficient. South Korea is testing something like 10,000 people per day. They can just drive up. South Korea has a little less than 10x the population of Indiana. A proportional response on our end would be testing 1,000 people per day. Sounds like we’re doing maybe 10 per day. Our county health officials are busting their collective asses and doing the best they can with the resources they have. They’ve been communicating with the public and issuing advisories about how the public can slow the spread.

One driving sentiment is that we don’t want to become like Italy. This disease is quite a bit more serious than the flu, but our health system seems to have the ability to treat the people who do become seriously ill if we are able to “flatten the curve.” In other words, if everyone gets sick all at once, the sheer numbers will overwhelm the capacity of our medical system in terms of available beds, ventilators, and health professionals. If we can slow the spread such that people get sick at different times, the health care system is better able to care for people as they get sick. This idea of flattening the curve is probably the critical piece of information being missed by people who regard our current response as a media-driven overreaction. There are some who just simply don’t understand exponential math, but there are others who understand the math but regard the deaths that are coming as sad but inevitable — such that we’re disrupting lives and the economy with no proportional payoff for the sacrifice. Ultimately, it will be difficult for decision makers to win. Do too little, and they will get hammered for inaction. Do enough or too much and people will complain that the pandemic wasn’t such a big deal after all.

On a personal level, my main hope is that my friends and family come through unharmed. Beyond that, this does provide an opportunity to look at people and the workings of society from a slightly different angle. In terms of business functions, many of us will have to take a hard look at what we do, why we do it, and whether it provides short term, medium term, long term, or no value. We’ll get a better idea of who among us really rely on direct, person-to-person contact and being constantly in motion versus those of us who are better suited to less in-person social contact and are more tolerant of a slower pace. Who is enjoying the break and who is climbing the walls? We’ll get a better idea of how people deal with stress and anxiety. Does having a problem calm you down and allow you to focus? Or does the stress make you manic and your thoughts chaotic?

When Isaac Newton was sheltering from the plague, he invented calculus and discovered gravity. No pressure.