This is installment 3.4 of my Indiana Bicentennial series. Installment 3 covers generally the period from 1832 to 1848. 3.1  discussed the national context. 3.2 focused on Gov. Noah Noble. 3.3 discussed Indiana’s Mammoth Internal Improvement Act of 1836. This installment will look at Governor David Wallace and Indian Removal in Indiana.

In 1837, Noah Noble’s Lieutenant Governor, David Wallace was elected as Indiana’s 6th Governor. (Wallace was the father of Civil War general, New Mexico governor, and author of Ben Hur, Lew Wallace.) David Wallace was elected before the financial depression hit and while the internal improvement act was still popular. However, things quickly went south for him and his term was dominated by the State’s financial struggles. As the Panic of 1837 disrupted the financial markets, property values plummeted, and construction on the internal improvements stopped; Wallace had the unenviable task of informing the legislature that the state’s credit had been exhausted and Indiana would soon be insolvent. By the end of his term in 1840, the state’s income covered only 20% of its expenditures—interest on the massive state debt being over two-thirds of the budget. 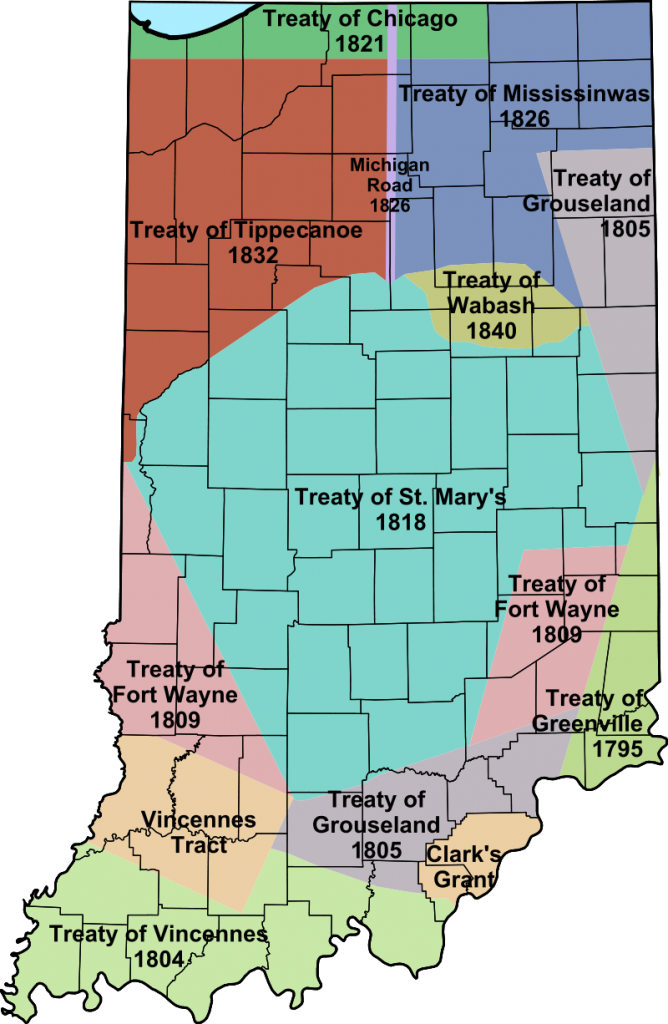 History of Indian Removal in Indiana

During Wallace’s tenure,  much of Indiana’s final Indian removals took place. In 1830, during the Jackson Presidency, the Indian Removal Act had been passed by Congress, making Indiana’s actions in this respect part of a nationwide trend (at least east of the Mississippi). “The Act established a process whereby the President could grant land west of the Mississippi River to Indian tribes that agreed to give up their homelands. As incentives, the law allowed the Indians financial and material assistance to travel to their new locations and start new lives and guaranteed that the Indians would live on their new property under the protection of the United States Government forever.” (Side note: the Supreme Court case of Johnson v. M’Intosh suggests that the Founders’ language about property rights being natural, inalienable, and independent of government as mostly happy talk that nobody believed in when it came to the property rights of Native Americans. As Chief Justice Marshall observed, “title to lands . . .  must be admitted to depend entirely on the law of the nation in which they lie[.]”)

Native American lands in Indiana had been ceded at various times, with the largest chunk coming from the Treaty of St. Mary’s in 1818. Among other things, that treaty required the United States to pay an annuity of silver to the Miami Indians. Shrewd and unscrupulous traders were able to make fortunes on the backs of such annuities. The general practice was to sell goods to the Indians on credit and then, when the annuity payments were set to come in, the traders would submit (often inflated) claims to the Indian agent who would pay the claims out of the annual Indian annuity payment, sometimes bypassing the Native Americans entirely. By the 1830s, the major tribes left in Indiana were the Potawatomi and the Miami. In 1838, the Potawatomi were removed from Indiana to Kansas in a forced march dubbed the Trail of Death. The march started in Twin Lakes, Indiana and ended near Osawatomie, Kansas. Pursuant to treaties that were, to some extent, disputed, the Potawatomi had agreed to give up their land and move west. When they refused to vacate the territory, Governor Wallace authorized John Tipton to mobilize a militia to forcibly remove them:

On August 30, 1838, General Tipton and his volunteer militia surprised the Potawatomi village at Twin Lakes. When Makkahtahmoway, Chief Black Wolf’s elderly mother, heard the soldiers firing their rifles she was so badly frightened that she hid in the nearby woods for six days. Unable to walk with a wounded foot, she was found by another Indian, who was looking for his horse, and brought to South Bend. Upon his arrival Tipton allegedly called for a meeting at the village chapel, where he detained the Potawatomi chiefs as prisoners. Although Father Petit was in South Bend at the time of the militia’s arrival, he later protested that the Potawatomi had been taken by surprise under “the ruse of calling a council.” Tipton reported that several of the Potawatomi had already gathered near the chapel when he arrived, but acknowledged that the Potawatomi were not allowed to leave “until matters were amicably settled” and they had agreed to give up their Indiana land.

Between Thursday, August 30, and Monday, September 3, 1838, the day before their departure, Tipton and his militia surrounded Menominee’s village at Twin Lakes, gathered the remaining Potawatomi together, and made preparations for their removal to Kansas. The names of the Potawatomi heads of families and other individuals, which numbered 859 in all, were recorded on tribal registration rolls. In addition, the soldiers burned the crops and destroyed the Potawatomi village, which consisted of approximately 100 structures, to discourage them from trying to return. Father Petit closed the mission church at Menominee’s village, explaining in a letter to his family dated September 14, 1838, “It is sad, I assure you, for a missionary to see a young and vigorous work expire in his arms.”

(See here for an account by Father Petit). During the 660-mile, two-month journey to Kansas, 28 children and 14 adults died. In Indiana, the route went south through Rochester to Logansport, then along the northern banks of the Wabash through Delphi, Lafayette, and Williamsport then west to the Illinois border — at times traveling down the Michigan Road along territory they had ceded in the 1826 treaty.

The Miamis held on somewhat longer. In fact, a good number were allowed to stay, and a fair amount of land was allotted (or, depending on your view — given as a bribe) to tribal leaders. For example, 43 members of Jean Baptiste Richardville’s family were given special consideration. Richardville was the nephew of the Miami war chief, Little Turtle by way of Little Turtle’s sister, Tacamwa, a French fur trader. He became a trader and controlled the portage between the Maumee River (which drains into the Great Lakes) and the Wabash (which ultimately drains into the Gulf of Mexico). The Maumee-Wabash Portage was an important piece of territory. It was described as the only “land barrier” separating the fur traders of Quebec from the fur merchants in New Orleans. Fort Wayne was established to assist the Americans in controlling that vital piece of geography. Due to his influence where he negotiated for the Miami, in various treaties, Richardville received 44 quarter sections of Indiana land (over 7,000 acres) in separate allotments. By his death in 1841, he was considered the wealthiest man in Indiana. When the Indiana Miamis were removed in 1846, it was only about half of them that went west to Kansas, leaving from Peru, Indiana and traveling west by canal boat and steamboat. About 323 members were removed with six dying along the way.