Robert Orr was not the star defenceman for the Boston Bruins. Rather, he was the son of an industrialist from Evansville. He mostly went to public schools but then enrolled in Yale where he received his bachelor’s degree before enrolling in Harvard Business School in 1940. However, World War II broke out, and he did not complete that degree. He joined the Army and served in the Pacific theater, eventually rising to the rank of major.

During his service, he met a girl, and after the war, they returned to his home in Evansville, and he joined the family business — primarily held in the Orr Iron Company. 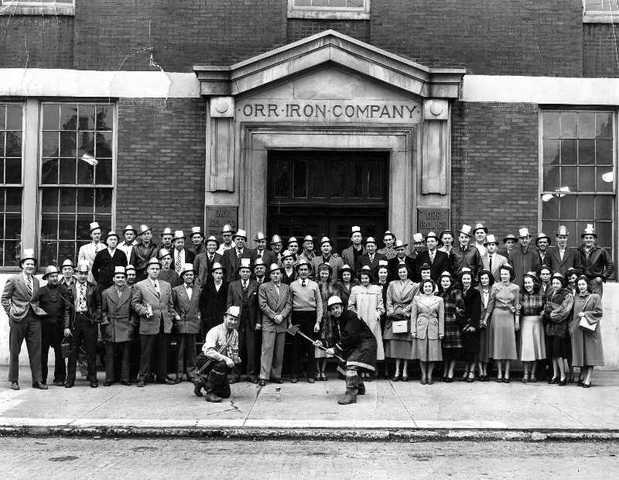 The transition away from a wartime economy created opportunities for Orr. With implements of war no longer needed, several companies were forced to close. Orr purchased, refurbished, and sold some of the factories. He became part of an economic development committee and involved in Republican politics. “His business and holding expanded rapidly and by 1953 he was on the board of twenty local businesses including Erie Investments, Sterling Brewers, and Grand Junction, and was director of twelve other companies.”

Beginning in the early 50s, Orr held a variety of positions in the Evansville and Vanderburgh County Republican Party apparatus. He was elected to the state senate in 1968 and served for five years until he was chosen to run as Gov. Bowen’s running mate. As lieutenant governor, he was in charge of the department of agriculture and department of commerce. Two of his initiatives during this time were creating Ohio River ports at Mount Vernon and Jeffersonville (the third Indiana port is up north at Burns Harbor).

In 1980, Bowen supported Orr’s nomination for governor, and he ran unopposed for the party nomination. In the general election, the Democratic challenger was John Hillenbrand. Bowen had been popular, and Orr ran on that popularity (with the slogan “Let’s Keep a Good Thing Going”), citing among other things, Bowen’s efforts to lower property taxes. The Kokomo Tribune described both men as trying to take advantage of Bowen’s legacy — Orr as the lieutenant governor, Hillenbrand as Orr’s chairman of the Department of Natural Resources. (The Tribune also described Orr as “a 62-year-old millionaire Evansville businessman” and Hillenbrand as “a 48-year-old millionaire businessman from Batesville.) Orr got much the better of that battle, defeating Hillenbrand by over 15% and 300,000 votes of 2.2 million cast.

Orr won a second term in 1984 by a closer margin than his first election. He ran against Democrat Wayne Townsend. Townsend was a state senator and the grandson of former governor, Clifford Townsend who had been governor from 1937-1941. Townsend lost by 5% in a year when Ronald Reagan had a landslide win over Walter Mondale. (Out of 2.2 million votes cast in the election, Townsend did about 200,000 votes better than Mondale, but still lost to Orr by 110,000.)

During his term, Orr took action to remove the state’s license branches from political control — undoing a piece of what had been an extensive patronage system in the state. Orr also oversaw an overhaul of the state’s educational system:

Mr. Orr’s major achievement was passage of a sweeping educational overhaul package in 1987. The ”A-Plus” package required student achievement exams, a new school accreditation system based on performance and rewards for schools that showed improvement.

Shortly after the end of the 1987 session of the General Assembly, the Chicago Tribune described the passage of the educational proposal:

Orr had championed education reform this year as critical to improving the lackluster performance of Indiana`s public schools and ensuring future economic growth. He proposed a $400 million plan in January that called for 10 more school days and 30 other initiatives designed to inject incentives and accountability into the education system.

The package received a chilly reception in the legislature, prompting Orr to launch a direct mail campaign to nearly 200,000 parents in the state. Ten thousand responded to the governor`s call for assistance.

In addition, leaders of some of the largest businesses in the state spent $300,000 on a media campaign to tell the public about Orr`s program.

The legislators eventually passed the governor`s $550 million, two-year program. They also added $81 million for other programs to increase state spending on primary and secondary schools by 9.3 percent in 1987-88 and 12.8 percent the following year.

The measure adds five more days to what has been the shortest school year in the nation, requires comprehensive testing of students and evaluations of teachers, offers financial rewards to schools that improve the most, and imposes financial penalties on schools that promote students who have not met achievement goals.

Students who fall behind will have to attend summer school, and school days lost due to bad weather will have to be made up.

The legislature also gave Orr some things he did not ask for, including a $20 million grant program for students at risk of underachievement because of poverty, broken homes and uneducated parents.

The session saw a significant increase in taxes to pay for $754 million in additional spending. The personal income tax was raised from 3 – 3.4%, the state cigarette tax was raised by 5 cents per pack, and a 15% increase was imposed on other tobacco products. This was the second major tax increase during Orr’s tenure. In 1982, to cope with the recession, Indiana raised income and sales taxes. 1987 also saw legislation to increase the speed limit from 55 to 65 miles per hour, sharp restrictions on smoking in government buildings, and approval of a referendum on whether Indiana’s ban on lotteries should be lifted.

Orr appointed Chief Justice Randall Shepard (of Evansville) to the Indiana Supreme Court in 1985 and Justice (later Chief Justice for a relatively brief period) and Brent Dixon (of Lafayette) in 1986. These two men were very influential jurists. Shepard served for 27 years and was active in reviving the Indiana Constitution into something more than an afterthought as compared to the U.S. Constitution, and in asserting authority over trial courts and making them more part of an independent judicial branch and less part of county government. Justice Dixon served for 30 years and became the second longest serving Indiana Supreme Court Justice after Isaac Blackford (who served from 1817 to 1853).