Mike Pence will move from presiding over Indiana’s 200th anniversary on December 11, 2016 to being the sixth Vice-President from Indiana – following in the footsteps of Schuyler Colfax, Thomas Hendricks, Charles Fairbanks, Thomas Marshall, and Dan Quayle.

He was born in Columbus, Indiana and graduated from Columbus North High School before going to Hanover in 1977. His home life was not politically charged. His father was an executive in an oil distributorship who, according to Pence, did not much care for lawyers or politicians. Pence apparently voted for Jimmy Carter, who was a good Christian and not a movie star. But Pence’s politics shifted to the right in college as his religious beliefs underwent a born-again transformation, and he had a history professor who opened his eyes to Reagan’s merits.

Pence graduated from Hanover in 1981. His LSATs were too low to get into law school, and so Pence served as an admissions counselor there for Hanover. He credits this as an opportunity to see the state as he served as a representative of the school during recruiting missions. Pence had better test scores the second time around and  went to law school at IU-Indianapolis which he graduated in 1986. (He apparently did not like it there, saying he wouldn’t wish law school on a dog he didn’t like.) After that, he got a job with a smallish law firm in Indianapolis where he did a little of everything, but the resume version is that he practiced corporate law. His legal career does not seem to have been a big part of his life. In 1988 and 1990, he ran against Representative Phil Sharp for a Congressional seat. He did fairly well in 1988, getting 47% of the vote but got shellacked in 1990, getting only 42% of the vote. He seems to have done some mud slinging in that second run for which he apologized after. One of the ads he ran reminds me of the World Wrestling Federation’s habit of having one of its heels being a caricature of the enemy du jour. In this case, the Iron Sheik: “an actor, dressed in a robe and headdress and speaking in a thick Middle Eastern accent, thanked his opponent, Sharp, for doing nothing to wean the United States off imported oil.”

Electoral success not having been in the cards, Pence went to work for the “Indiana Policy Review,” a conservative think tank where he worked for several years until his desire to have the group take more of a role in advocacy was at odds with its chairman. At that point, Pence had landed a radio show, “The Mike Pence Show” where he was able to take advantage of the end of the Fairness Doctrine and the rise of conservative talk radio.

While Pence was doing radio, Phil Sharp stepped down and was succeeded by Republican David McIntosh. In 2000, McIntosh left that seat to unsuccessfully run for governor against Frank O’Bannon. Pence decided to run for that seat and beat Bob Rock. (During this campaign, he suggested there was not a causal link between smoking and lung cancer.) For the twelve years, Pence was in Congress, he had little success in moving legislation. He sponsored 63 bills, the majority of them during his first term. None passed. However, his media background served him well, and he was often a spokesman for conservatives during this period.

In 2012, Pence stepped down from Congress to run for governor. In one of Indiana’s closer races, he beat out former Speaker of the House John Gregg by 80,000 votes – 49.6% – 46.4%. As an administrator and executive, he was not as effective as his predecessor, Mitch Daniels. While he shared a political party with the Indiana House and Senate, which were also dominated by the Republicans, friction due to poor communication was not uncommon.

Pence was opposed to labor and wage laws and he expanded the state’s educational voucher program. Originally vouchers had been billed as a way to give options to poorer students in bad schools. Under Pence, voucher money was made available to families of greater means and even if their students had never attended public schools. This voucher funding was increased even though public schools had never been restored to the funding levels they had enjoyed prior to the 2008 market crash. 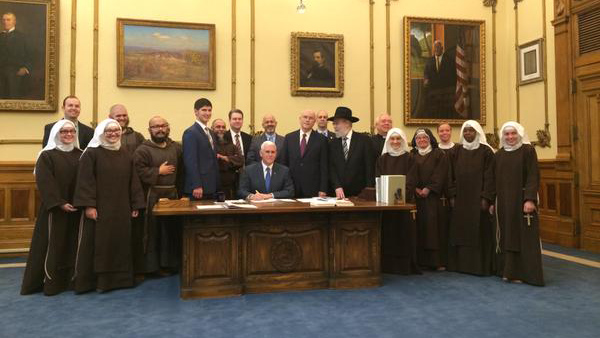 The biggest news for Pence during his tenure was the Religious Freedom Restoration Act debacle. Defenders claimed that the bill was merely an extension of long-time federal legislation to the state level in order to preserve religious rights. Detractors saw it as Pence and religious conservatives using it to attack gay people in the culture wars.

The rhetoric accompanying the recent push lends support to the proposition that there was discriminatory intent, at least in some circles. Governor Pence said, “this bill is not about discrimination, and if I thought it legalized discrimination in any way in Indiana, I would have vetoed it.” But the fact remains that supporters of the bill voted against amendments that would have provided clarity on the issue of discrimination.

There was a public backlash over the bill and Indiana made national headlines. Businesses urged repeal. In a move that did not really satisfy anyone, the uproar prompted the legislature to sign a “fix” that moderated the legislation somewhat.

After that, it looked like Pence’s obvious ambition for national office would be unrealized. However, the unlikely Trump Presidential campaign scrambled the national political landscape. Pence was facing an uphill re-election battle in a re-match against John Gregg, and prominent Republicans were distancing themselves from Trump, feeling that he would go down to defeat. Pence gambled by dropping out of the governor’s campaign to run as Trump’s vice-presidential candidate. The gamble paid off for him, and he will be our next Vice-President.

In another unlikely turn of events, Pence had pushed out his former lieutenant governor, Sue Ellspermann, who had been reportedly disagreed with Pence on LGBT issues. Pence replaced her with Eric Holcomb who had been running for the U.S. Senate seat being vacated by Dan Coats. Holcomb had been an advisor to Mitch Daniels, chairman of the Indiana Republican Party, and chief of staff to Coats. Catching a Trump wave in Indiana, and perhaps benefiting from not having Pence’s baggage, Holcomb beat Gregg by a wider margin than Pence had in 2012.

And that, my friends, brings us to the present day. We’ve gone from John Jennings to Eric Holcomb. On Sunday, December 11, 2016, I’ll wrap this up with some closing thoughts to celebrate our bicentennial.