The bill title sounds like it could make a good movie or book title for some reason. But I digress. The 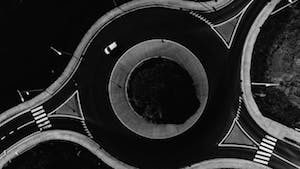 Senate is considering Rep. Torr’s HB 1039 on second reading. It’s part of the Carmelization of our roadways and governs the right of way in roundabouts. (I see that the legislation does away with the term “rotary traffic island.”)

I had a little trouble visualizing what was going on from the language. But, it sounds like if you’re dealing with two or more lanes in the roundabout, cars have to yield to long or wide trucks (40 feet long and/or 10 feet wide) and if there are two long trucks in the roundabout, the one on the right has to slow down and yield to the one on the left.

Like I said, I might have this wrong, but it sounds like a situation where the long truck might not be keeping to its lane very well. The duty to yield doesn’t apply when the truck is entering the roundabout from the side. If it’s only one lane wide, then I don’t see where yielding within the roundabout would come up. And, if it’s separate lanes, ordinarily there wouldn’t be any yielding because you each have your own lane. But, if you have a long truck and a tight circle, staying in your lane might be a little tough.