You are here: Home / 2018 Indiana General Assembly / HB 1011 – All Players Stand or Triple Your Money Back! (Face Value Only. Some Restrictions May Apply) 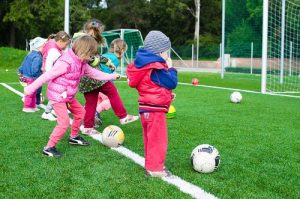 “As your financial adviser, I can’t recommend that you continue attending your daughter’s soccer games. There’s just no profit in getting offended there.”

Rep. Milo Smith has introduced HB 1011 which rewards people for being offended if they attend games of the NFL, the NBA, or the WNBA and the players kneel during the national anthem. Soccer fans offended at Indy 11 games or baseball fans offended at Indians games will have to be made of sterner stuff.

Specifically, the legislation says that if a person purchases a ticket, attends the game, and the person “is offended by a professional sports athlete, who is a member of the professional sports team hosting the game, not standing during the national anthem” then the person can demand their money back (face value only) and the team then has 7 days to pay. If they don’t pay up, the person can go to a small claims court (but cannot – as the legislation is written – go to a court of general jurisdiction) and be awarded triple damages, costs, and attorney’s fees. The genius part here is that with triple damages, rich people (who buy more expensive tickets) can profit more from their hurt feelings than regular folks in the cheap seats. Stoic people are just shit out of luck.

The partisan temptation is to take shots at people who are offended by players kneeling during the national anthem because they aren’t recognizing the underlying issue that players are kneeling, not to show disrespect, but to protest structural problems with the way black people are treated in the country. However, I know people who legitimately don’t harbor ill-will toward people of color but who nevertheless have a heart-felt, negative response to people kneeling during the national anthem. My personal view is that these folks are too dismissive of the underlying reason for the protest and are misconstruing the intent of the players. But, often, I don’t think they are bad people; and I don’t want to mock them. (Even were I inclined to mock them, doing so would cause them to be even more supportive of politicians like Smith — which is, of course, what he would like.)

This legislation, however, is a different matter. It is transparently unconstitutional. It specifies a particular kind of speech (not standing during a national anthem) at a time when the context makes this clearly a governmental burden imposed because of the content of the message. And, it is conspicuously under-inclusive, singling out only football and basketball players. (And just the players — there’s no recovery if only the coaches are kneeling.) I can speculate that the constitutional challenges have been explained to Rep. Smith. As such, it looks like a cynical ploy to exploit the passions of a portion of the citizenry that bristles at anything that looks like disrespect for the flag. Those citizens feel what they feel even if, given the context of the protests, they are misguided about whether any disrespect is intended. Regardless of whether we can give citizens taking offense to player protests the benefit of the doubt, lawmakers should be held to a higher standard.