You are here: Home / General / Floods

My neck of the woods – Lafayette and parts north along the Wabash and Tippecanoe Rivers are getting hit pretty hard by flooding.

The town of Remington, about 30 miles north of Lafayette, is closed to all traffic except for emergency responders. This morning, U.S. Highways 24 and 231 were shut down as they lead into Remington.

The Oakdale dam in Carroll County is seeing record volumes. 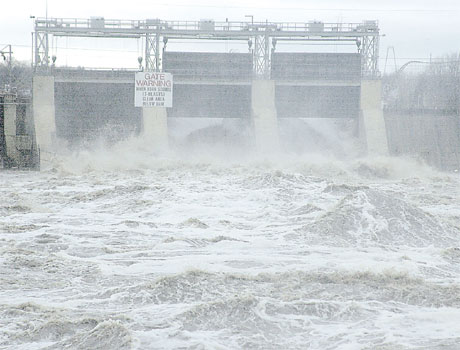 He said 4 to 6 inches of rain fell in about 12 hours overnight. Most affected are areas north of and near Monticello. They’ve had reports of some roads under water as deep as 13 inches.

“This is a big-time, summer thunderstorm,” Shipe said, “falling in the worst possible situation: on winter time soils, where they were very wet and had snow cover less than three days ago and may have been partially frozen because they had zero temperatures.

“It results in nearly 100 percent run off, very little is absorbed.”

People who live south of the dam are being evacuated. A relief center is being set up in Delphi. Monon is experiencing heavy flooding. Some bridges in Newton County have been damaged. Most of the streams in Benton County are out of their banks.

The Monticello Herald Journal has some additional coverage. I used to live about 1/2 west of Lake Freeman, above the Oakdale Dam and below the Norway Dam. I don’t know that my old house would have been in any particular flood danger, but I’m happy to be well removed at the moment. Small amounts of water are actually coming over the top of one of the dams according to White County Sheriff John Roberts. 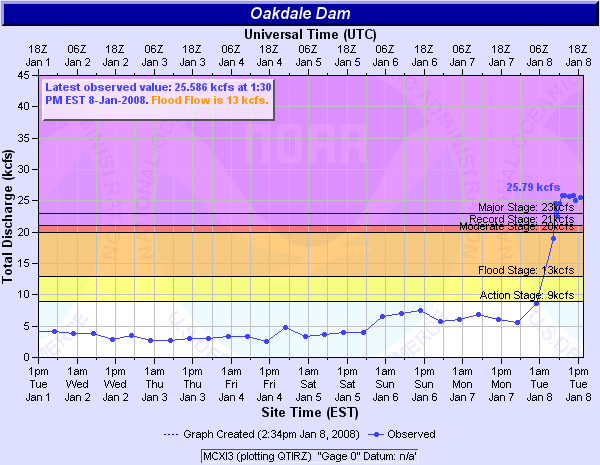