So, I was in an auto accident back in mid-June; very minor stuff. I was stopped at a red light, and a guy rear-ended my car, some healthy damage to the back corner of my car, but nothing else really. It was a hassle, but everyone in the chain has performed admirably; with one notable exception.

The guy who hit me, apologized, was very nice, and was insured. The Lafayette Police Department officer was on the scene promptly, and took care of business efficiently. I called and reported to my insurer but indicated that I was going to get my car repaired under the other guy’s insurer, State Farm. The State Farm claim rep didn’t give me any hassles, just asked where I wanted to get my car fixed and hooked me up with a rental vehicle. It was a Saturn, so I took it to Bob Rohrman Collision, and they took a look, wrote up an estimate, and got it fixed within a couple of days.

The LPD officer had advised me that I’d be getting a notice from the Indiana BMV asking for proof of financial responsibility – apparently they are requiring that of everyone who gets in an accident under IC 9-25-5-2, regardless of fault or lack thereof. Eventually, on July 30, I got the notice from the BMV with the form for providing proof of insurance. It instructed me to give it to my insurer who was to complete the form and provide it to the BMV prior to September 7, 2010 to show that I was, in fact, insured at the time of the accident. On August 16, I called my insurance adjuster on the claim and faxed the form to her. On August 17, she faxed and mailed the verification.

So, imagine my surprise this weekend to receive a Notice of License Suspension dated September 7, indicating that they had suspended my license because they had not received proof of financial responsibility. First thing this morning, I called my adjuster with some concern. Her response, “Oh, they do this all the time.” She provided me with a copy of the fax confirmation sheet, showing that she had, in fact, faxed the copy to the BMV. They got it 3 weeks early, couldn’t process their paperwork, but could spit out a license suspension notice.

So I have absolutely followed every rule in this situation – I had insurance, I was not at fault for the accident, I turned in proof of insurance well advance, and the Indiana BMV is still screwing with me.

Any legislators who happen to read this thing – here is a nice hanging curve ball to knock out of the park politically. Nobody likes the BMV, they have a system that appears to be very broken (from my adjuster’s reaction, I am far from the first person in this situation), and an angry electorate would presumably enjoy seeing an unresponsive bureaucracy raked over the coals a bit. As for a good legislative fix – perhaps mandate that the BMV is not permitted to suspend any licenses under this provision until they have processed all certificates of compliance received by the bureau on or before the particular due date. 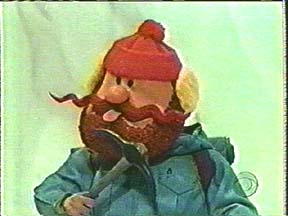 Yukon Cornelius: You’re going to stay with me and we’ll all be rich with the biggest silver strike this side of Hudson Bay. Silver!

Hermey: I thought you wanted gold.

Yukon Cornelius: I changed my mind.

Senator Greg “the Flogger” Walker, the man who replaced the estimable Sen. Garton, has introduced SB 453 which would require state and local government to conduct transactions in gold. Among other things:

[A]fter December 31, 2009, the state and political subdivisions may not compel or require any person to recognize, receive, pay out, deliver, promise to pay, or otherwise use or employ anything but gold and silver coin (in that form or in the form of a designated electronic gold currency) as media of exchange with respect to [taxes, loans to the state or political subdivision, purchase or sale of real estate by the government, condemnation payments, court judgments, or contracts or wages with the government.]
. . .
[A]ll payments to the state required under IC 6-7 (tobacco taxes) must be made in electronic gold currency.

What’s next? The Ron Paul dollar to be the official currency of Indiana?

What a wild week it’s been in D.C. You have the Congress taking a firm stand in favor of torture and against the Great Writ. Mostly along party lines, Congress passed legislation that:

The way the legislation is written, coupled with the relevant Geneva Conventions, the President is empowered to determine what forms of sexual assault, short of actual penetration, are permissible as interrogation techniques.

Which brings us to Friday of this week when Florida Republican Mark Foley’s hasty resignation from Congress after the “icky e-mails” began to surface. Apparently the e-mails were sexually explicit and directed to a 16 year old male Congressional page. This is particularly egregious since Foley was, among other things, a former co-chair of the House Caucus on Missing and Exploited Children and one of the most vocal opponents of child pornography. Even more problematic in some ways is the fact that House leaders, including Dennis Hastert and John Boehner, knew of Foley’s e-mails to the House page since at least Spring of this year and did nothing about it.

And, finally, just to add to the mix, Former House Majority Leader Dick Armey (R-Texas) said that what is wrong with the Republican Congress these days is that they bow to the “thugs and bullies” who lead the Christian Right.

Former House Majority Leader Dick Armey has launched an attack on Focus on the Family founder James Dobson, saying Dobson and his “band of thugsâ€ are “nasty bulliesâ€ and accusing the Republicans of pandering to the Christian right.

He said that the GOP was adrift and rudderless in its commitment to small government. He went on to say:

“The criteria of choice in just about every behavior you see in Congress today is politics. Where in the hell did this Terri Schiavo thing come from? Thereâ€™s not a conservative, Constitution-loving, separation-of-powers guy alive in the world that could have wanted that bill on the floor.

“That was pure, blatant pandering to James Dobson. Thatâ€™s all it was. It was silly, stupid, and irresponsible. Nobody serious about the Constitution would do that. But the question was will this energize our Christian conservative base for the next election.â€

Sager asked why it seems that Christian conservatives are more powerful now than in the 1990s. Armey replied: “To a large extent because Dobson and his gang of thugs are real nasty bullies. I pray devoutly every day, but being a Christian is no excuse for being stupid. Thereâ€™s a high demagoguery coefficient to issues like prayer in schools. Demagoguery doesnâ€™t work unless itâ€™s dumb . . . These issues are easy for the intellectually lazy and can appeal to a large demographic.â€

Amen, brother. Which is probably why we’re starting to see groups like the First Republicans try to steer the party back to its small government, fiscally conservative, socially tolerant roots.

A short recap of some of the lameness in the General Assembly this week:

Rep. Foley’s Court Packing plan. Representative Foley jammed an amendment on the judiciary into a vehicle bill, leading to a party line vote in the House Rules Committee. Essentially, it sought to pack the judicial nominating committee with Republicans and stack the deck against retention of 5 Democratically appointed judges up for election in November.

Anti-anti-gay bias kerfluffle Representative Thompson was trying to insert his language into a place where it didn’t belong. (A bit ironic if one considers the metaphor.) He wanted to prohibit localities from attempting to ensure equal employment and housing opportunities for gays. He tried was trying to slide it into a non-traditional location: an eminent domain bill. Both of them had to do with laws, so I guess that clears the germaneness hurdle.

Playing God. The Committee on Veterans Affairs tells physicians how to practice medicine and legislates the beginning of life. The House Committee on Public Policy and Veterans Affairs, of all committees, passed legislations that commands a physician to treat his or her patient by telling her, regardless of the truth of the matter, that human life begins at conception. It requires the physician to provide certain additional information to the patient that stacks the deck against having an abortion, regardless of what’s in the best interests of the patient.

Doin’ the time zone shuffle. The good folks in Pulaski County petitioned for Central Time, were denied in the preliminary phase, didn’t submit any new evidence but were shuffled into Central anyway in the final rule. Meanwhile, St. Joseph County was forced out, and so Pulaski County was considering asking the USDOT to reconsider. They were supposed to have a special hearing last Monday, but I never heard what happened.

More Power for Emperor Daniels Under a transportation privatization bill, the ever power hungry Governor Daniels stood to gain the authority to sell off most of Indiana’s transportation infrastructure. Not just the Toll Road, but airports, ports, roads, and anything else that wasn’t nailed down.