You’re a fucking idiot. What makes you so fucking smart? I hope someone
murders you.

I’ve said some inflammatory things in my time, but I tend to keep my discourse civil at In the Agora since it’s a forum that leans pretty well to the right, but is generally a good place for more or less rational discussions. So, I have absolutely no idea what sent this yahoo off his rocker.

Jeeze, hard times ahead. GM chairman: Automaker to cut 25,000 jobs. That’s out of a total of 110,000 hourly workers. He cites the insane cost of healthcare. Our failure to control healthcare costs is now very visibly cutting into our bread and butter economy.

“You can’t out-smart carnival folk. They’re the cleverest folk in the world. Just look at the way they sucker regular folk with those crooked games.”
—Home Simpson.

The Evansville Courier Press has an article on low power radio stations entitled Low Power, Higher Calling. Back in 2000 the FCC passed rules that allowed for low power radio stations. Seems like they got hung up back in ’96 or ’98 or so, and I stopped paying attention. I remember having been annoyed because I had visions of garage-based operations playing obscure music, discussing things of local interest, and generally providing an alternative to the same-old thing.

Turns out about half of these licenses have been snatched up by Christian groups. According to the article, there isn’t much local involvement in programming the station. The folks they interviewed basically plug in network offerings out of Nashville and let it go. That’s disappointing to me. Already, if you listen to shortwave, most of the English speaking offerings seem to be the BBC, Voice of America, maybe the CBC if you’re lucky, and wave after wave of Christian broadcasting. More power to them if they have the will and the ability to fill up the spectrum. I’d just like to listen to something else. As it is, I went to XM — at least they provide musical offerings that isn’t the same old thing. But, for obvious reasons, they don’t have any particular local offerings.

The FCC has a Low Power FM Radio Service at: http://www.fcc.gov/mb/audio/lpfm/

You can search that site for offerings in your area. For example, I see that in my area there is:

I just noticed this story in the Richmond Palladium-Item. Primarily, I noticed it because it talked about students drinking at Miami University just over the border in Ohio. As luck would have it, I was known to occasionally have a drink or two at Miami University. O.k., o.k., so the bartender knew my name . . . even 5 years after I’d graduated and left town.

All levity aside though, the article is about 3 students who died in a fire, at least in significant part because they’d been drinking and were likely passed out when their off campus house caught fire. Some “smoking materials” caught the downstairs couch on fire and the students apparently never woke up. This one caught my attention because the fire was about a block away from where I used to live.

During the day, uptown Oxford is relatively calm, with students walking to class or taking some time to window shop. Come back at night, though, and it’s not uncommon to see long lines forming in front of uptown bars with students, locals and out-of-towners looking to have a good time.

The administration, police officials and Miami students agreed drinking — both legally and underage — is one piece of the entire puzzle that makes up Miami’s lifestyle.

“I think it’s obvious that there is a drinking culture on this campus as well as many residential campuses,” Wissing said. “I think (drinking) is associated with the collegiate lifestyle nationwide.”

When I was there, there were 15 bars in 3 blocks. I’d say Miami very much has a drinking culture. My favorite bar had beer specials as follows: Monday – 50 cent 16 oz beers; Tues – $1.25 longnecks; Wed. – 50 cent 16 oz beers; Thurs – $1 Gennessee pounders (16 oz cream ales); Fri – $2 32 oz beers; Sat. – $3 pitchers (64 oz); Sun. – no special. With that kind of bar concentration and those kind of beer specials, you’re going to have some binge drinking. Don’t get me wrong, I loved it while I was there. But, if you’re serious about taking down the drinking culture, reduce the number of alcohol permits and figure out a way to get the bars to jack up their beer prices. On the other hand, instead of another round of hand wringing about binge drinking, student housing was ridiculously run down — you might get serious about making sure those tinder boxes are up to code.

Adding to my ongoing concern about the tension between science and religion, I see that our activist, anti-religious courts have allowed a reckless homicide conviction against a couple who didn’t seek medical attention for their critically ill child, instead relying on the power of prayer. The Indy Star has an article entitled Jury rejects prayer defense in baby’s death.

What the Schmidts did to help their critically ill daughter, Rhianna Rose Schmidt, was not disputed at trial. They never sought medical assistance or treatment. An autopsy showed Rhianna died of sepsis, a blood infection contracted at birth — an infection that could have been cured easily, a doctor testified.

Rhianna did not breathe for 38 minutes after birth, Maleta Schmidt testified. The infant stopped breathing three other times.

The Schmidts testified that in each instance, they turned to prayer and the elders of the General Assembly and Church of the First Born to heal her.

From my experience using sarcasm as a means to critique the anti-gay marriage amendment, I know that a disclaimer is necessary. Some folks wouldn’t recognize sarcasm if it hit them upside the head. When knowledge obtained from scientific observation contradicts knowledge received as religiously revealed truth; I’ll side with the scientific observation every time.

I don’t know the details of this child’s health prior to death. If the child was far enough gone, prayer might have been more helpful than taking the kid to a hospital to have wires jammed in her before she died. But if there was a reasonable shot at survival, we can’t let parents’ religious beliefs cause the death of their children.

Forbes ranked Bloomington, IN #10 and Lafayette #24 in its list of best small cities for businesses and careers. The Top 25:

This is just generally cool. As reported in National Geographic (among other places) in an article entitled Papyrus Reveals New Clues to Ancient World, Oxford University scientists are using a multi-spectral imaging technique to read ancient papyrus documents that have faded.

Salvaged from an ancient garbage dump in Egypt, the collection is kept at Oxford University in England. Known as the Oxyrhynchus Papyri, the collection includes writings by great classical Greek authors such as Homer, Sophocles, and Euripides.

Using a technique called multi-spectral imaging, researchers have uncovered texts that include

By request, a picture from the road: 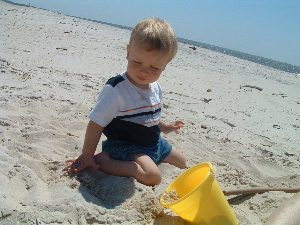 I’m such a geek that I’m filing entries from the road. I found a little coffee shop in Dauphin Island, AL with good coffee and an Internet connection. For those of you looking for spring vacations with a beach but without a lot of Spring Break craziness, Dauphin Island seems to fit the bill (at least that’s my impression after all of one day.) Lots of young families here — which was my goal. We’re with my buddy, his wife, and his 20 month old child. (My boy is 19 months, so it really works out.) I’ve gotta say, a *lot* of Christian radio on in Nashville Saturday morning at 1 a.m. or whatever it was. Just couldn’t help thinking, “o.k., you’re Christians, I get it! Now play some music.” But, if that’s what the market there wants, so be it. I just flipped over to my XM radio and listened to the Blues.