On November 4, 1996, I was sworn in as a member of the Indiana Bar, officially making me a lawyer in the state of Indiana. By the end of the month, I started my first job as a lawyer, working in the Office of Bill Drafting and Research in the Legislative Services Agency. I honestly cannot remember if I had landed the job at the time of the induction. I think not. I do recall that I had applied for the LSA job and was rejected. Then, a week or two later, they called me in for an interview. Apparently another position had opened up. In fact, four of us started at about the same time. (One of those guys is now the director of the Office.) 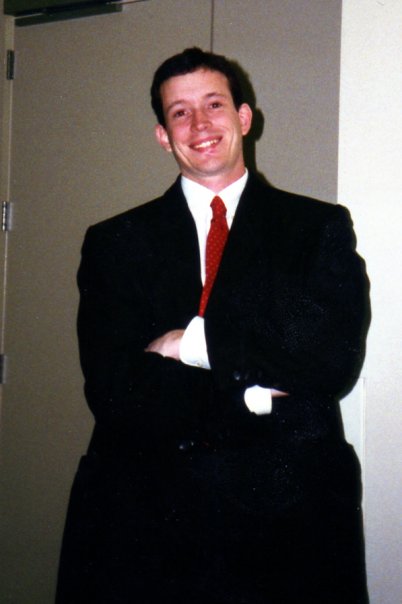 Picture taken in Indianapolis at the bar induction ceremony.

I pretty much always knew I wanted to be a lawyer. When I was five years old, I recall being concerned that maybe my inability to read might be an impediment to becoming a lawyer. But, then — I reasoned — my secretaries could read to me. Problem solved! There were a couple of moments of doubt. I wanted to be a Cincinnati Red during the Big Red Machine days. My never playing baseball at any level pretty much took care of that issue. When I was maybe 12 or 13, I recall that being a lawyer was tied with “astronomer.” The last potential fork in the road was during my college search. I had it in my mind that I would either go to IU to study business (and then potentially law school) or go to Miami to study history or political science and then go to law school. (Miami had a fine business school — why I wasn’t considering business there is unclear to me now.) Mrs. Keller, my English teacher, wife of a local attorney and family friend, and Miami alumna herself put in a plug for Miami. That’s where I went, and from that point, law school was always in the cards. I majored in political science and history which didn’t exactly tempt me with non-legal career options. My grades were good but not dazzling. My LSAT scores were excellent, and I was accepted to IU-Bloomington before I got around to completing any other law school applications, and off I went. Again, at IU, my grades were good (good enough for a cum laude designation at graduation) but not dazzling.

Studying for the bar exam was a slog. It’s one of those things where you never know if you’ve done enough. And the prospects of not passing were unpleasant, so it’s possible I over-studied. I was all nerves at the bar exam until someone near by started crying. I figured I was nowhere near crying, so I’d probably be o.k. There was a brief moment of terror with respect to the results. I had the results mailed to my folks place. (At the time I was filling out the application,  having just graduated and not having a job, I didn’t know where I’d be by the end of the process). So, my mom opened the results and called me. I wasn’t home, so she left a message on the answering machine. “Hi Doug,” she said. Then she sighed. And I knew the only reason she’d be calling that day would be because of the results. My heart dropped at that sigh. But, apparently she just needed to take a breath. Because the rest of the sentence was, “you passed the bar exam.”

I kept passing out the applications, looking for a job. And, finally, I caught my break with LSA. That was a great job for a young lawyer. Mainly I was charged with writing proposed legislation for the General Assembly. That helped a great deal with becoming familiar at a very granular level with the Indiana Code. After about a year and a half, I got a promotion and became a deputy director with the Office of Code Revision at LSA. In that capacity, I was mostly editing draft legislation prepared by other LSA lawyers. Despite the errors that often riddle this blog, that helped me a great deal with my writing. You’re looking for as much clarity and precision as possible when drafting legislation. (Obviously we sometimes fell short of that goal!) Another side benefit of my time at LSA has been this blog. Long time readers know that I have deviated greatly at times, but reviewing and commenting on legislation proposed by the General Assembly has been a mainstay. The years of writing have allowed me to make a great many friends, both online and in person. (Maybe I’ll subject you to a “12 years of blogging” retrospective in about 11 days here.)

While at law school, I met Amy. I graduated before she did. But, then she graduated and, while I was still in Indy working for the General Assembly, she went north and got a job in Monticello. In 1999, I decided that I wanted to be with her, and I wanted to be in private practice. So, I papered Lafayette with resumes. I got lucky. I fell in with Hoffman, Luhman, & Busch — a small firm with some great lawyers; great, both in terms of being skilled lawyers but also in terms of being outstanding people. I’m reminded of how lucky I was when I remember that, not long after I moved to Lafayette, I saw a help-wanted ad for another area lawyer. A year or two after that, that lawyer was losing his license for unethical behavior. I didn’t know anything about the lawyers in town. I could very easily have ended up in a very challenging situation.

Instead, the job has been very rewarding. Certainly I know guys who went on to make a lot more money than me. But the work/life balance has been very good, and the work itself has been varied in a generally interesting way. I keep busy, but it’s the kind of practice where I’m able to leave early to go coach the kids’ soccer teams or do something for the school board or what have you.

The legal work started mostly with collections. That’s actually not as bad as it sounds. It gave me the opportunity to work on hundreds of generally low-stakes cases. I got to meet a lot of judges and see a lot of lawyers work under circumstances where, if I made a mistake, it generally was not consequential. Although, at some point while collecting on some Community Corrections cases, I wondered at how strange the world was. The court would generally have me see what I could work out informally with the debtors before taking up the judge’s time. So, I was standing in a room with maybe 25 convicted felons where I was trying to extract money from every one of them. When I was a mild-mannered, geeky, skinny kid in Richmond, I would not have predicted that life event. But, again, not as bad as it sounds. I learned that, mostly if you treat people with respect, they’re easy enough to get along with.

As I got more experience, the partners at the firm, 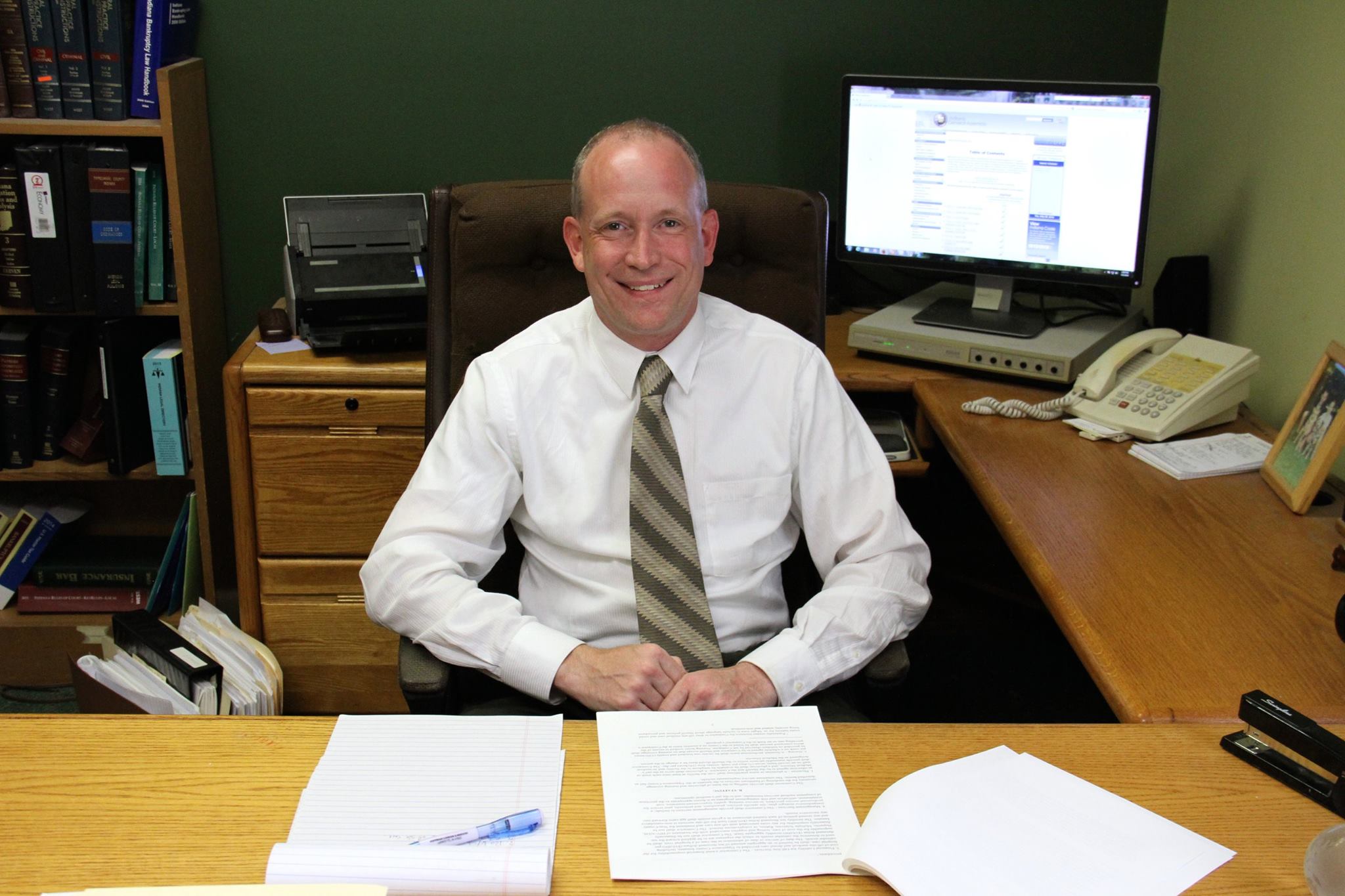 Dave Luhman and Tom Busch, gave me more and more of the County work. Throughout my time in Lafayette, it has been a true honor to work for Tippecanoe County.  Fred Hoffman had been County Attorney for quite sometime in, I believe, the 70s and 80s. There was a stretch where the work went elsewhere, but Dave and Tom resumed our relationship with the County maybe 3 or 4 years prior to my arrival. It’s only the last two years that I’ve considered myself “the County Attorney,” but I’ve been doing work for the County for at least 15 years. That role really stepped up in 2002. Dave and Tom had made me a partner with the firm, effective January 1, 2002. Then, three weeks later, there was the unfortunate passing of Judge George Heid in Tippecanoe County Superior Court 2. This presented an opportunity for Tom who would shortly go from “Tom” to “Judge Busch.” Due to the circumstances, he left with relatively short notice. I took on a lot of Tom’s active cases, and it felt like the training wheels were off. My first big case following his departure was handling the County’s end of Severson v. Board of Trustees. It was a relatively high profile case where a Purdue resident-advisor had been murdered by a student in his resident hall. Among other things, there were allegations against the Sheriff’s Department having to do with whether they should have done more to protect the resident-advisor after he reported the student’s drug dealing activity.

Since then, my practice has generally had a nice mix of the routine stuff that isn’t terribly interesting but pays the bills and doesn’t keep you up at nights with cases that are either high stakes or legally interesting or both. Some notable ones include “the pig case” which went on for five years before resulting in my first jury win. There was a case involving the Sheriff’s Department’s use of force when responding to another tragic case where a woman’s ex-boyfriend murdered her son and kidnapped her. There was a trial where a family friend was called to the stand as an expert witness for the opposing side. (My wife wanted assurances that this wouldn’t ruin our friendship. It did not — his expertise was perfectly valid, he was just being asked by the other side to assume the truth of certain underlying facts which where very much in question.) There was the small claims case where the defendant, representing himself, challenged my witness by asking “didn’t your friend tell you that I was an asshole?!” I objected to the relevance. But, I think the judge was having a slow day — he gave me kind of a grin and said, “I’ll allow it.” There was my first argument in front of the 7th Circuit where I drew a panel in which Judge Posner lead the questioning. Talk about trial by fire. I’ve even had the opportunity (pdf) to argue in front of the Indiana Supreme Court.

In fact, now that I sit and think about it, there have been lots and lots of cases.

And this is part of why I wanted to be a lawyer. Life and people are complicated and interesting. As a lawyer, you get to see a wide swath of what’s going on in the world — or at least in your community. And you get to see it up close. This isn’t always pleasant, of course. There was one time where I had two active cases, one featuring autopsy pictures of a little girl who had been murdered and the other involving the rape of one child by another, older child. I definitely hugged my kids a little more often when I got home during that period of time. But, seeing the good and bad of the human drama is one of the privileges of being a lawyer. It’s very rewarding when you can help your clients navigate life’s challenges, both big and small. Even as I’ve been practicing for a long time, I try to remember that — for most of my clients — being involved with the court system is a significant event in their life. The law can be terrible in its strength. It is often unforgiving, and it can be imprecise. That’s why having an advocate is so important. That is one reason why being a lawyer is a privilege, a responsibility, and a profession.

I hope to be at this for many more years.