You are here: Home / General / The Kids are All Right: Part the Millionth 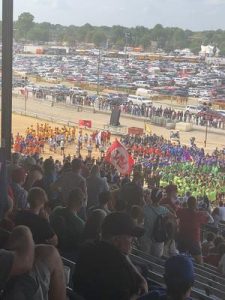 Bands gathering on the track awaiting the results of the first session.

I know I don’t write that much here anymore, and often when I do it’s to push back against the idea that “kids these days” are somehow defective. But, like Paul McCartney said when he finally freed himself of that Beatles albatross and joined the Wings juggernaut, “what’s wrong with that, I’d like to know, because here I go, again.”

Yesterday, I went to the Indiana State Fair for band day. My son is a member of The Sound of West Side Marching Band. For the past two weeks, those kids just busted their collective asses from 8 a.m. to 8 p.m. Monday through Thursday, more practice the first Friday followed by a competition in Noblesville that night that brought them home around midnight, more practice the second Friday from 8 a.m. through 4:30 in the afternoon, and then a State Fair band day that had them reporting at 10 a.m. and getting back at about 1:15 a.m. Sunday morning. This is during summer vacation. With that work, they placed 11th at the State band competition. Clearly I’m biased and proud of those kids. But we were just one school with one band. All over the state, there are kids putting in similar kinds of effort. I don’t know what they’re putting in the water in Wayne County, but their bands made up 25% of the top 16: Richmond, Northeastern, Hagerstown, and Centerville. One of my favorites last night, Winchester, isn’t too far away in Randolph County. And — while I have no background in this stuff and don’t necessarily have an expert eye – Jay County, Anderson, and champion Noblesville seemed to be a cut above the other outstanding schools. (Oh, and honorable mention to Monroe Central which didn’t compete in the night show, but led the 1-A schools and just killed it, particularly when you consider how few kids they probably have to work with.)

And that’s just the bands. One of the things I’ll miss next year when my daughter is in the marching band is walking the exhibit halls with her. These are halls filled with the winning crafts and projects. Kids all over the state are doing great work. (One of the categories this year was aerospace — I was hoping Tippecanoe County would dominate, but no such luck!) Beyond a quick trip through the cow barns, I didn’t even get to the livestock, which similarly consumes a great deal of time for the “kids these days.”

Sure, you can say I’m cherry-picking because only a small percentage of kids are involved in the things I’ve mentioned above. But, I think I’m less guilty of cherry-picking here than those who bellyache about how kids are “these days.” What’s the ratio of band kids to kids who eat tide pods? Which have you heard more about this year? And, in a slightly different way, it’s cherry-picking when the oldsters use the past as a comparison. Nostalgia has softened the bad parts and enhanced the good parts. So, it’s easy to miss the improvements that have taken place over time. The improvements are subtle and whereas the negatives tend to stand out. But, in what other time and place would you really prefer living? If you love sanitation and dislike polio, your options are limited. I’m an educated, upper middle class white guy living in the United States, and I struggle to think of a time period more than, say, 20 years ago when I’d prefer to live.  Other than, maybe blue collar white guys from the United States, I doubt there are many other demographics who can say things were better for them at other time periods either.

Encourage your kids. Be proud of them. Be hopeful for the future. I figure one mark of good parenting is producing a child who is more capable than you were. It should be the fervent hope of each generation that the next generation will be an improvement on their own. That, more than victory in war, rising skylines, accumulated wealth, or even a moon-landing, is a mark of greatness. And that, my friends, is why we have band day at the State Fair!