You are here: Home / General / The Free Market Begins with a Fence

This was part of an even longer post I wrote a few years back. I stumbled across it again recently and thought it was worth a re-post.

The free market begins with a fence 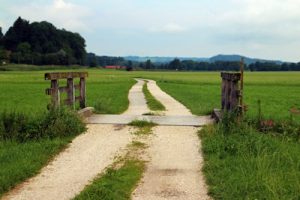 As I went walking I saw a sign there
And on the sign it said “No Trespassing.”
But on the other side it didn’t say nothing,
That side was made for you and me.

Part of the resistance to making different choices about the free market and the various priorities given to property rights is a denial that choices have been made in the first place. “Property isn’t a choice. It’s a ‘natural’ right.” With all due respect to John Locke and the Founding Fathers, property does not exist in a state of nature. Without human-made laws and a government to back them up, you don’t have property. You have an opinion. Where there is a difference of opinion, in the state of nature with no government, the person who can bring the most force to bear is going to win the argument. (And, I might mention, that it really grinds people’s gears when I point out that there is no property without government. They think they hate government, and they love the idea of property rights. The idea that property rights are dependent on government seems to create a cognitive dissonance that must be really uncomfortable.)

In a state of nature, land belongs to everyone and no one. That changes when you can separate your land with a fence provided that you can also have government employees with guns convince the rest of the world to respect your fence as something more than a flimsy barrier. Having established ownership to the land, you can claim rights to the crops grown there and the minerals underneath the land. You can demand compensation for these things. You can withhold them from others altogether. Where once people could theoretically live off the land without your say-so, now they are forced to go elsewhere, pay you, or do work for you in order to use that land. And then we’re off to the races – a system of property laws, contract laws, courts, and police enforcing those laws form a structure without which markets would not work.

And none of this is inherently bad. Let me repeat for the benefit of those who might think my intent is to savage property rights: I like property rights. Property rights and the markets that they allow have done a great deal of good. Why bother working, creating, or taking risks if you cannot lay claim to the fruits of those endeavors? But, striking the appropriate balance can be tricky. When people work collaboratively to create value, how do you allocate the profits from that effort? The Panglossian view is that “the market” will magically allocate profits to people according to their worth. We can rest assured that, if the market is allowed to work without government interference, money acquired is money earned. But the existence of markets is a product of government interference. No government means no property and, therefore, no market. So, as the joke goes, we’ve already established what you are, now we’re haggling over the price. The market doesn’t reward value, it rewards leverage. Bringing more value to the common endeavor is a form of leverage. But so are property rights. Being able to keep your labor or machines or product on the sidelines until prices rise — without worrying about how you’re going to feed your family — is another form of leverage.

We can adopt policies that alter the leverage various people have in a transaction and alter the allocation of profits from economic activity. Some options could definitely lead us to a worse place – the Soviet Union and Venezuela are flamboyant examples (although, I guess I’ve seen some stats that suggest the lot of your average Russian peasant actually improved under Soviet policies, so your starting point matters). What do I have in mind? An increased minimum wage, stronger rights for unions, single-payer health care, better public transportation, more walkable neighborhoods, and increased spending on schools and particularly paying teachers more and giving them more control over teaching, incentives or laws for fewer hours worked and improved benefits, better unemployment benefits and family leave benefits, maybe even a Universal Basic Income. How are we going to pay for this? Taxes obviously.

And, I guess there are three basic reasons why I’m o.k. with this: first, there are some instances where we get more bang for our buck spending through the government than we do going through the private market; second, I’m o.k. having less money if I end up happier; and third, there’s wealth disparity that could stand to be redistributed. (See above, wealth acquired isn’t necessarily wealth earned).

Contrary to conservative dogma, sometimes the government is more efficient than the private market. The big example I have in mind is healthcare. Other countries with significant government regulation of healthcare markets get the same or better healthcare results for their people than the U.S. does. There isn’t an example in the world of a less regulated healthcare system that delivers better results for less. My tiny example is in-house printing at the Legislative Services Agency. LSA used to hire out printing of the General Assembly’s bills. When they attempted to bring it in-house, they met stiff resistance from a conservative Senator who took it as a matter of faith that having government employees do the work would raise the price. It saved millions with a two-thirds reduction in printing appropriations. I’m not, by any means, suggesting that the government is always more efficient than private spending; but sometimes it is. So, we should dismiss it out of hand. If I’m paying money out in taxes rather than paying it out in insurance premiums, I don’t mind the higher taxes. It’s all the same to me if I’m getting health care. I’m delighted if I’m getting more and better health care services.

Second, I also don’t mind higher taxes if I end up poorer but happier. I might be an outlier here, but if I have less spending money, but my community is healthier, happier, better educated, and generally more functional, I think I’m going to be happier. Not because of any excessive altruism on my part, but because living in such a place ultimately brings me more joy than I’d get from having those extra tax dollars in my pocket.

Third, the wealthy are just hoarding a lot of the wealth. I don’t think having that extra money to flow to them has a lot of social utility. If everyone gets paid the same regardless of effort or output, then the economy is going to flounder. Why bother working, investing, or creating? But there has to be a point of diminishing returns. Is a guy really going to work harder for a billion than he does for a hundred million? If not, then you’ve wasted $900 million which could probably be put to better use elsewhere. There’s some fat we can trim here.

I could be wrong, of course. But there is a fair amount of evidence, both historically and internationally, that what we have now is not inevitable and is not the best of all possible worlds. We need to look at what’s working elsewhere and cultivate our garden.