Matt and Suzie getting the morning started.

The adults were up and about at 8 a.m. and went foraging. Up the hill was Pastelaria Baga Baga, a little pastry shop that we went to a few times. The coffee was good and the pastries were cheap. So, we ate pasteis de nata (a type of custard tart) and drank coffee at a table on the sidewalk, then took breakfast back for the kids. Then it was time to get walking. The first stop was Castelo de São Jorge, a place that has probably been fortified for a couple thousand years. The Moors built fortifications in the 900s and the Portuguese took it back during the Second Crusade. It was a pleasant place to stroll around as a tourist. Storming it as a hostile soldier must’ve been a nightmare. For most of the crowd, the peacocks on the grounds seemed to be the central attraction. I was partial to the views, the concession stand selling Sagres, and the sign next to a statute of Manuel I imploring visitors, “please do not lean on the foot.”

A note on the beers in Portugal: primarily they sell two kinds, Sagres and Super Bock. Most places will have one or the other but not both. With the huge selections we tend to have in U.S. establishments, there was something refreshing about being able to order “a beer” and getting whichever of the two they have on tap. Both are pleasant, if unremarkable. They put me in mind of Mexican beers, “Dos Equis” kept jumping to mind. As between the two, I’m on Team Super Bock. 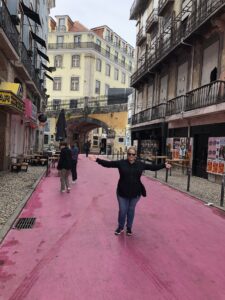 That Pink Street sure is Pink!

Once we were finished with the castle, it was time for our first trolley ride. Amy had acquired 72 hour Lisboa passes for us which got us on and off the public transportation for no extra charge. The trolleys are very useful in a town as hilly as Lisbon. You need to have good balance and not mind crowds because they can get pretty full, and you’ll have to stand. I can’t imagine what Lisbon is like for folks who aren’t able to walk very well. Still, for us, the trolley rides were fun. We headed down to “Pink Street” which, true to its name, is a street painted pink. That stop was fairly underwhelming. I think it’s more of a night life type area, and there wasn’t a ton for a family of four to see on an early Tuesday afternoon.

From Pink Street, we took a tram to the Belém area where we saw Belém Tower, Padrãodos Descobrimentos, and Jerónimos Monastery. Of these, Jerónimos was the most interesting. The architecture is just stunning, and it contains the tomb of Vasco de Gama. The Monument of the Discoveries is a giant slab that takes the shape of the prow of a Portuguese caravel. It features Prince Henry the Navigator at the point, flanked by Portuguese discoverers. It was erected in the 1950s and 60s to commemorate 500 years since the death of Prince Henry and celebrate the Portuguese accomplishments during the Age of Discovery. Doing anything to commemorate that era is bound to generate mixed feelings, and this was no exception. Its importance to the Portuguese and the course of human history can hardly be overstated. Those voyages of discovery connected the civilizations of the world. That said, the impact of slavery, spread of disease, and misery that followed in the wake of those voyages can also hardly be overstated. A monument that is purely celebratory is going to miss the mark. At least it did for me, even as I was glad to see it. In particular, the limestone square adjacent to the monument, depicting a compass rose and a map of the world was stunning.

I would have liked to visit the Maritime Museum which is also in that area, but time simply did not permit. We had scheduled a food tour for that evening. We met our guide, Irene, at the Rua Augusta Arch. The arch and that whole area of Lisbon were constructed after the 1755 earthquake. I’m sure students of architecture will flinch at my characterization, but the layout is on the Enlightenment model – all straight lines and symmetry. I had forgotten about the earthquake until this trip, but the first time I learned about it was reading Candide where the fact of the earthquake and the destruction it caused were some of the challenges to Candide’s Panglossian worldview. 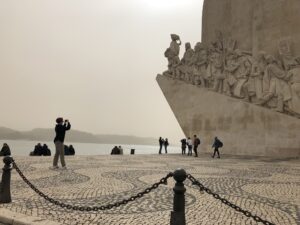 Harper at the Padrãodos Descobrimentos

Our food tour guide, Irene, was a chef native to Italy who had lived in Lisbon for several years. (In fact, for whatever reason, all of the people who showed us around Portugal ended up being foreign to the country. Fabiola who drove us from the airport was Brazilian, Irene was from Italy, our food tour guide in Porto was French, and our Harry Potter tour guide in Porto was Brazilian.) The Lisbon food tour and the restaurants that Irene picked for us were fantastic. We had eight people in our crew, so we hogged most of the tour slots, but along with us were Nicole from Philly and Nathan from D.C. The first stop was Mantegeria Salva where we had meat, cheese, bread, and port wine. I’m certainly doing the food a disservice by failing to be more specific with my descriptions, but those details escape me. All I can say is that it was a great start. (I will mention that they had a cod refrigerator out on the sidewalk with the front wheels sitting on blocks. It was not the most stable design choice! No harm done, but there was a scare when those wheels came off the blocks.) The second stop was my favorite, Cantinho do Aziz, featuring cuisine from Mozambique. We had two kinds of samosas, one with meat and one without. Despite my carnivorous ways, the vegetarian option was easily my preference. There was also a curry dish that was pretty amazing.

I neglected to record the names of stop three, but it featured cod and potatoes. The potatoes were a kind of chip that struck exactly the right balance between crisp and soft. Irene said she was still trying to figure out how they did it. The last place was Amuralhas Tapas e Vinhos where, as the name would suggest we had wine and a number of tapas dishes. In particular, I recall the flamed sausages were good. We also had shot glasses of ginjinha, a sweet cherry drink (that you sip and do not shoot). I’m glad we had it because it’s a distinctive drink in Portugal, but it was a little sweet for my tastes (as was the port – which is why, even though I like wine, I ended up primarily drinking beer.) The guided food tours (we did another one in Porto) were Amy’s idea. She’s right that these are a great way to get introduced to a new place.

According to the data from my watch, we finished the day having climbed the equivalent of 146 floors and having walked about 12 miles. 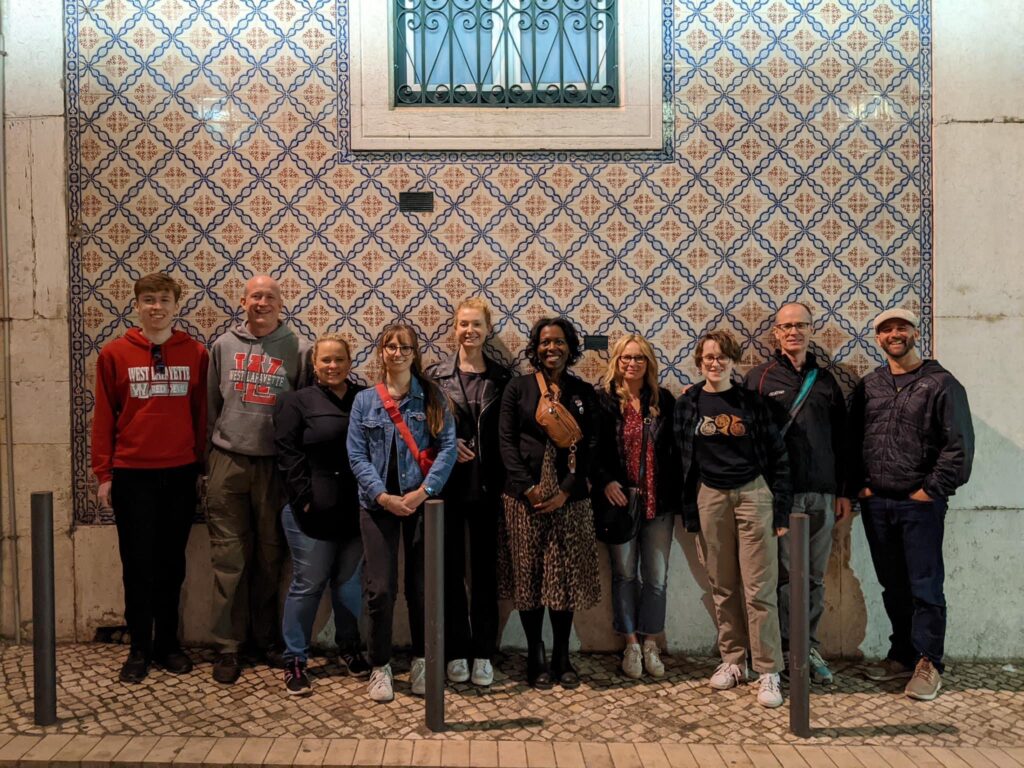 On the food tour: our crew plus Nathan from D.C. and Nicole from Philly.