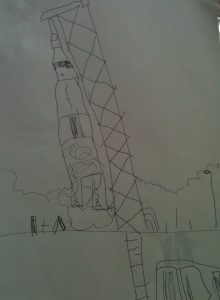 Today marks the 50th anniversary of the moon landing. I grew up in the shadow of that achievement. I was born about two years after the landing and about a year before the last moon landing in 1972. But, even after the moon landings, we had Skylab and the space shuttles. Tang and Star Wars. “As seen on TV” commercials would breathlessly tout that their products were made from “space age polymers.”  In the mid-70s, my Dad had a farm out in the country. When I’d stay there on the weekends, sometimes my step-brother & I would sleep outside. Satellites were still rare enough that we’d get excited pointing them out as they crossed the sky. (“It’s moving, so it’s not a star. It’s too high up to be an airplane. It’s a satellite!”)

I’d always had a healthy respect for the space program, but when the HBO miniseries “From the Earth to the Moon” came out, I was at an age where I could more fully appreciate just what we had accomplished. The audacity and complexity of the undertaking were firmly impressed upon me. What’s more, having a pretty good background in history, I had a more nuanced appreciation for the wonder of it all. Sure, when I was a kid, there was definitely a “wow” factor. But meeting Fleegle from the Banana Splits at King’s Island was pretty cool too. For millennia, humans had been staring up at the moon, telling stories to themselves about it. Only in recent centuries have we had a correct understanding of what the moon was and how it traveled in space around the earth. And I have the good fortune to be born within a couple of years of when we figured out how to throw some guys into a can, launch them beyond the Earth, and with computing power that would be laughable in a telephone these days, manage to land them in a spot 240,000 miles away and bring them back again. That is phenomenal.

Remember back when the future was great? We need to make the future great again. We need to fill our kids with a sense of hope and wonder instead of existential dread and despair. We need to commit ourselves to a cause that’s larger than ourselves. This need for a cause to unite and motivate us is not unique to our time. However, way too often war is the only cause that seems to rally a people together. I’ll scream bloody murder if my tax dollars are taken from me in order to feed a guy who is sitting in his trailer feeding his opioid addiction; but, take my tax dollars so the same guy can go get killed while trying to shoot some foreigners and I’ll regard it as my solemn duty. Ultimately, in practical terms, both the addiction and the war are a waste. Far better if we had neither to begin with. Far better if we could avoid war and battle the sort of listless ennui that makes people feel hopeless by collectively getting our shoulders into a project that’s God Almighty huge. We have the technology, we have the people willing to work. People are willing to sacrifice when they are convinced of the cause. What we lack is something productive to do. We — or at least too many of us — lack purpose.

The question is, what can our generation do that gives young people today the same sense of hope and wonder that Armstrong, Aldrin, Collins, Kennedy, Johnson, and the whole Apollo 11 team gave us? If we don’t come up with something, I’m pretty sure it’s going to be a war of some sort that comes along and fills the void. We need to make the future great again.