As COVID spirals out of control in Indiana and with re-election secured, Governor Holcomb is apparently revamping the COVID restriction system for Indiana. Instead of the five stage re-opening plan announced earlier this year, there will be a county-by-county set of restrictions based on whether the counties have a red, orange, yellow, or blue coding on the State’s dashboard. The color coding is based on the county’s number of weekly cases per capita and its positivity rate.  According to news reports, social events in orange counties will be 50 or fewer (unless there is a health department approved plan) and extracurricular school events will be limited to 25%.  Red counties will be limited to social events with 25 or fewer (unless there is a health department approved plan), senior care activities are suspended, and school events are limited to participants and parents. I haven’t seen the actual order from the Governor yet, so this is me paraphrasing the newspaper summary — omitting the “ought to” provisions and descriptions of things that are already permitted. (For example, “Local officials can consider limiting hours at bars, nightclubs and restaurants” — they can already do that.)

The mask mandate will remain in place. I don’t see it in the material I’ve linked above, but I thought I read something about the State making money available to communities that enforce the mask mandate. I’ll be interested to see what that’s about. 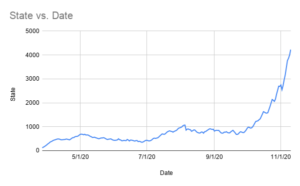 The number of new cases per day were holding relatively steady until about the beginning of October when things went screaming upward. Our death rates are up, our new cases are up, the hospitals are starting to feel the strain. It’s hard to avoid the conclusion that Gov. Holcomb would have felt more freedom to act sooner if the election had been earlier. The right wing of his party is howling that having to wear a mask is tyranny and the Democrats weren’t likely to give him much credit regardless of what he did. I would have liked to see more political courage from him. But the hell of it is that it shouldn’t require that much courage.  Rather than fighting him on this, Hoosiers should welcome guidance on how to get past a pandemic that’s cost 4,500 lives in our state alone.  Instead, a shocking number of Hoosiers can’t manage to keep a mask over their nose.

There’s encouraging news about a vaccine, but it’s far from a sure thing and it’s going to take awhile to roll out even if things go perfectly — which they won’t, because our federal government is an incompetent shit show at the moment. So, this winter is going to be tough.