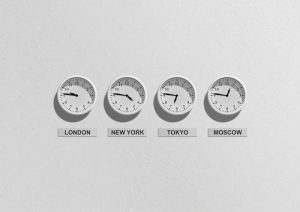 For some reason the U.S. Department of Transportation has put Indiana on Moscow time.

It’s been a long time since I had a good time zone post. Those who have been reading for a long time might remember my extensive — some might say “excessive” — blogging about Daylight Saving Time and time zones. But, there hasn’t been much activity recently. Even if folks aren’t necessarily happy with where we’ve landed, I think people have mostly made their peace with it.  But, my anecdotal sense of the matter isn’t necessarily the reality of how people feel.

In any case, Rep. Thompson has introduced House Concurrent Resolution 3 which urges the legislative council to assign an interim study committee to study the time zone issue. A quick note on resolutions: These are not bills and resolutions do not create legislation that will become part of the Indiana Code. There are three types of resolutions: joint, concurrent, and simple. Joint resolutions are used to propose amendments to the Indiana Constitution. They have to be passed by both chambers. Concurrent resolutions don’t have the force of law but are passed by both chambers. They’re useful for purposes such as this where they are expressing the will of the members of the General Assembly with respect to some issue about how the body will conduct itself (e.g. in this case, urging a topic for a summer study committee). A simple resolution also does not have the force of law but is used to express a sentiment of a single chamber – often a tool for a ceremonial recognition of a constituent or local organization.

This time zone study resolution makes the argument that an interim study committee should look at putting more of the state on Central Time. It says asserts that the technological reasons for Indiana switching from central to eastern time in the 1960s have come and gone — there is no longer a need to be in the same time zone as banks and TV stations out of New York. And, by remaining in the eastern time zone instead of returning to the central time zone, we make it unnecessarily difficult to do business with California which is the world’s 9th largest economy. It also argues that the longer morning darkness in the eastern time zone puts kids in danger as they wait for buses and disrupts their biological clocks which, in turn, causes health problems.

This is another one I don’t really see going anywhere. But, then again, I didn’t think Indiana would adopt Daylight Saving Time in the first place. Back when DST was being considered, the time zone issue was largely dodged. In fact, I’d argue that if the fact that we’d be on eastern daylight time had been made explicit during the run up to the DST vote, it would not have passed. (It passed by the absolute thinnest of margins as it was.) Even so, I doubt many members of the General Assembly are excited about picking this particular scab.