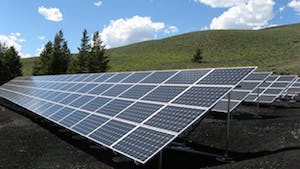 I think this array would look nice on my front lawn.

It states that an HOA can’t ban a homeowner from installing a solar energy unit. The HOA can require preapproval of the location and manner of installation. The legislation incorporates the definition of solar energy unit from IC 36-7-2-8 (which declares Indiana’s support for solar energy and restricts local government’s ability to adopt ordinances that impair the use of solar energy):

(1) any solar collector or other solar energy device whose primary purpose is to provide for the collection, storage, and distribution of solar energy for space heating or cooling, or for water heating; or

(2) any structural design feature of a building, whose primary purpose is to provide for the collection, storage, and distribution of energy for space heating or cooling, or for water heating

I note what I think might be a mistake in drafting, however. It has a number of exclusions — for example the HOA can ban the solar energy unit if there is a court order saying it’s dangerous. But, in this laundry list of exceptions, you have:

A homeowners association may prohibit a solar energy system if any of the following apply:

(5) The solar energy system is located in an area other than on the roof of the dwelling unit or of another structure.

(6) The solar energy system is located in an area other than in a fenced yard or patio owned and maintained by the owner of the dwelling unit.

I’m also a little confused by the language that says “except as provided in IC 36-7-2-8, a homeowner’s association may not prohibit the owner from installing a solar energy unit.” That section speaks to a municipality’s ability to adopt ordinances that impose reasonable safety restrictions on solar energy units. It does not, so far as I can tell, have anything to do with HOAs. The only thing I can think of is an ordinance that delegates some kind of safety review to an HOA. But that would seem unusual.

I assume this legislation arises out of a situation where an HOA has stymied a homeowner’s desire to install solar. I also assume that the HOA was concerned about its appearance. The statute attempts to address aesthetic concerns to some extent by, for example, saying that an HOA can impose certain requirements such as precluding the system from extending above the roof, limit the color of piping, and a few other things. If it’s on the patio, the HOA can require that the system not extend above the fence line.

I don’t have strong feelings about this. I like the idea of encouraging and allowing homeowners to use solar if they want to. But, I also know that homeowners can sometimes make garish choices that have an impact on neighbors and that the politics of HOAs can be difficult.