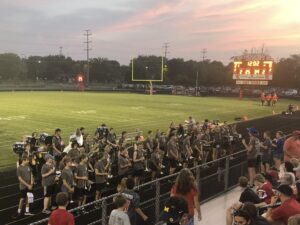 My growing disinterest in politics as an on-line game is spilling over into the real world. Last night, Bernie Sanders came to town. He was speaking less than two miles away from where I live. On the other hand, my kids were playing in the marching band at the high school football game less than one mile away. I don’t have any particularly negative feelings about Sanders himself and, politically, he very accurately identifies some of our problems, and I’m on board with many of his solutions. That said, I’m still pretty raw about the comportment of a number of his followers. During the 2020 primaries, I was mostly supportive of Pete Buttigieg. Too many of Sanders supporters — not Sanders himself — would’ve had me believe that Mayor Pete was a racist corporate stooge who controlled the price of bread and wasn’t that smart, actually. I didn’t see much of this from other candidates’ supporters, so it wasn’t just a generic primary fight issue. It was a strategic, scorched-earth choice on someone’s part — probably more prevalent online than on the ground.

But, truth be told, my lack of interest in the Sanders event didn’t have much to do with the scars of the primary. I actively wanted to be at the football game. I like football, and I love the community. Schools are the heart beat of a community, and this is part of why that is. There’s just something I love about gathering in the stands with people I know, cheering the good guys and booing the bad guys (and eating slightly stale, over salted popcorn from the concession stand). These are people I mostly don’t know well, but who I know well enough. Many of us have been bumping into each other at school events for a decade now. When Twitter and Facebook got going a dozen or so years ago, one of the things they promoted was referred to as “ambient intimacy.” You don’t see that so much any more once the algorithms took hold and the chronological timelines were obliterated. But, it used to be, you’d get a lightweight look into the lives of friends and acquaintances. These people would never call you up to tell you that their six year old did a cool tumble at gymnastics, but you’d see it in passing online and, if you ever did bump into them, you’d know that they had an elementary school kid who was into gymnastics. You get some of that in real life with the crowd you see at the football games. (Yeah, I know, there are people laughing at my framing real life as a spin-off of online life here when the reality should be the opposite.)

Also, let me take a moment to gush about my kids & the marching band. My son is a senior in high school and my daughter is a junior. The band community has become central to their adolescence. When they’re not studying, their primary extracurricular activities revolve around the band. They march, they play at games, their band mates make up their social circle. It’s pretty common for a crew of 10-12 of them to gather in our back yard after football games. (The fun went on past midnight last night). The band parents are a pretty fantastic group — almost all nice people, friendly and dedicated to their kids; they tend to be joiners and volunteers, happy to pitch in for a cause. The whole thing – seeing them wail on their instruments, shouting support to the team, goofing around with their friends – it’s all a source of joy and community. These are the things that bring us together and help make a place good to live in. I’m just thankful to have the opportunity to participate.

Oh, and you’ll all be happy to know that West Side beat McCutcheon 30-7.