I think I mentioned a few weeks ago that I was actively working on the school funding referendum for West Lafayette Schools. I’m not looking up dates, so I might get some of this slightly wrong, but in 2008 or thereabouts the State shifted the school funding model. Instead of coming mostly from local real estate taxes, most school general operations would be funded from the State’s general fund. This was partially in response to some more generalized property tax problems. (Here is a post from 2007 with some of the history to that date — quoting, in part, Everybody’s Favorite Economist ™ Larry DeBoer.) Almost immediately thereafter, the national economy hit the skids. The State cut school funding.

In 2012 (I believe), West Lafayette’s school superintendent, Rocky Killion, wrote a column entitled “The Demise of Indiana Public Education” that speaks to the history as it pertained to West Lafayette Schools up through 2010. This history was echoed in a December 2016 presentation (pdf) by Dr. DeBoer. The upshot was that over the course of about 25 years, just about every decision made by the General Assembly in terms of school funding, sometimes by design / sometimes by happenstance, worked against West Lafayette schools.

That said, the General Assembly did make available the referendum process as a tool to help West Lafayette right the ship. So, in 2010, there was a hard fought referendum battle on the question of whether to permit imposition of a local property tax increase of up to $0.43 per $100 of assessed valuation. A lot of money was spent on both sides. A group of local landlords were the primary opponents of the measure. But, after the dust settled, the community supported the measure by about 2 to 1. The money was well spent. West Lafayette has a lean administrative staff (probably too lean, truth be told) and our schools are consistently rated among the top (if not *the* top) school corporations in Indiana.  I suppose the argument could be made that we could make due without referendum money and settle for average performance. But, as a community, we embrace education in a big way.

The way the referendum law is set up, we had to renew the rate authority after seven years. Taking a look at the past budgeting, even though the school board had authority to impose a rate of up to $0.43, it had never gone above $0.37. So, when seeking to renew their authority, the school board lowered the requested authority from $0.43 down to $0.37. As some of you might remember, I lost my run for school board by 4 votes in the November 2016. One of my last acts as a lame-duck school board member was to vote to proceed with the renewal referendum. Then I joined the campaign to get the renewal passed. (I should note that the vote to proceed was unanimous and the member who replaced me was active in the referendum effort as well — so it would have proceeded regardless of my vote.)

I can’t say I campaigned that hard for my own school board seat. I should have done more. But, I had never campaigned for anything before (I had been appointed to fill out an existing member’s term) – and self-promotion isn’t something a Midwestern kid is raised to be comfortable with! The referendum campaign was very different. It was a lot more important than my board seat, I had just received a lesson on close campaigns (with the Presidential election — a lot of us are still receiving that lesson), and campaigning for an issue like this was much more in my comfort zone.

A pro-referendum PAC called “Friends of West Lafayette Schools” was formed with some local dignitaries at its head. (For example, former  West Lafayette mayor Sonya Margerum (Democrat) and former state representative Sue Scholer (Republican) were co-chairs.) Being a part of that effort was educational, gratifying, and enjoyable overall. I got to knock on doors with a number of people (including Sue)  — which turned out to be something I unexpectedly got a kick out of.  But my favorite co-campaigners were my kids. We had a data-entry app. I’d talk, and they’d thumb-in the results.

I was able to meet or get to better know others involved in the campaign. Developing relationships is an underappreciated aspect of community efforts. The community is strengthened not just because of the goal that is the focus of the effort. It’s also strengthened by the act of working together with your friends and neighbors.

Ultimately, as the headline indicates, the school funding question passed in a landslide: 94.27% of those voting. Those are third-world dictator numbers! Of 2,233 votes cast, 2,105 were in support while 128 were against. I’m told that’s a state record of some sort. The strong support of the community is good to see, but it does strongly suggest that this effort was something of a waste: kind of make-work imposed by the state. There was no real appetite to eliminate the current tax rate. The burden is reasonable and the results of that funding have been very good.

But, that’s all the complaining I’ll do for now. The result was very positive, I made some new friendships & strengthened some old ones, and I got to walk around my community while chatting with my kids. I’m definitely putting this one in the win column.

And, in closing, I’m sharing a picture of a Kirk-gnome being attacked by a wee-Gorn that I saw in a rock garden while I was canvassing. 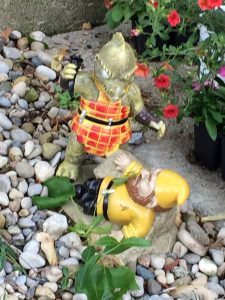 Kirk needed a little convincing to vote “yes” on the school funding question.